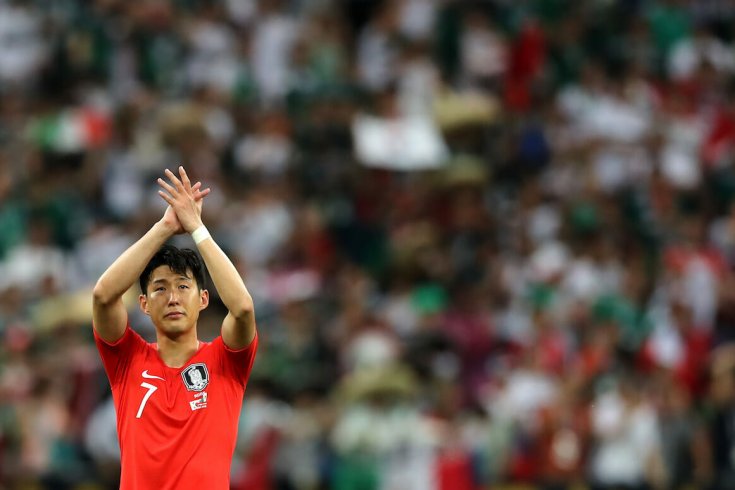 The World Cup is a glorious display of masculine melodrama. And one of my greatest pleasures is watching men weep. Mexico’s Javier Hernández shed tears of joy after beating the last cup’s champions, Germany. Panamanian commentators bawled when hearing their national anthem at the cup for the first time. South Korean forward Son Heung-min broke down after a loss to Mexico. In one of the most stunning scenes, an Iranian fan cried green tears down his flag-painted face.

Commentators often mock soccer players for supposedly exaggerating their falls and faking their pain. When José Giménez started sobbing at Uruguay’s loss to France before the match even ended, a British pundit called it “embarrassing.” This disdain implies an unspoken accusation: the players are not “real men” because they don’t present themselves as invincible. Hockey and American football, instead, are more favourable forums for idealized masculinity: players appear as fearless warriors, their flesh hidden behind thick padding and masks. Such athletes might cry after the game, but during play, the “armour” of hockey and football covers their body and face. In soccer, players have little more than thin, polyester jerseys protecting them from cleats, elbows, and knees. Perhaps it’s this physical vulnerability that helps open the door for male emotions.

There’s something refreshing about seeing such emotions, especially if you’re from a prudish country like Canada where we frown on male expressions of sorrow, hurt, and heartbreak. As Rachel Giese pointed out in Saturday’s Globe and Mail, men’s tears are policed if they aren’t seen as properly “masculine.” But not only do World Cup players defy this repressed model of masculinity, they also provide an exercise in empathy for fans: we feel every loss, every epic comeback, and every quest for redemption. When Germany was booted out earlier than any year since 1938, it was a lesson in how giants fall—tragic or comic, depending on how you relate to Germany’s past. Those who support underdogs, like Iceland and Egypt, hope for David versus Goliath victories. Brazil fans hope for redemption after 2014’s staggering 7—1 loss to Germany. Belgium, down by two against Japan, gave a lesson in resilience by relentlessly coming back to win 3—2. England, having mythologized its underperformance on the world stage, battles with its own postimperial self-hatred in its now-foiled attempt to bring the cup “home.” Political viewers can root for the colonized against their colonizers; multiculturalists can favour teams with the children of immigrants, like France’s Kylian Mbappé.

In part, these narratives reflect struggles over ideal principles: justice, honesty, perseverance, or the quest for human perfection. But it also feels as though sports, like art, provide catharsis—a word with an ancient Greek origin that Aristotle famously repurposed to describe the purifying, releasing effect of tragic theatre. We feel, live, and die with our favorite actors and athletes. And in the World Cup—where our heroes and villains enact a wider spectrum of emotional vulnerability—the spectacle enables a more honest story about the ways that men are fragile.

Still, I can’t help but wonder if men project, onto the screen of sports, emotions that we can’t feel directly in our everyday lives. I myself burst into inexplicable tears after Croatia beat Denmark in penalty kicks. The match was dull, and I don’t care about either team, so where did my emotions come from? Penalty kicks are high stakes: each player is tested individually, in front of the world, as their teammates all link arms behind them. To miss the goal entirely is to court a lifetime of shame. So when the final Croatian put it in, and his teammates raced to embrace him, I cracked.

But why would something so disconnected from my real life move me to tears? Was it the theme of being tested and validated as worthy? Was I moved by seeing a team, a community, rally around one of its own as he confronted an heroic challenge? In a culture that represses emotion, men are usually forced to face their struggles with self-worth alone. The World Cup provides a stage on which we can do it collectively.

As a standard-issue white dude raised in a culture where “boys don’t cry,” it took me over forty years to learn how to let it out. Like other men I know, I would only cry in private—and usually over something unrelated to me, like a sentimental movie preview or a Coke ad. Like many men, I’d just tamp down my sadness and instead occasionally blow up in anger. But after I recently had my heart broken for the first time, something bizarre happened. I started bursting into tears all over the place. On sidewalks, bike lanes, at dinner parties—I was too distraught to care what others thought. If the tears came, I just let them flow. And it was amazing! I learned that crying was the most rational, effective, and productive way to get over it. I felt no shame and no anger. I felt raw, vulnerable, and incredibly sad. I felt my feelings—and I healed.

Not all tears are treated equally on the pitch. When the Brazilian superstar Neymar fell to the ground, bawling after scoring a late-game goal against Costa Rica, commentators debated whether or not the tears were genuine or crocodile. When Neymar was tripped and rolled dramatically down the field, the internet exploded with memes mocking him. Many think Neymar is performing soccer’s dark art: cheating in order to win. Before Brazil’s last game, a Swiss broadcaster calculated that Neymar had spent fourteen full World Cup minutes writhing around on the grass. An article by the New York Times had a drama teacher critique his acting. Mexico’s coach even said that Neymar should stop clowning around because soccer is a sport for “men.” But the more Neymar fell, rolled, and wailed, the more I loved him. Isn’t it inspiring to see that even superstars need to have a meltdown? Neymar has since been painted as the unofficial villain of this World Cup. But, unlike Luis Suárez—who, at the 2014 World Cup, bit another player—Neymar isn’t violent. He isn’t injuring others or starting fights like a hockey goon. His only crime is melodrama. Do people hate him because he feels too much? I started to wonder whether his histrionics were necessary for one of the world’s highest-paid athletes to keep performing under pressure. Perhaps Neymar—like male fans around the world—needs his own release valve to remain connected with pent-up emotions.

Let’s be clear: soccer can also be a breeding ground for toxic masculinity. Both winning and losing can spur on bullying and violence, and hooligans often add racism to the mix. But if the choice is between tears and toxic anger, I say, “Cry away, boys!” A culture that mocks men for crying in public leaves us alone and ashamed. Don’t believe the hype: behind closed doors, dudes are fragile. Believing they have no choice but to repress that vulnerability leaves some men with only one option: anger. Defusing toxic masculinity, in other words, requires more than simply calling out destructive male behaviour: we also need to allow men to release a wider array of emotions.

The World Cup provides an epic drama where men can identify with emotionally vulnerable heroes. As the players struggle through life’s challenges, so can we. This Sunday, pick a team, and lose yourself in the melodrama. Let your heart get broken.

Joseph Rosen (@TheJosephRosen) teaches at Dawson College in Montreal. He has written for publications including Maisonneuve, the Montreal Gazette, and Shtetl Montreal.