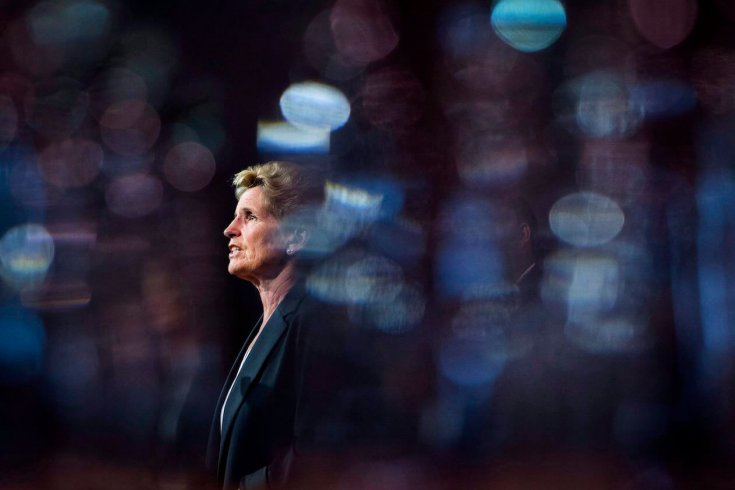 Photograph by The Canadian Press/Nathan Denette

Just days before the Ontario election, Kathleen Wynne conceded that, come Friday, she will no longer be premier. It was a shocking admission, not because it was controversial—according to polls, Wynne was merely stating the obvious—but for the devastating knock-on effect it could produce for Liberal candidates across the province. For many voters, Wynne’s abdication will confirm their sense that the Liberals are a spent force, and that, for those who want to stop Doug Ford, the NDP is the only viable option left. On Wynne’s part, the decision seemed motivated by a belief that her own staggering unpopularity has been harming local Liberal candidates. Her own fate was sealed: “And I’m OK with that,” she said. “It’s not about me.”

This election, however, has only ever been about her. Doug Ford, hyped by some as the Canadian incarnation of Donald Trump, has proven to be mostly an empty vessel for voters’ resentments. Andrea Horwath has led a campaign that’s been inoffensive at best, but her brand of vanilla progressivism has hardly electrified the left. Ontario’s next premier will be one of two leaders who just happened to be present while Wynne’s Liberals imploded. Long after the details of this contest—from Ford’s “buck-a-beer” promise to the NDP’s proposed tinkering with tobacco taxation—have faded from memory, what will remain, and what needs to be reckoned with, is the electorate’s white-hot hatred of Kathleen Wynne.

Even if one looked at numbers alone, Wynne could be categorized as one of the most unpopular leaders in Canadian history. While she has been consistently rated the least popular premier in Canada, her current 19 percent approval rating represents an improvement from an all-time low of 12 percent last year. Her approval rating is far lower than Ford’s, and stands at about half that of Donald Trump. Polling indicates Canadians are more likely to believe in the existence of ghosts than to agree that Wynne is an effective leader.

Numbers do not tell the whole story, though. Wynne has always attracted hyperbolic criticism from the far right. Years before Jordan Peterson called her “our devouring mother” and “the most dangerous woman in Canada,” Ezra Levant claimed that Wynne “despises our Western Judeo-Christian culture” but that “she’s an obedient little girl” when it comes to Islam. In a 2015 video titled “Why Isn’t Kathleen Wynne Behind Bars Yet?” Rebel Media cofounder Brian Lilley said she ought to be in a jail cell for alleged party corruption.

The habitual mainstream journalistic portrayals of Wynne as a prissy schoolmarm or domineering tyrant are positively genteel compared to bottomless well of abuse that she receives online. On message boards, in comments sections, and down in the sewers of social media, readers can find the true nadir of the anti-Wynne movement. “F-ck this liberal dog face wh-re” is the sort of thing one sees frequently on YouTube. One Reddit user offered a “Daily Reminder that Kathleen Wynne is a massive degenerate who ruined the lives of her then-husband by cucking him with another woman (he had to move to the basement like a good cuck), and her kids by introducing a second mom into the family.” After Wynne tweeted “I will never stop fighting for a better future for the next generation” next to a photo of her with a toddler in a ball pit, one user responded: “BLAH BLAH BLAH shut up. C-nt.”

People saying mean things on the internet is nothing new, nor is it worthy of a story. It happens in all directions, left and right. Likewise, the fact that the incumbent leader of a party that’s been in power for nearly fifteen years is unpopular is hardly unique. What does seem unique, however, is the sheer intensity of the revulsion. Conservative MPP Laurie Scott recently told Kawartha Lakes This Week that she had never seen a leader “hated as much” as Wynne. Public disapproval has become such an inescapable part of the story that Wynne tried to incorporate it into her belated “Sorry, Not Sorry” campaign slogan. The tactic was doomed to fail. Nobody appears to be asking for an apology from Wynne. For many, the problem was never what she did with her time in office; rather, the problem is who she is.

Wynne’s record as premier is far from perfect. Her government presided over a sharp increase in electricity prices and, by her own admission, badly mishandled the communication surrounding rising electricity costs after the privatization of Hydro One. A generalized sense of corruption has long dogged the Liberals, partly a hangover from Dalton McGuinty’s inglorious exit from office, and partly a result of events that took place under Wynne’s watch. (Think Metrolinx’s decision to approve a $100-million GO Transit station in transportation minister Steven Del Duca’s riding, even after the organization’s own analysis concluded that the station would have a negative impact on ridership.) Such criticisms warrant serious consideration; they may even warrant booting the Liberals from power. But they feel utterly disconnected from the hatred directed toward Wynne herself. It’s safe to say that when a Reddit user writes that “Wynne is an egotistical, sadistic, sexual vampire . . . I will have to put a wooden stake through her heart, cut off her head, stuff it with garlic and then burn her,” the issue isn’t Hydro shares or transit stops.

None of this will come as a surprise to feminists, who have long argued that even as more leadership opportunities become available to women, unreasonable expectations overdetermine how they are perceived in the public sphere. Writing of Hillary Clinton in the New York Times, Amy Chozick said, “She was expected to project the iron of a commander in chief, the warmth of a best girlfriend and the charisma of a drinking buddy. And if she had somehow done all of that, there would still be some essential quality she lacked.” Alberta premier Rachel Notley is subject to routine abuse, and is the most threatened premier in Alberta’s history. Conservative MP Michelle Rempel has retweeted the sexist messages that she receives (and responded to one sexist Twitter user with “that’s Hon. Bitch, P.C. M.P. to you”).

There will always be those who claim that the rage directed toward these women is simply the product of political differences, not gender—but they are in the minority. A 2016 Angus Reid poll found that 59 percent of Canadians believe that it’s easier for men to attain high political office; only 3 percent thought women had the advantage. As Marianne Cooper, Stanford sociologist and lead researcher for Sheryl Sandberg’s book Lean In, put it in the Harvard Business Review, “high-achieving women experience social backlash because their very success—and specifically the behaviors that created that success—violates our expectations about how women are supposed to behave.”

The casualties of the 2018 election will include not only Wynne and the Ontario Liberal party, but also the political culture we share. We can forget the sentimental crap, played up for American audiences, about how enlightened Canadian politics are. How many ambitious, politically engaged young women today, after scanning our premier’s Twitter feed, will now decide that politics is a good career choice? And if Horwath manages to win on Thursday, no one should be surprised when she becomes a target for loathing in the same way. Ontarians will not be able to blame the attack ads, campaign contributions, or shadowy foreign meddlers. This hatred comes from us; and until it’s reckoned with, it won’t be going anywhere.

Ira Wells teaches literature and cultural criticism at the University of Toronto. His work has appeared in The New Republic, Los Angeles Review of Books, The Puritan, and elsewhere.