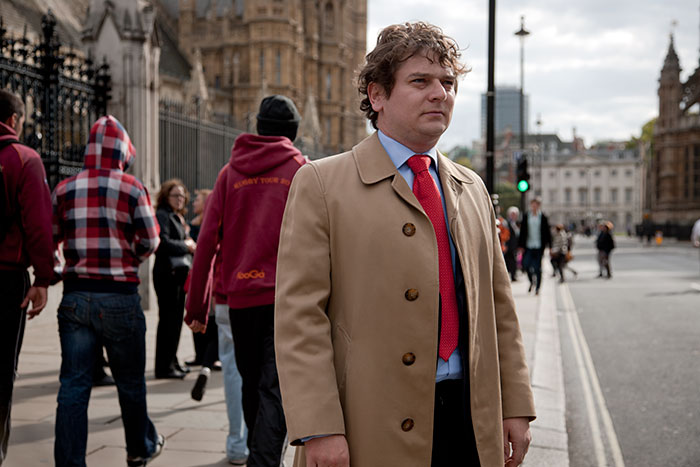 Peter Marlow/Magnum Photos Luke Skipper, SNP chief of staff, near the Palace of Westminster in London.[/caption]

On May 5, 2011, the Scottish National Party won a surprise majority in the Scottish Parliament, and a mandate to hold an independence referendum within five years—the first since the country joined the United Kingdom in the 1707 Union of the Crowns. To a Canadian observer, the situation might conjure up memories of Quebec and its 1995 referendum. The SNP has much in common with Quebec’s separatist parties, driven as it is by centre-left policies and dreams of independence, but with one major difference: the SNP’s political strategy is purposefully non-ethnic. And this is significant, not just for winning votes from a Scottish public that is surprisingly ambivalent about independence (given how 53 percent voted in the last election), but also for Luke Skipper, the party’s Westminster chief of staff. Because Skipper, a fervent Scottish separatist, isn’t even Scottish. He’s Canadian.

Six weeks after the election, at the British Parliament, Skipper met with a dozen interns from Ontario’s Queen’s Park to talk about the SNP’s future and the lessons it might draw from Quebec. Wearing a blue and purple fleur-de-lys tie and a dark blue suit on his short, heavy-set frame, he placed his BlackBerry at the head of the boardroom table and cleared his throat before addressing the room.

The interns might have asked how a foreigner—one who has lived in the UK for six years, just three of them in Scotland—could rise to prominence in the SNP. Skipper grew up in the small town of Kincardine, Ontario, surrounded by the brogues of the Scottish immigrants who came looking for jobs in Canada in the ’60s and ’70s. His stepfather, a welder, spoon-fed his young boy tales of growing up in Glasgow and playing semi-professional football in the old country, and his Celtic band “sang the old songs” at festivals in southern Ontario. A local bagpipe band still marches down Kincardine’s main street every Saturday in the summer.

Converts are often the greatest believers, but Skipper’s brand of nationalism has little to do with the Saturday bagpipes of his youth. When he interned with the SNP, while taking his master’s degree in political science at the University of Edinburgh, it was more for the experience than because of any ideological belief. His eureka moment came when he went to work for the party in the European Parliament and saw how the smaller countries were not held back by their size. “I asked myself why Scotland was so uniquely incapable of doing the same.”

A pragmatic German makes a clean break from his wife 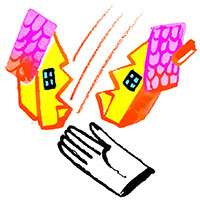 In 2007, as he waited for his divorce to be granted, a forty-three-year-old masonry worker from the town of Sonneberg, Germany, took division of property into his own hands. Police looked on as he measured his one-storey marital home and carefully marked it with cutlines; then he chainsawed through the wooden roof and walls, leaving two four-by-three-metre units, and used a forklift to transfer his half to his brother’s house. “The man said he was just taking his due,” one officer said at the time. “But I don’t think his wife was too pleased.” A similar incident occurred in Cambodia in 2008. Following rumours that his wife had been unfaithful, a man and his relatives sawed his wooden house (which was propped up on stilts) in two. Local law enforcement asked him to reconsider, unsuccessfully.

He and his boss, Angus Robertson, leader of the SNP’s Westminster caucus, have spent the past four years downplaying “kilts, bloodstained faces, Jacobite rule, and Prince Charlie,” as Skipper put it. The SNP wants to appeal to voters’ heads, not their hearts. That strategy worked wonders during the election campaign, which delivered a relentlessly upbeat message about the party’s fiscal management during the previous four years of minority government. The SNP strongly favours immigration as a way of supporting economic growth, which has made it popular with South Asian communities in urban areas, and it is the only party to elect visible minority members to the Scottish Parliament.

“What affects peoples’ lives is not necessarily some battle that happened 300 or 400 years ago,” Skipper said. “It’s the issues that come up in day-to-day life right now, and we’re saying that as an independent country we could make some of those things better. That’s what gets people to vote for a political party.”

When one intern asked if regional success would translate to the national level, where the party holds just six of 650 seats, Skipper acknowledged that he was all too aware of the NDP’s recent sweep of Quebec. “You can’t take support for granted,” he responded.

Until the Bloc Québécois’s collapse in the last Canadian election, Skipper viewed its record and longevity as worth emulating. The previous week, he attended the Saint-Jean-Baptiste celebration hosted by the Québec Government Office in London, and he and other party officials had dinner with the Bloc’s then-leader, Gilles Duceppe, during his 2010 European tour. But Skipper is more interested in drawing lessons from Quebec’s 1995 campaign than in getting involved in the cause. Actually, he sees greater similarities between Scotland’s independence bid and Canada’s own claim in 1867. “The arguments were that it couldn’t survive, that it needed Britain, that it was breaking up links. It’s insulting: ‘too small, too poor, and too stupid.’”

No platform could be more confrontational than pulling apart a country, but Skipper seems to relish confrontation and his position as an underdog. He once wrote an outraged letter to the editor of a local paper when his grade ten teacher tried to indoctrinate the class against Ontario’s Mike Harris government. And he prefers Westminster’s design, where government and opposition face each other at two sword lengths’ distance (“I like the yelling”) over the friendlier semicircle of Scotland’s Parliament.

The SNP has its work cut out for it. A post-election poll revealed that only 29 percent of Scots wanted independence, and nearly half thought Scotland would be financially worse off on its own, despite the party’s claim that the country’s current relationship with the British government is not in its best interests.

The party line holds that domestic oil revenues and the recouped income from Crown estates would leave Scotland just as well off after independence, and it favours domestic control of corporate taxes, development of the high-tech and green energy sectors, and a highly educated workforce.

This argument may be harder to make in Europe’s current economic climate. Sovereign debt fears and the financial collapse of such peripheral countries as Ireland, Greece, and Iceland could serve as ready reminders that the only move that stopped Scotland’s banks from going under was a bailout from Her Majesty’s Treasury. And yet, by September one poll showed 39 percent of Scottish voters favoured independence, just one percentage point ahead of the naysayers; 23 percent remained undecided. All Scotland needs, says Skipper, is some confidence, something he has in spades.

Political opponents have told him that he’ll never fully understand Scottish politics—the subtleties, the nuances, and the legacy of Scotland’s tough times in the ’60s, ’70s, and ’80s. Skipper contends that he has the same right to a role in the debate as any natural-born Scot: “At first, you feel funny making the case, but now it’s pretty comfortable. I can genuinely say I’ve lived here, and I understand the benefits of independence.” If anything, his brand of imported confidence could be an asset. Perhaps what a nationalist movement needs is someone who looks not to the country’s past but to its future.