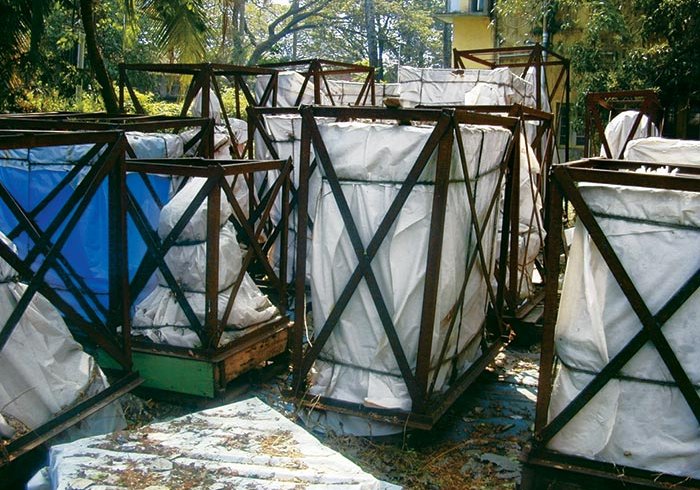 In the spring of 2001, an artist named Claude Simard was driving through the lush state of Kerala, in the south of India. A successful artist, and co-owner of the prestigious Jack Shainman Gallery, a 4,000-square-foot exhibition space in Manhattan’s Chelsea district, Simard had made close to two dozen visits to India over the years. This time, he and a friend were passing through the village of Thrissur, when they came upon workmen demolishing a church, to make way for a larger place of worship. Simard stopped the car, jumped out, and asked them to stop. The men complied. Simard then paid a visit to the local bishop—and ended up buying the structure, a Roman Catholic church built by Portuguese colonists in the Eighteenth Century.

In a burst of inspiration, Simard acquired two more old churches facing the same fate. But he had bought the buildings, not the land, so he hired workers to dismantle all three and move the pieces into a rented storage space. He then returned home to New York, where it struck him what he would do with his churches. He would have them shipped, in pieces, to his hometown of Larouche, in Quebec’s Saguenay–Lac-Saint-Jean region, and he would use them as galleries to display his collection of contemporary art.

Over the next two years, the forty-six-year-old Simard acquired eleven more buildings in southern India for the project: a mosque, a synagogue, a Hindu temple, eight open-sided pavilions (traditionally used as roadside resting places), and two private homes—one of which was a three-storey, forty-room dwelling of brick, granite, and teak, constructed between the Sixteenth and Eighteenth Centuries.

The buildings are already being moved to Larouche, an isolated village with a sawmill, a grocery store, a hardware store, and around 1,100 residents, many of whom work in nearby Jonquière or Alma. They will be reassembled on land, largely municipally owned and donated, around a small lake on top of a wooded hill overlooking the town. The first of the transplants, a small Eighteenth-Century mosque of grey granite that’s large enough to accommodate about a hundred faithful, should be standing in its new home this fall.

Simard has named his unlikely venture the William Larouche Project for the Arts and Architecture, after the sawmill worker who founded the village. “I’m giving myself ten years to complete this,” he says. “It’s going to be very beautiful with the art, the architecture, and the physical surroundings, and I think it will attract people. You wouldn’t expect such a thing in that setting.”

The traditional Indian buildings will be a striking addition to a rugged northern landscape of rock and forest. But the idea of bringing churches to Saguenay–Lac-Saint-Jean is a little like carrying coals to Newcastle. There are already dozens of churches in the region. Most are now empty and neglected, a reminder of days when Catholicism dominated the lives of people here, as in every corner of Quebec.

But Simard’s project is a celebration of art, not faith. The galleries will display works by some of Simard’s fav-ourite contemporary artists, such as Paterson Ewen, Guido Molinari, and Marie-Jo Lafontaine. If any of Simard’s own work ends up on display, that would be entirely appropriate: Larouche has shown up more than once in his art. One of Simard’s New York shows, called Passé composé, included an installation that featured old black-and-white photos of relatives, as well as the names of all 6,000 people who have ever resided in Larouche, spelled out in cloth letters attached to strings.

The project will also be a testament to technology: Simard is calling on engineers at both ends to ensure the buildings are taken apart and put back together properly. A Bombay firm is producing architectural plans and three-dimensional digital images of each structure prior to dismantling. Most were built of blocks of porous clay and straw, similar to contemporary cinder block, and the Bombay engineers are using a laser device to slice through the mortar cleanly and precisely. Each segment of the walls, floor, and roof is then numbered before being placed in multi-modal metal containers that can be moved by ship, rail, or truck.

The churches, like the mosque, are small, but each produces enough material to fill eleven containers. These will be shipped from the Indian port of Kochi to Halifax. From there, they will travel to Larouche, where Simard’s brother-in-law, Daniel Pedneault, will supervise the assembly. At first, Simard was concerned about moving buildings from subtropical India to a place where snow falls as late as April and winter can bring temperatures of minus-40 Celsius. Now he thinks the buildings will withstand the cold, though he will need to install heating systems in the floors. “I have a firm of architects from the Saguenay consulting with architects in India to make sure the whole thing will work,” he says. “They’ve studied the materials, and they said climate would not be a problem.”

Nor, for the time being, is money. Asked about the cost of the enterprise, Simard chuckles. “Don’t ask,” he says, allowing only that it is a multi-million-dollar undertaking. Most of the funds will come from his personal wealth, acquired through the sale of his art and earnings from the gallery, but he is relying on a private investor for advice and some financing. “There’s no government money in it,” says Simard. “It’s a private venture, which, for Canada, is rare.”

The William Larouche Project stands out for another reason. It’s a tri–bute from a native son to the remote, northern community that shaped him. Simard’s mother and his sisters still live in Larouche, and he returns at least once a year. “I was born a collector,” says Simard. “In the back of my mind, I have known for a long time that I had to do something with everything I own. At the same time, I wanted to give back to the community I came from. This was a good solution.”