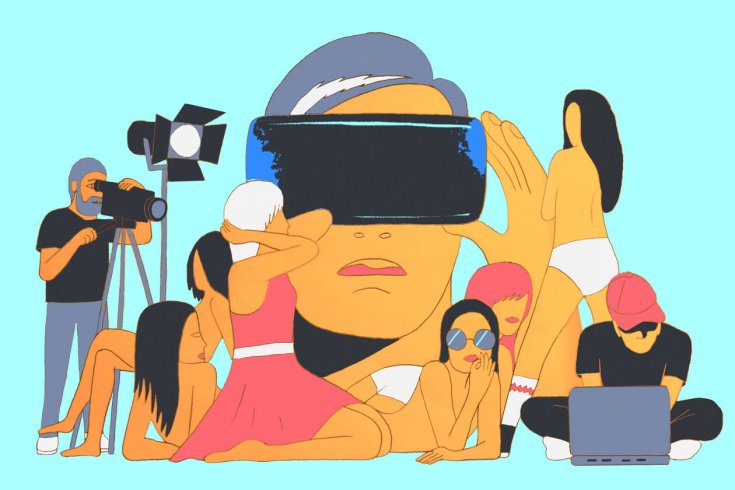 YourVRPorn occupies one of about forty spots at the Qwebec Expo, an annual business convention for the adult industry, held in Montreal’s Marriott Hotel last summer. Attendees occasionally stop to take selfies with performers wearing booty shorts and tight dresses, but for the most part, no one is all that interested in talking about threesomes, double penetrations and MILFS. Here, porn’s power and appeal is incidental to what really matters: how do you turn a profit selling something no one wants to pay for? From the early ’90s until the middle part of the last decade, pornographers made a killing in DVD sales, subscription websites, hotel-room rentals, and paid cable TV channels. While there is a lot of debate how over much the industry was generating at its peak, the Economist in 2015 suggested it could have been as high as $50 billion a year. Trade shows like the Qwebec Expo were the site of lavish parties, sponsored by companies happy to show off their success. Today, the merrymaking is much more modest. No one can agree on how far revenues fell since the boom years, but some estimate it might have been as much as 75 percent. Yet despite the decline, porn is more ubiquitous than ever. How to explain this?

So as I sat there, flustered, goggles in hand, Piper Blush’s question struck me as optimistic but determined. With porn’s lucrative days far in the past, the survivors were struggling to adapt to the current stakes. Could the new world MindGeek created make room for them?

But many fear that what major tube site companies aren’t given, they’re able to take. This is largely thanks to the “safe harbour” provision by the Digital Millennium Copyright Act (DMCA). The provision ensures that a content-hoster can’t be held liable if copyrighted material is uploaded onto their site. Without this protection, sites like YouTube would be constantly fending off costly lawsuits. Instead, the DMCA puts the burden on content owners to find their work and ask for it to be taken down.

Nate Glass, an anti-piracy activist and entrepreneur in Las Vegas, believes tube site companies may be exploiting this provision. “We’ve found tube sites where, within a few months of them existing, have 20,000 videos,” he says. “You know that there wasn’t a rush of people to upload videos to this site that no one had ever heard of.” Indeed, adult industry forums reveal job postings for full-time tube uploaders. Large-scale content theft is a business.

MetArt dropped the suit and no money was exchanged. (A MindGeek spokesperson says: “There is no room in our model for the assumption that content is pirated. Content providers are some of our most valuable partners.”) But even if MindGeek had agreed to remove MetArt’s content, it wouldn’t have altered a thing. By enjoying a major part of the market share, MindGeek has created an ecosystem where it’s very hard to get attention without using its services. Mike South is a pornographer and blogger who has researched MindGeek for years. He believes the company’s dominance won’t survive in the long-term. “It’s running out of stuff.” he says. “It’s destroying its host and will fade away over time.”

In the short-term, however, MindGeek is succeeding because whatever it loses in revenue, it makes up in data. Like other data giants, such Google and Facebook, it is brilliantly positioned to broker interactions between viewers, content providers, and advertisers. It takes a piece of everything that happens. It also remembers everything that happens. When users visit PornHub, videos they’ve previously watched re-appear in the form of targeted advertising: pop-unders, pop-up windows, banners. Indeed, the company’s ad network, Traffic Junky, serves billions of ad impressions to over 60 million daily visitors and tailors content for identifiable audiences who are more likely to convert to paying customers.

Tech entrepreneur Cindy Gallop blames these conditions on society’s discomfort around porn. “When you drive an industry underground,” she says, “you make it a lot easier for bad things to happen, and a lot harder for good things to happen.” To that end, Gallop launched makelovenotporn.tv, a site where “real world” people share videos of themselves that other members can rent for $5. Her mission is to drag sex out of the shadows, where its true profit potential can be unleashed. Gallop points out that Fifty Shades of Grey is one of the highest grossing books in the world. “That’s the financial power of socially shareable sex,” she says.

MindGeek appears to be betting on mainstream acceptability, while Gallop thinks the revolution in social sex will look completely different than what’s found on the tube sites. For the team at YourVRPorn and many other companies the future is virtual reality.

The penis I saw through my headset, for example, seemed to rise from between my legs. It wasn’t an unnaturally large member, and the owner was caucasian, so it was believably my own. The model was life-size and more than life-like. It was so much like being alone in a room with another living, breathing human that my mind didn’t bother to contemplate the difference. Even with the slightly fuzzy resolution of the prototype goggles, the sex act—the sucking, the kissing, the licking, the eye-contact—was intensely arousing. Did I get a hard-on? Yes.

VR won’t happen quickly. Less than one percent of computers worldwide have the necessary hardware to support the technology. Even so, Deloitte predicts that 2.5 million headsets will sell in 2016, and other industry analysts project that sales will reach 200 million units annually by 2020, when the market is predicted to be worth as much as $150 billion (US).

Mark Mann is a journalist whose work has appeared in Toronto Life, Dance Current, Report on Business, and Motherboard.
Paul Kim 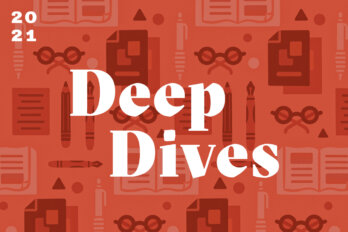