Sweeping It under the Carpet | The Walrus
Skip to content 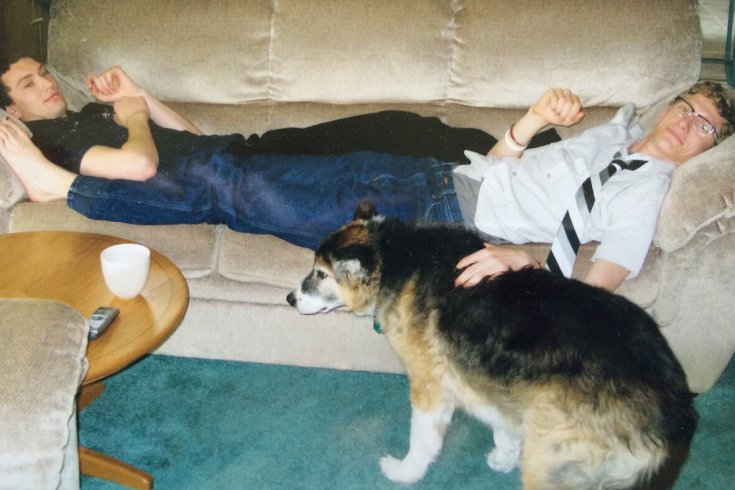 The author (right) with his brother and their dog, Buddy.

My friend Alex and I are standing in a Toronto dog park. I don’t have my shepherd-cross, Maisy, with me, having left her back in Calgary, and Alex doesn’t own a dog. He comes to watch—an activity I’d agreed to on the bus ride here but now realize has an unsettling, deviant feel.

As Alex stares at two golden retrievers wrestling in the mud, he tells me how he and his boyfriend want to get a French bulldog and name it Judy.

“Just know what you’re getting into,” I say. I rhyme off the mundane stuff: the walking, the training, the odd pride you feel in picking up your dearest’s first firm stool of the day that turns to surprising jealousy by the third. Alex nods along; he knows all this.

But then I warn him of the hair.

Our dog’s hair wove its way into the carpet with such ubiquity that the green phlegmatically faded to a shade the paint store would name Mild Infection.

I sweep three times a day. And after each time, I look into the dustpan and it seems as if a small cat had exploded. Maisy is four different shades of brown, but for some unfathomable reason the hair she sheds is exclusively white and broadcasts itself over our dark hardwood. I no longer dream about bilingualism, or financial security, or a Nobel Prize. I now only desire a floor that doesn’t offer up dust bunnies of disappointment every time I stroll to the kitchen.

You would think from my surprise at the sweeping requirements that I’d never had a dog. But during the summer of grade nine, my father was outvoted (by my mother’s swing ballot) and our family adopted a collie-cross named Buddy. Buddy was mature in both age and stateliness, and his belly’s blonde cherubic curls made it seem like he never went to bed without curlers. As my father handed over his credit card to the SPCA volunteer, he made a last ditch attempt to dissuade us, forcing my brother and me to promise that we’d vacuum twice a week.

Our house was last remodelled in the late ’80s, when there wasn’t any need to put effort or money or genuine thought into anything since the new millennium was dawning and surely we’d all be living on the moon by then. As a result, our floors were stapled with a thick, shaggy, dark-green carpet. A carpet as deep as a haiku; a carpet as forgiving as Christ and as dense as a Christian; a carpet so secretive that it never whispered a word to my father when, hardly two months into our welcoming of Buddy, my brother and I stopped vacuuming.

Our kitchen was the only room in our house that had an unfurred floor, boasting slick white linoleum. I was once tossing grapes into the air for Buddy to catch, gradually increasing in speed until a constant stream of purple globes arced through the air. One then hit his nose and rolled beneath the fridge. I fished it back with a coat hanger, and it came out looking like the electric heart of a science centre’s plasma ball.

The kitchen needed extensive sweeping, but by opening the front and back doors, and establishing a simple cross-breeze, I found out that the hair would tumbleweed across the linoleum and disappear into the living room carpet’s dark gravity.

Over the years, Buddy’s hair wove its way into the carpet with such ubiquity that the green phlegmatically faded to a shade the paint store would name Mild Infection. “Why is the carpet so much lighter by the couch?” my father asked me, pointing to where Buddy and I spent most of our weekends, cuddling and kissing and watching marathons of Law and Order: SVU.

“It must be how the light slants in from the window,” I said and looked at Buddy, who gazed his droopy eyes into mine, and I knew we were in it together. The following weekend, I used his brush to comb my own hair, and I remember staring at all the blonde between the bristles and believing that even a forensic analyst couldn’t tell us apart.

The summer we put him down promised rain but never delivered, and the days hung thick with slowness. I’d spend all day tired but at night I couldn’t sleep, until I would roll out of bed and crawl on hands and knees up the stairs from my basement bedroom and across the living room floor, curling my seventeen-year-old body by the couch and sniffing deep, the sympathetic carpet dabbing my tears.

Grief is never satisfied with simple sorrow; it needs humiliation. This was the first time in my charmed life that I knew such sad silliness—the kind that sits heavy on your chest all night before you finally give up, get up, and crawl up the stairs. And your father comes down because he forgot to take a chicken out of the freezer, and you have to pretend you’re looking for a misplaced loonie at three in the morning.

Oddly enough, it was at this point I started vacuuming again. I’d spend all day pushing the Can-Vac around the house, leaving long parallel lines in the cathartically cleaned carpet. The only place I wouldn’t vacuum was the square of lighter green by the couch.

There’s not a lot of structure to loss. It’s hard to convince someone that carrying a quarter-cup of Kirkland dog food in your breast pocket has something to do with the neon hollowness of 3 a.m. and wide awake. My mistake was in thinking that I was going through it alone—that my brother wasn’t stuffing his pillowcase with a frayed towel, that my mother wasn’t rubbing her hands with the talcum powder on the remaining poo bags, that my father wasn’t idling in his work van while bringing a bright orange ball to his nose.

Not wanting anyone to know about my piece of preserved carpet, I would take a butter knife and use its rounded edge to meticulously trace the completion of the vacuum’s lines.

I cuddled that patch of carpet until well after Buddy’s smell had left and realized I was only inhaling the other sedimentary layers of our lives: when my mother spilt a two-litre jug of homogenized milk; when my brother fell asleep after eating an entire neighbourhood’s worth of trick-or-treat candy and the fake blood oozed from his temple; or when Will Jones and I equipped ourselves with oven mitts and ski goggles to rescue an injured squirrel from the back alley, bringing the limp body into the house where it promptly released a long stream of urine into the woven ground.

This is what the interior decorators never tell you: there’ll be a moment in your life when you wish you would’ve carpeted every single surface. And perhaps the 1980s, peering into the sterile heart of a Y2K world, knew that the past was a delicate place and needed a certain amount of plushness if we ever hoped to hold onto it.

After I graduated high school and moved out, my parents bought a Roomba and the carpet is now cleaned with robotic indifference.

When I get back to Calgary, my wife is at work and I enter our apartment, empty except for the dog weaving furiously through my legs. After emailing Alex to say the flight went fine, I fetch the broom from the closet and set to work.

Maisy follows closely behind, peering over the bristles and sniffing the tiny parts of her shed self. I reach under the couch, dance the fridge from the wall, prop up the coffee table with one hand. I fill the dustpan three times before all that remains on the floor is the thin grey line that no matter how you angle the pan can never be erased.

As I finish, Maisy sits in the column of light that cathedrals through the window, gently raises her hind paw to her chin, and sends forth a quick flurry of white. The hair hangs motionless before it slowly pendulums to the hardwood. She lies down. I put away the broom, crawl across the floor, and sink my face into her neck.