The Pigeon Puzzle: How Do They Figure Out Their Impossibly Long Routes Home? | The Walrus
Skip to content

Nick Oud knows when to put his faith in a bird. As he clasps a homing pigeon between his hands, he looks for three things: curiosity, toughness, and stubbornness. A bird with these qualities is likely to go the distance. His benchmark is a remarkable hen named Lady Hearst, who won a mammoth 800-kilometre race in 2015.

The odyssey started in Hearst, Ontario, a town of about 5,000 people off the Trans-Canada Highway between Thunder Bay and Timmins. It began, as all pigeon races do, with a trailer resembling a wall of PO boxes. In it were 426 birds, ready to race the hundreds of kilometres back to their homes. For Lady Hearst, that challenge boiled down to an eleven-hour trailer ride northwest to a place she had never been before with seemingly no opportunity to get her bearings. Once released, she had to contend with the uniform terrain of rocks and trees that makes up part of the Canadian Shield.

Pigeon racing can be a brutal sport. Beyond the sheer length of the races, incidents of doping, mass deaths, and illegal gambling have detracted from what should be an exhibition of an animal’s incredible skill. While the Canadian racing scene is lower profile than its cutthroat counterparts in the UK, South Africa, and the United States, the challenge for the birds remains the same.

Nonetheless, Oud’s hen made the journey look like a cinch. She took flight from Hearst and made a beeline south to her home, just outside of Delhi, Ontario. After fourteen hours on the wing, she flew straight through the one-way door on the outside of Oud’s loft, finishing in first place. From that point on, she was Oud’s star hen.

Oud has had no shortage of practice selecting the perfect racing bird. One of his first memories after emigrating from the Netherlands to the township of Wainfleet, Ontario, was of nabbing a pigeon off of his roof and building it a loft out of the wooden crate that had carried his belongings to Canada. “We didn’t know any better,” Oud says. “We just grabbed the pigeon [and then realized] now we don’t have a loft for it.” Over time, he noticed that the pigeon would return to its crate-turned-loft no matter how far it strayed. That revelation changed his life.

While Oud, now seventy-five, knows when a bird is strong enough to make such a journey, he couldn’t say why she does it—or how. From around 2000 BCE, when it’s thought that ancient Sumerians discovered pigeons’ amazing homing abilities, to now, we still don’t quite know how these birds orient themselves in the sky. Scientists have various theories, but they have yet to fully understand the phenomenon. “It’s a mystery,” Oud says. “It’s part of what makes the sport so interesting.”

While Oud is content to live with that mystery, the stakes are much higher for bird researchers. Comprehending how these animals find their way home could help us understand more about the animal kingdom. “Animals are very similar, at least across vertebrates,” says Elizabeth Gow, a migration scientist formerly with Birds Canada. “If you find something out about one group of animals, it could be the same across other animals.”

For Charles Walcott, cracking the mystery of avian navigation has been a goal since the 1960s. Now a professor emeritus at Cornell University’s department of neurobiology and behaviour, Walcott has been fascinated by homing pigeons ever since a graduate student approached him with a problem. The pupil had developed an attachable radio transmitter to track the movements of birds, but the seagulls he had been attempting to use weren’t cooperating. They would take off with the contraption, fly to the city dump, and stay there. Walcott suggested he use homing pigeons instead of seagulls so that the student wouldn’t keep losing transmitters. So intrigued was Walcott by the student’s research project that he then took an extraordinary step. To track the pigeons while they flew in real time, Walcott learned to fly a Cessna 180.

“I have several thousand hours of flight time, all in circles following homing pigeons on their way home,” he says. “Apparently [the pattern] is quite distinct on radar, so the air traffic people would know what we were up to and give us a hard time.”

For scientists, there is no shortage of migration puzzles to be solved. “Monarch butterflies manage to fly all the way down [from Canada] to Mexico to spend the winter,” says Walcott. “Then, the next spring, they come up and they go to Texas and have a brood, and then they go farther north and have another brood. By the time they get to Canada, they’re probably three generations away from the ones that overwintered in Mexico. Suddenly, generation four turns around, and they’re able to fly back to that one little spot in Mexico.” Whales and caribou are two other species with lengthy migrations made possible by faculties still unknown to humans. “It’s a general problem to which we really don’t have a very good answer.”

Walcott’s work involves isolating the different “compasses” that pigeons and other species use to navigate. Three key types, he explains, are the earth’s magnetic field, the sun, and the stars. These seem to generally occur throughout the animal kingdom, he explains, though pigeons do not rely on stars because they sleep at night. But then there are other mechanisms. Walcott says that salmon somehow know to return to the streams where they first hatched. Scientists have confirmed that the fish can sniff their way around their birth stream once they get there, but as Walcott says, “Do you suppose you can really smell the Columbia River out in the middle of the Pacific Ocean? Yeah, I doubt it. I think there’s something else going on.”

While most migratory birds use a variety of compasses, the feats of pigeons differ from, say, the biannual migration of the yellow warbler. For one, migratory birds use flight paths to travel north and south. Each year that they make the trip, they take a similar route. Racing pigeons like Lady Hearst don’t have that luxury. They’re transported to a completely foreign environment and still somehow find their way back home.

Even with many a day spent over Ithaca, New York, monitoring the travels of homing pigeons, Walcott is stumped. “If you take a pigeon someplace where it’s never been before, the first thing it has to do is figure out what direction is home, and [how they do] that is still mysterious,” Walcott says. Italian scientists say it’s olfaction, but many German scientists believe it’s the earth’s magnetic field. “And then there’s a fellow in California, Jonathan Hagstrum, who says it’s low-frequency sound,” Walcott adds. “My suspicion is that maybe it’s all of the above.”

Gow, the bird-migration scientist, says that all of these theories hold water. “Birds can hear much differently than we can: they hear much higher frequencies and much lower frequencies,” she says. “The sounds emitted by the earth have very low frequencies, so the theory is that pigeons are able to detect those low-frequency sounds.”

A long-held view was that birds were aided in their orientation by a cluster of iron neurons in their beaks, which interacted with the earth’s magnetic field. “But, in the past ten years, people have begun to ask if maybe it’s something else.” Gow posits that this something could well be olfaction. “If you have a colony of birds,” she says, “they can find their individual nest among thousands by smell.”

We may consider them flying rats, but pigeons are smarter than many think. “A lot of these birds have developed a very large hippocampus, which is the part of the brain associated with memory and learning,” Gow says. Although racing birds are bred to enhance their homing capabilities, Gow believes that even common street pigeons can find their way home. “If you were to take a pigeon off the streets of Toronto and take it 500 kilometres away, it could probably find its way back.”

As the sun breaks over the horizon, casting its rays on the fields and forests of rural southern Ontario, Oud unloads four wooden cages packed with pigeons from the back of his silver hatchback. He has selected birds he believes have strong homing qualities and driven them two kilometres from home for their first test flight. He extends their range farther and farther until he feels that they’re adequately prepared to race. “I can tell when they’re ready,” Oud says. “All of a sudden, one day I let ’em out of the basket, and instead of spending time circling and trying to figure out which way, boom, they’re gone.”

As for Lady Hearst, she moved to the breeding loft after her win in 2015. Since then, Oud estimates that she has bred two or three more race winners. She doesn’t lay anymore, but Oud makes sure she remains comfortable.

When Oud walked out of his front door in Wainfleet in the early ’60s, he let his pigeon out knowing it would return but not knowing why. At a time when we think we have it all figured out, it can be humbling to be so vexed by a quandary surrounding a bird that has been tamed, used, and studied by humans for at least 3,000 years. Reflecting back on six decades in the sport and why that first resident of his makeshift loft always returned home, Oud takes a less scientific approach. “It was just understood.”

Trevor Popoff is a journalist based in Toronto.
Kathleen Fu

Kathleen Fu is an architecture student and illustrator. Her work has appeared in the Globe and Mail and Monitor Magazine. 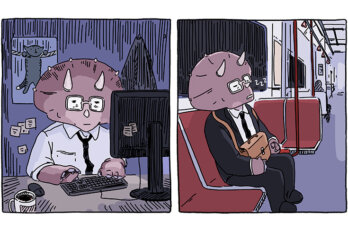 Ask a DNA Expert: What Would It Take to Bring Back the Dinosaurs? 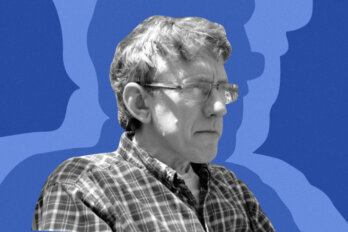 I’ve Had a Good Life. I’ve Been Water-Skiing