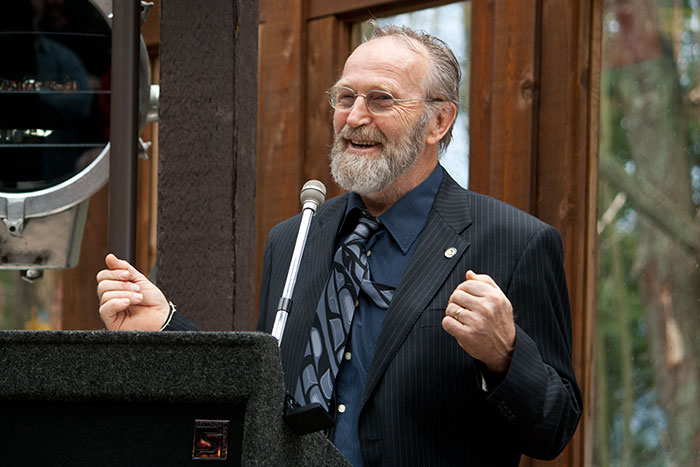 Dirk Brinkman gives a speech to commemorate his company's billionth tree in 2010.

Dirk Brinkman has been selling trees since 1970, before carbon had anything to do with it. Had you met him when he founded his eponymous tree planting company, the one every student who ever spent a summer plugging saplings into the bush has heard of, you would have beheld the picture of an environmental activist: all beard and no shirt, spade raised against the logging machines that made a checkerboard of Western Canada’s forests. Today Brinkman is quick to point out he is not that kind of activist; he is a “serial environmental entrepreneur” who sees climate change as the business opportunity of a lifetime.

That’s because carbon now has something to do with everything, especially forests, which sequester almost 90 percent of the world’s above-ground supply. Conversely, logging and incinerating this global carbon sink is responsible for a fifth of humanity’s contribution to greenhouse gases, more than any other activity except electricity production. We could decommission every car, truck, airplane, and ocean liner on the planet, and it wouldn’t do as much to curb global warming as keeping our forests intact would.

How to turn on, tune in, drop out—and get rich 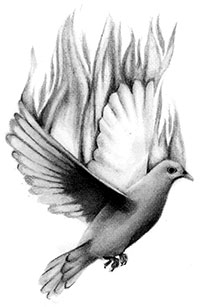 One of the original hippie entrepreneurs was Michael Lang, organizer of the Woodstock music festival. A former head shop owner, he wore a buckskin vest when he met with investors, and maintained a cool facade that didn’t flag, even when the crowd became unwieldy. Those “three days of peace and music” became legendary, allowing Lang to cash in on nostalgia marketing. A twenty-fifth anniversary concert, Woodstock ’94 (crassly billed as “two more days of peace and music”) was sponsored by Pepsi and Apple, and its success spawned a thirtieth anniversary show five years later. But Woodstock ’99—memorable for performances by rap metal stars Limp Bizkit, Korn, and the Insane Clown Posse, as well as sweltering heat and overpriced concessions—devolved into fire, looting, and an alleged gang rape. Lang remained mellow, telling the Washington Post that the crowd’s antics were not “an anti-Woodstock statement, [but] an anti-establishment one.” This was a new establishment, however. “I blame Michael Lang,” attendee Don Waslelewski told the National Review. “He totally overpriced everything. He forgot what Woodstock is all about.”

So Brinkman, now sixty-six, has traded his khakis for pinstripe suits and has trimmed the savage beard of his planting days down to a silver lining. He has mastered the slick PowerPoint presentation and the felicitous hallway encounter, and he likes to pin audiences with stats-laden monologues that rarely end on cue. Yet his message is simple enough: “It’s too late to avoid catastrophic climate consequences by reducing energy emissions, but it isn’t too late to avoid catastrophic climate consequences altogether. We’ve just got to mount an equal initiative to increase removals.”

Of course, that’s a convenient conclusion when you’re the one selling the removals. Brinkman & Associates Reforestation Ltd. is probably the largest tree planting and conservation company in the Americas. Its operations have expanded well beyond its West Coast headquarters to include projects as far afield as Nepal and Chile, plus $100 million worth of reclaimed teak, mahogany, and native hardwoods from Central America. Last summer, it celebrated the planting of its one billionth tree. But for several years, Brinkman has spent at least a third of his time trying to convince everyone from the European Union’s climate commission to the United Nations Framework Convention on Climate Change that he’s not just sustaining forests; he’s also sequestering carbon.

This, Brinkman feels, has a monetary value all its own, and the place to have that value assessed and traded would naturally be a carbon market. Several of these exist around the world, such as the Clean Development Mechanism, established by the Kyoto Protocol; the Chicago Climate Exchange; and Alberta’s provincial market, where polluters can absolve their carbon sins for $15 a tonne. But purchasing carbon offsets, typically from alternative energy and energy reduction projects, is an entirely voluntary act almost everywhere but in the European Union, which is why the EU’s carbon market is the only truly effective one. Last year, it traded at close to $100 billion, well over half the global share.

Initially, however, the regulatory body for the EU’s carbon market failed to recognize forestry projects such as Brinkman’s in the developing world, so in 2004 he joined a delegation that was lobbying for change. Environmental activists took a firm stand against it. They said, Brinkman paraphrases, “We don’t want reforestation to provide an excuse for a German coal-powered plant to keep using coal.” That remains a powerful argument against carbon markets in general, which are essentially designed to fight capitalism with capitalism, and Brinkman has honed his response. “I’m sympathetic to the notion that you can’t trade forest carbon against industrial carbon,” he says. “But I see it as a portal to a natural economics. We’ve got to walk our way to a point where industry deals with its own problem.” He’s hopeful that by 2012 the EU will agree.

Meanwhile, he’s also been busy on other fronts. Participating in five of the past six international climate change negotiations under various guises—from representative for the Sierra Club in 2006 (when Elizabeth May, a frequent collaborator, was president) to technical adviser for Papua New Guinea at the 2010 meeting in CancÃºn—he has become a prolific advocate for Reducing Emissions from Deforestation and Forest Degradation in Developing Countries (REDD). The UN proposal calls for industrialized nations to establish a fund that would pay developing countries to not log their forests, and it has weathered about as much criticism as its free market alternative has. How do you prevent a government from cutting down a teak forest twenty years after someone like Brinkman has been contracted to draft a land management strategy and plant trees? Or ensure that a government doesn’t simply let someone else log a different patch of forest? And if it had already planned on conserving its trees, why should REDD pay it anything extra?

These are the wrinkles Brinkman and his fellow REDD negotiators have been struggling to iron out over the past decade, and last December they achieved one of the few concrete results to come out of CancÃºn: an agreement in principle on what is now known as REDD+, which rewards countries for reforestation initiatives, to which developed nations have so far committed over $10 billion. When the protocol is finalized at this December’s summit in Durban, South Africa, billions more dollars are sure to follow, with so-called carbon cowboys right behind them.

But Brinkman resists the unflattering characterization. For him, earning a profit doesn’t represent a conflict of interest; rather, it is precisely the point. “You can’t apologize for the fact that what you’re advocating is congruent with your self-interest if it is truly in the public good,” he says, then pulls another statistic from his arsenal: at least a billion hectares remain to be planted worldwide, more than Brinkman & Associates could ever achieve on its own. If you ask him, “We should all be doing this.”