The Meaning of Leaf | The Walrus
Skip to content 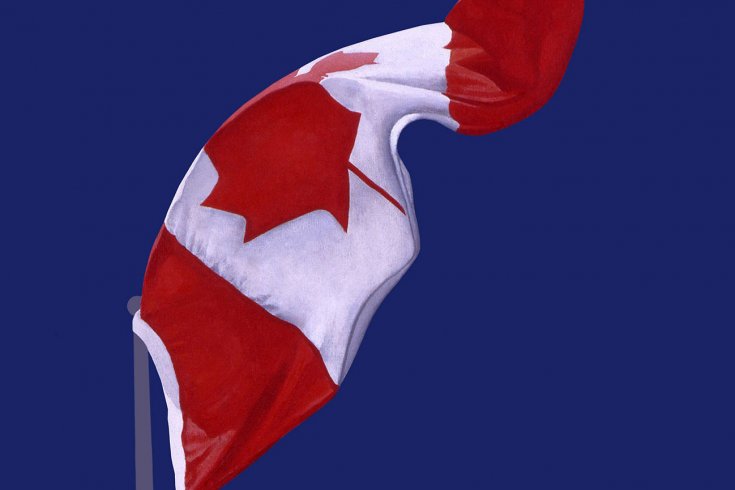 The Painted Flag by Charles Pachter

When my aunt and uncle from Hong Kong came to visit Canada for the first time in the 1980s, they told me they wanted a souvenir. Specifically, they wanted a real maple leaf—one as red as the Canadian flag. Because I was used to seeing them everywhere, I didn’t really understand the appeal. But I was a kid and was more than happy to go on a leaf-picking adventure. The leaf we found was more orange than red, but it was good enough. We gingerly picked it off the ground and placed it inside a book for safekeeping, where my aunt tells me it remains today, on a shelf in their Hong Kong apartment.

About twenty years later, their children also came to Toronto for a visit. Like their parents, my cousins also wanted a memento—something distinctly Canadian. What they wanted, however, wasn’t a piece of Canadian flora. They were looking for an oversized hoodie from Roots, one that would feature, ideally, an image of a beaver . . . or a maple leaf.

As we approach the half-century anniversary of the national flag’s February 15, 1965 inauguration, I ask that we give a moment’s thought to what the flag means to us today. Although the red maple leaf is now seen as quintessentially Canadian, emblazoning the square white pale at the middle of our national flag, its prominent position on our ensign was in fact a subject of vigorous debate back in 1964, when Prime Minister Lester B. Pearson first declared that the government would adopt a “distinct flag of Canada.”

Between the 1890s and the 1960s, almost all of Canada’s unofficial flags placed the maple leaf in a secondary position, while the Union Flag claimed the position of honour, on the canton at the top left corner of the ensign. The eradication of the Union Jack from our official flag in 1965 thus was interpreted as a proud proclamation of Canada’s sovereignty and distinction. No longer would our national identity be secondary to our British past.

Where does the maple leaf stand today? It’s in our schools and on Parliament Hill, but it also has migrated onto corporate logos and brands—something that Pearson might not have expected fifty years ago. McDonald’s Canada, for instance, features the maple leaf on its familiar golden arches. In the case of the Canadian logo for Wendy’s restaurants, the maple leaf is used as an apostrophe. It sits on top of Canadian Tire’s red triangle, at the centre of Air Canada’s red circle, and at the end of VIA Rail’s stylized yellow letters. Like so much else in our society, the maple leaf has gone corporate.

It would be a shame if the maple leaf’s superficial brand appeal took away from its greater symbolism. For immigrants, especially, the maple leaf is more than just an identifier of where to eat or buy hardware: it’s an eleven-pointed marker of Canadian values.

My father immigrated to Canada from Hong Kong in the 1970s in order to escape the then-impoverished state of his childhood home. My mother fled the Vietnam War as a refugee around the same time. They met while taking a remedial English class and married a year later. After a short stint in London, Ontario, where my sister and I were born, my parents flew to British Columbia, where they opened the first Chinese restaurant in Stewart. It was a town of a few hundred people, all of whom embraced us as part of the community. My parents eventually returned to Ontario a couple of years later, so that my sister and I could live in a big Canadian city, where we would have educational opportunities they never had. Opportunity. Acceptance. Freedom. That’s what the maple leaf has meant to my family.

This Sunday, remind yourself that what the maple leaf truly stands for cannot be sold over the counter, or consumed with a bun. Our flag badge is not an apostrophe so much as an exclamation mark.