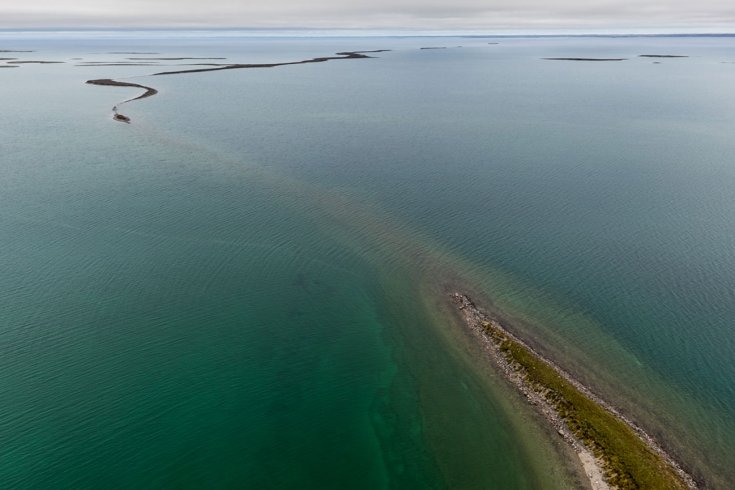 The world’s biggest lake on an island, at 5,542 square kilometres, lies in the southern half of Baffin Island, Nunavut. Its name, Nettilling, is based on the Inuktitut word for a rare subspecies of ringed seal that lives in the fresh water.

On the lake’s western shores, mirages of giant cliffs are phenomena so dependable that fishermen use them for navigation. In the east, the lake is flecked with granite islands surrounded by water laden with silt from the Penny Ice Cap. The meeting of the teal glacial water and the deep blue flow from the Amadjuak River in the south is an Arctic take on the Rio Negro colliding with the Amazon. The two waters run for kilometres side by side, maintaining their identities.

In them live Arctic char. In 1976, an estimated 126,000 char made the migration from Foxe Basin upriver into Nettilling Lake. The run in the Koukdjouak River is particularly abundant. But Nettilling is remote, and the char are still 350 kilometres away from Iqaluit when they’re hauled from the water; the economics of transporting fish this far north are dismal. It’s nearly five times more expensive to fly cargo from Nettilling Lake to Iqaluit than from Ottawa to Iqaluit. Fly-in and fly-out test fisheries have been attempted four times since the mid-1960s, with little success.

In the early 1960s, the commercial fishery was putting the finishing touches on its overexploitation of the char in the Sylvia Grinnell River. The population has never fully recovered, and Iqaluit—like the rest of Nunavut—is experiencing a crisis of food insecurity. Despite its name meaning “place of many fish,” Iqaluit has long been a community with not quite enough fish.

A winter fishery of the Nettilling Lake char using snowmobiles is more viable, but there’s no record of where the fish go, or even evidence that they go anywhere in particular, once they enter the lake. In the summer of 2013, explorers Eric and Sarah McNair-Landry embarked on a 1,032-kilometre expedition across Baffin Island in Inuit-style sea kayaks they had spent two months crafting. After following the eastern shore of Nettilling Lake for eight days, Expedition Q found an abundant source of Arctic char in the churning eddies of the Amadjuak River. The fish were migrating south toward Amadjuak Lake, the second-largest lake on Baffin Island and 150 kilometres closer to Iqaluit.

Last August, the expedition returned to navigate the Amadjuak River by raft, with support from the Nunavut government’s fisheries and sealing division, the Ocean Tracking Network, and the federal department of fisheries and oceans. They caught and tagged forty-two char in order to track the southern extent of the fall migration and the timing of the spring migration beneath the ice. Next year, the team will return to check the receivers and map the data—and hopefully reveal a gathering of char along the southern shores of Amadjuak Lake large enough that the fish could be caught with nets in the winter and offer a new source of food to Baffin Island.