The Lesson from Rolling Stone: Everybody Lies | The Walrus
Skip to content 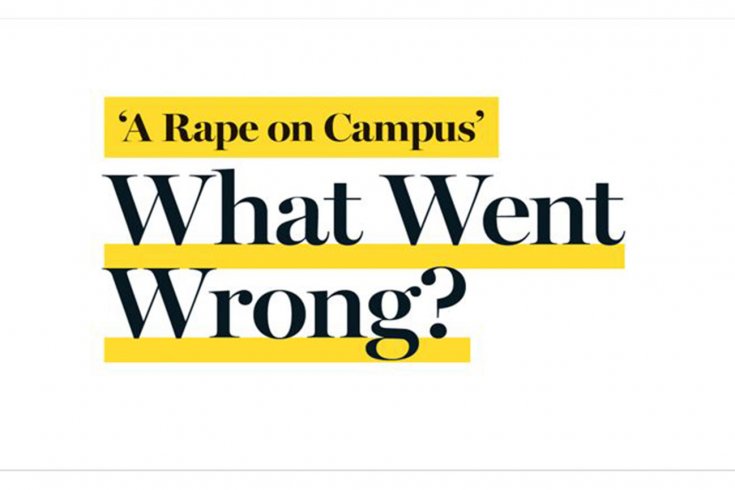 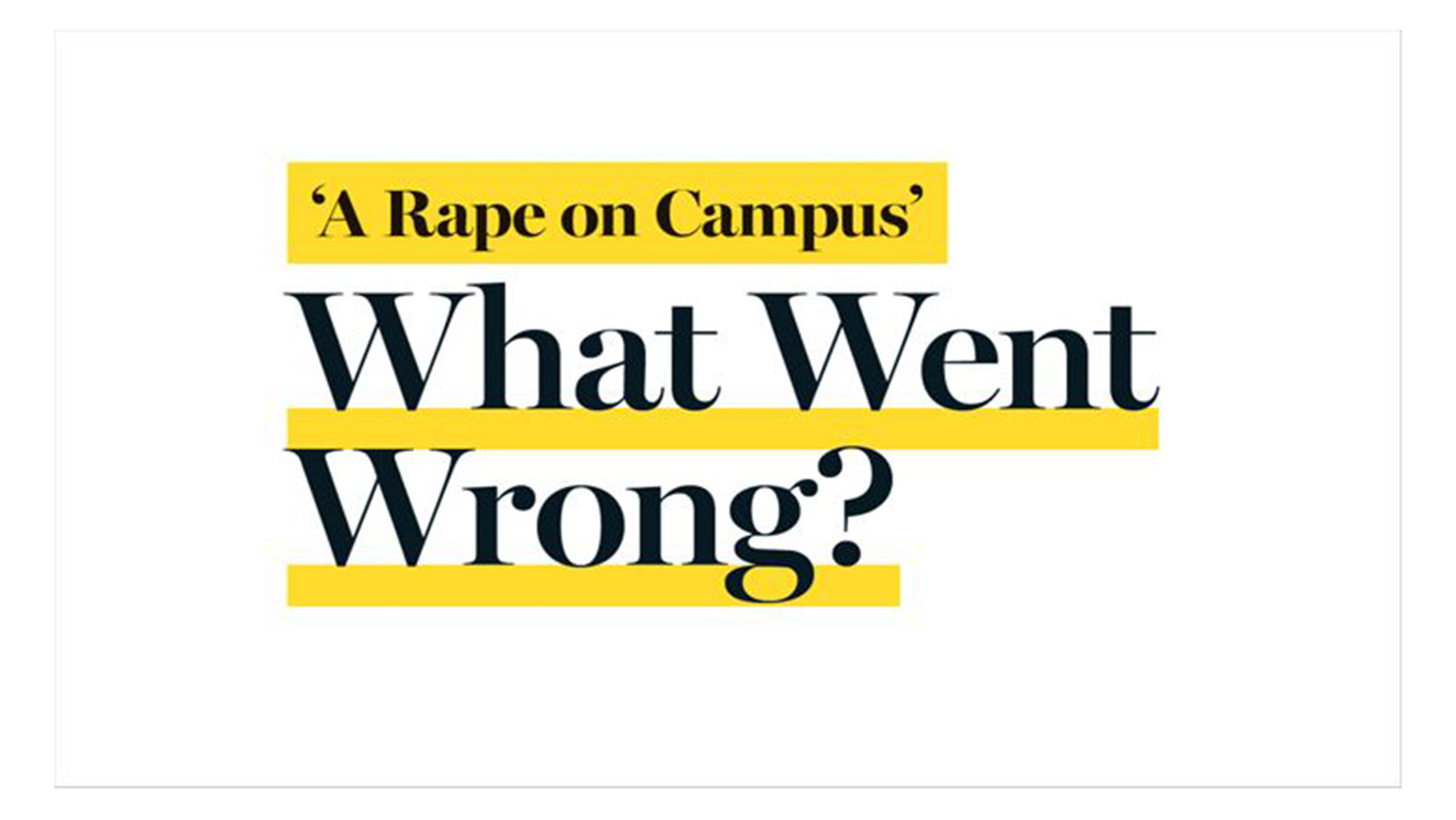 On Sunday, a team of three Columbia University academics delivered their report into Rolling Stone magazine’s infamous November 2014 article, “A Rape on Campus.” That article (archived here) centred on a horrifying sexual assault, in which a University of Virginia student identified as “Jackie” claimed to have been gang-raped in a frat house after falling through a glass coffee table and getting punched in the face.

The piece went viral, attracting 2.7 million hits. Not only was the story itself horrifying, it also tapped into a rising tide of concern about rape on North American campuses. Jackie wasn’t just a sexual-assault victim. She also was a symbol of the thousands of anonymous college women who suffer in silence because callous college administrators doubt their stories.

But now the woman who reported “A Rape on Campus” has become a symbol of something entirely different: scandalous journalistic incompetence. As we learned in late 2014, reporter Sabrina Rubin Erdely relied almost entirely on a narrative provided by Jackie; she never interviewed, or even made sustained attempts to interview, the rapists who allegedly attacked Jackie. Follow-up reporting from the Washington Post and others could find no traces of the party where the alleged rape took place. A four-month investigation by the Charlottesville, Virginia, police department concluded: “There is no substantive basis to support the account alleged in the Rolling Stone article.”

All of these details are laid out in the Columbia report, which is nearly 13,000 words long, as are some of the broader sociological ramifications. “Erdely and her editors had hoped their investigation would sound an alarm about campus sexual assault and would challenge Virginia and other universities to do better,” the authors conclude. “Instead, the magazine’s failure may have spread the idea that many women invent rape allegations.”

The report’s authors make clear that there was no one single error in judgment that led to this scandal. It was the result of multiple bad decisions by Erdely and her Rolling Stone editors. But one amazing detail does stand out from the rest: no one at Rolling Stone ever verified that the alleged gang-rape mastermind, identified by the pseudonym “Drew,” even exists as a real human being.

To her partial credit, Erdely admitted, in one draft of the story, that Jackie “refuses to divulge [Drew’s] full name . . . [because she is] gripped by fears she can barely articulate.” And yet even that was cut by her editor, Sean Woods. At one point, Rolling Stone editors authorized Erdely to ease Jackie’s fears by offering to use a pseudonym as an alternative to tracking Drew down. That is stunning.

But the really interesting issue isn’t the nuts and bolts of how this scandal happened. It’s why it happened. And on this score, the most telling quote in the Columbia report comes from Rolling Stone fact-checking chief Coco McPherson, who told the report authors: “I one hundred percent do not think that the policies that we have in place failed. I think decisions were made around those because of the subject matter”—which is to say, rape.

Or as Rolling Stone managing editor Will Dana told NPR this week: “We decided that it was important to believe a woman who said she was a survivor of a sexual assault—and to not question it, and to not feel like she was being kind of retried in public by journalists.”

That quote captures, in a sentence, the paradox that surrounds our understanding of rape in our progressive age. On one hand, rape is (correctly) held up as an extremely serious crime of violence, one whose eradication must be a central aim of policy-makers, prosecutors, police, and college administrators. On the other hand, we are increasingly reluctant to subject rape allegations to the level of scrutiny and due process that we (correctly) insist on applying to every other serious crime.

There is no stigma against journalists closely scrutinizing the narratives provided by alleged victims of kidnapping, arson, torture, and even terrorism. (Certainly, it is absolutely impossible to imagine Rolling Stone producing a story titled, say, “An Attempted Murder on Campus” in which the reporter made no serious attempt to interview the alleged murderer or any of the witnesses.) What the Columbia report shows is that, for some journalists, the testimonials of alleged rape victims now are regarded as the secular equivalent of a sacred text. This anti-rationalist mindset, more than anything else, is what disturbs me most about what happened last year at Rolling Stone.

Undergirding good investigative journalism is the idea that sacred texts do not exist. Politicians lie. Scientists lie. Priests lie. Criminals lie. And, yes, victims lie. Jackie, in particular, had liar written all over her. Not because her rape story was dramatic, but because she was massively evasive whenever Rolling Stone requested contact information that would have helped verify her account. In any other context except a rape accusation, this is a source who would have been written out of the story long before any fact-checker picked up a phone.

At the root of this scandal is the notion—which has been percolating through progressive Twitter circles for years now—that there is something morally heroic about uncritically believing the testimonials of self-identified rape survivors. This basic impulse is humane and understandable: we know that most real rape survivors do not report their traumas, and so the act of uncritically acknowledging those women who do come forward feels morally justified on some gut level. Erdely’s basic mistake is that she let this moral urge contaminate her investigative reporting.

Consider this passage from Erdely’s article, in which she purports to describe the reaction of Jackie’s three friends after the alleged rape:

The group looked at each other in a panic. They all knew about Jackie’s date that evening at Phi Kappa Psi, the house looming behind them. “We have got to get her to the hospital,” Randall declared. The other two friends, however, weren’t convinced. “Is that such a good idea? ” countered Cindy. . . . “Her reputation will be shot for the next four years.” Andrew seconded the opinion. . . . The three friends launched into a heated discussion about the social price of reporting Jackie’s rape, while Jackie stood behind them, mute in her bloody dress.

It’s doubtful whether this scene ever took place. (Rolling Stone seems to have reported it entirely based on the claims of Jackie herself.) Nevertheless, it’s telling the way Erdely exploits it as an implicit role-playing exercise, essentially inviting us into a circle of post-rape first-responders. We like to imagine that, if this horrible moment should come, we would be a Randall, believing the victim and urging action—not some unfeeling, cynical Cindy.

And that final grace note—“Jackie stood behind them, mute in her bloody dress”—is just a too-perfect symbol of the larger theme Erdely had hoped to communicate. In this manufactured narrative, Jackie becomes a proxy for a larger community of rape survivors, standing in silent judgment of those who evince scepticism. Real life is rarely this cinematic.

All great investigative reporters have an activist streak. It’s what motivates them to pursue and pitch hard, complex stories. Great journalism can be a grind—months spent sifting through documents and tracking down sources, with only an uncertain hope that the story will pay off journalistically or financially. Without the belief that your story will make the world a better place, it’s impossible to sustain the level of effort necessary to get an ambitious investigative project off the ground.

But great reporters also know that, once their investigations are actually underway, there comes a stage when they need to make a clean break from activist instincts, and adopt the role of dispassionate fact-finder. Erdely never made that transition, in large part because the mantra of “believe the victim” has destroyed the firewall between fact-finding and advocacy. The Columbia University Graduate School of Journalism report into Rolling Stone’s errors provides a sound basis for building it back up again.