The Intolerable Immodesty of Justin Trudeau | The Walrus
Skip to content 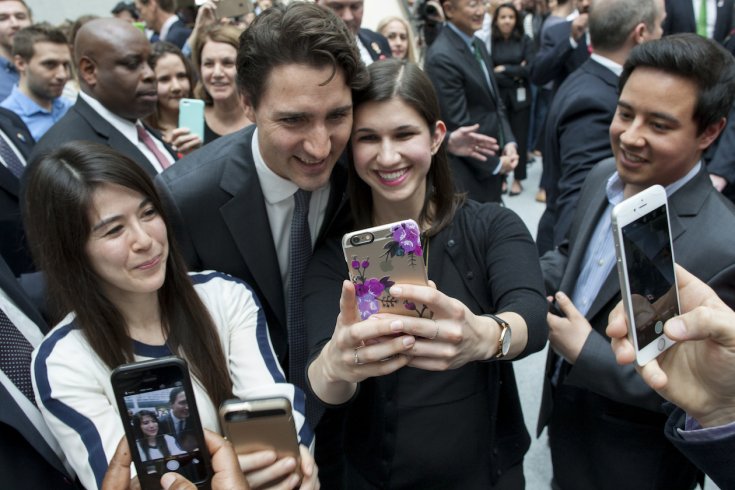 There are few things more shameless than grading yourself on a curve. And yet the Trudeau government has done exactly that.

The Mandate Letter Tracker is the government’s answer to a question nobody asked. An attempt from Ottawa to judge itself by its own rubric, fake news be damned. Under this scoring system, set up by government bureaucrats midway through the Liberal’s mandate and amid steady drone of criticism that he has failed to reach his lofty ambitions, Justin Trudeau looks pretty hot.

Of the 364 commitments laid out in mandate letters, documents prepared as marching orders by the prime minister for his cabinet ministers in 2015, sixty-six are ranked “completed—fully met,” while another one is “completed—modified.” Two hundred and eighteen promises are “underway—on track,” and thirteen are “underway—with challenges.” Another twenty-one are “on-going commitments” and—in a wonderful euphemism so perfect for his government—Trudeau ranks three as “not being pursued.” As though they are a new sort of blimp technology and not commitments made by our prime-minister-to-be.

This sort of effort may seem like just altruistic labour by the federal government to help us wretches in the press gallery hold the government to account. But despite relishing its supposed love for accountability and transparency, the Trudeau government’s new status bar for its own work is wildly out of whack with findings from the independent, non-partisan ranking system set up by two Calgary software developers and managed by you, the people.

Set up immediately after his election victory, the TrudeauMeter measures progress on the Liberals’ campaign commitments. It paints a gloomier picture: fifty-nine promises have not been started, seventy-two are in progress, fifty-nine have been achieved, and thirty-six are outright broken. (The independent reviewer counts roughly 100 fewer promises, as it uses the Liberals’ campaign platform as the benchmark, not the mandate letters laying out those commitments that were issued after the Liberals won power.)

So where, exactly, is the Trudeau government finding reasons for its self-praise?

Many of the completed promises listed by the mandate tracker are, in fact, cause for kudos: the government cut taxes for the middle class, completed a thorough review of the Canadian military’s operational needs, passed prohibitions on discrimination against transgender people, and brought in tens of thousands of Syrian refugees (albeit two months behind schedule, hence the “completed—modified” designation). But the LSATs are not marked on the honour system, and for good reason.

The Mandate Letter Tracker contains numerous half-truths and fudged details. In their platform, and in the mandate letters issued by the prime minister, the Liberals promised to phase-out subsidies for the fossil fuel industry in the “medium term.” Since taking government, they’ve extended one tax credit for oil and gas companies until 2025, and, more recently, have phased out one very specific tax credit that allows companies to shift expenses to maximize their tax break. That’s about it. The TrudeauMeter classifies this as a broken promise, but the mandate tracker calls it “underway—on track.” This, even though Trudeau’s own Natural Resources Minister Jim Carr said that it’s “not the time” to be pulling federal funding for oil and gas. Amid all this, the Auditor General had to get into a public fight with the finance minister just to get documentation on their progress on this front. Not really “on track.”

The subsidies promise is complicated, though. Let’s look at a simpler one: Trudeau tasked his finance minister with balancing the budget by the 2019/2020 fiscal year. That’s one of those “underway—with challenges” promises. The TrudeauMeter, more accurately, notes this promise is “broken.” Why? Because the government has already spent too much money. To suggest the promise is “underway” puts a pretty tough strain on the truth.

Another supposedly fulfilled promise is the (uproarious to me) idea that the Liberal government has succeed in reforming question period “so that all ministers, including the Prime Minister, are held to greater account.” Anyone who has been in the fallout radius around the daily exchange of barbs and talking points can tell you that reformed it is not.

How about plans to modernize the Access to Information Act? The Mandate Letter Tracker brags that this commitment is “underway—on track,” as the government is apparently following through on its plan to expand the system to ministers’ offices and is beefing up the Information Commissioner’s power to ferret out stubborn information from the annals of power. Hop over to the TrudeauMeter and you’ll see that this pledge is, in fact, broken. Unlike what’s advertised in the supposed scorecard of the government’s promises, the legislative changes do not allow Canadians to request documents from ministers’ offices. In insisting that the government followed through on its commitment, Trudeau is lying.

Nathan Cullen, the NDP’s ethics critic, took particular umbrage to that. “If my kids came home with their report cards with grades that they themselves filled out, I’d still want to go talk to their teacher,” he told The Walrus. On access to information specifically, he says: “they keep smiling and saying they’re open to Canadians, and yet they refuse to be.” The indication, thus far, is that the government will kill any amendments to that legislation at committee. (“Strengthen Parliamentary committees so that they can better scrutinize legislation” is marked as “completed—fully met,” by the way.)

The Conservative Party didn’t respond to an interview request.

Doing a back-of-the-napkin count would show that about a half dozen of the supposedly “fully met” promises are either not truly completed or fall below a laughably low bar so as to be called an achievement (“prepare for the North American Leaders Summit in Canada,” for one).

Of those flagged as coming “with challenges,” there appears to be little differentiating them from simple failures or, in some cases, outright boondoggles. Take the replacement plan for replacing Canada’s aging CF-18 jets, beset by more flip-flops than a pool party, which is still without any plan beyond hoping the fighter jets don’t fall from the sky again. The “challenge” here is that the government initially promised to kill the F-35 procurement plan for good, only to waffle on that, with a plan to reboot the procurement process. That now appears stalled, as the government announced plans to procure new, interim, CF-18s from the Americans only to turn around and kill that in a trade spat with the Trump administration. As of now, the tentative plan is to purchase some planes from Australia, as a long-term solution remains unclear.

In the graveyard of promises “not being pursued” is electoral reform, complete with the government’s favourite talking point: reform had to die, as “no clear preference for a new electoral system had emerged.” (Consensus was never a precondition set by the government, which consistently fought not to hold a referendum on the matter, calling it too divisive.)

Then there’s the things that are mysteriously missing altogether. While other aspects of public services and procurement minister Carla Qualtrough’s mandate letter are in the Mandate Letter Tracker, conspicuously lacking is mention of the Phoenix pay-system debacle, which has shafted scores of public servants and contractors out of their pay and has run up a bill for the federal government extending into the hundreds of millions of dollars. Setting up the system may have been the previous government’s idea, but fixing it is certainly this government’s job.

There is nothing wrong with an administration getting its positive message out. We, as a society, even seem comfortable with a relatively large amount of truth smoothing and airbrushing on some of the rougher edges of government. But this tracker might be too much makeup. If the government decides to put forward its own, alternative, facts to try and go toe to toe with the media and its watchdogs, we end up in a fight over the very basis of reality. What is broken, what isn’t. What is reform, what isn’t. By boiling this down to a cute digital app, the government is making that back and forth all the more acute and problematic.

I asked Cullen: Is there any way for Ottawa to do this in a credible way? “No,” he said. “You need a third party.”

The Trudeau government has spent an awful lot of time trying to short-circuit the fake news media to try and spread the good word. If I had to rank his progress on that front, I’d put it at: underway—with challenges.

An earlier version of this story reported that the Liberals’ had limited the power of the Parliamentary Budget Officer. In fact, MPs at committee fixed up that legislation to address concerns.