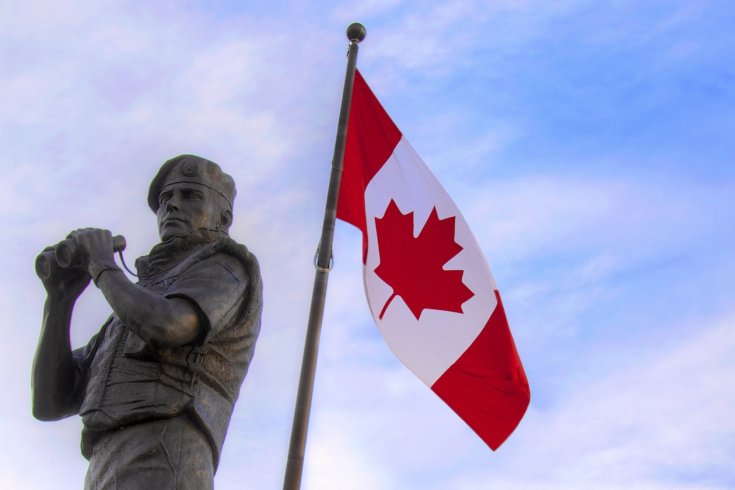 In late summer 2016, Liberal MPs emerged from their first summer caucus retreat in Saguenay, Quebec, with a proclamation. After years of shrinking participation in UN peacekeeping, Canada announced it will retake the international stage with a commitment of nearly half a billion dollars and as many as 600 Canadian troops to a yet-to-be-determined mission.

The 2015 election and Prime Minister Justin Trudeau’s early months in power were a heady time. While on the campaign trail, Trudeau returned again and again to Canada’s self-image, asking us to imagine our future role on the world stage in the best possible light. Harkening back to an idealized past when Canada was a symbol of all that was right in the world, he exhorted Canadians to help him reclaim our place as human rights defenders. And many of us bought into it.

It’s now late 2017, and after over a year of deliberation, Trudeau’s peacekeeping promise has morphed into something very different. He now envisions fulfilling it through a combination of equipment, a 200-person “rapid response force” for temporary deployments only, transport vehicles, and $21 million that will go towards bringing more women into senior peacekeeping roles. Despite the noble effort to strike a more gender-equal balance in peacekeeping, it’s a glaring downgrade from the initial commitment. Most notably, this new plan leaves out any guarantee of Canadian boots on the ground for specific UN missions.

It’s easy to forget we were once a peacekeeping behemoth. It was foreign affairs (then external affairs) minister Lester B. Pearson who proposed the first large-scale deployment of peacekeepers to Egypt during the Suez Crisis in 1956. The United Nations Emergency Force, initially led by a Canadian general, helped keep the peace between Egypt and Israel until the Six Day War in 1967. Pearson was awarded the Nobel Peace Prize for his efforts, and Canada remained a mainstay of UN peacekeeping for decades, contributing 125,000 troops and police officers to missions in more than thirty-five countries.

Of course, it came at a cost. Over the decades, about 130 Canadians died in peacekeeping operations, including on the biggest single day of loss of life for the Canadian military since the Korean War. Still, we stayed the course into the 1990s—until two high-profile setbacks sapped our enthusiasm. First, Canadian soldiers participating in the 1993 UN mission in Somalia tortured and beat a Somali teen to death, resulting in the disbanding of the Canadian Airborne Regiment. Then, the following year, a UN peacekeeping mission under the command of General Roméo Dallaire failed to stop a genocide in Rwanda that resulted in 800,000 deaths.

In the years after 9/11, Canada’s military’s role in the war in Afghanistan shifted the country’s focus further from peacekeeping. By the time Justin Trudeau and Stephen Harper clashed over whether or not Canada was truly still a peacekeeping country, during the 2015 election campaign, only sixty-eight Canadian peacekeepers were still in the field. By comparison, countries such as Ethiopia, Rwanda, India, Pakistan, and Bangladesh all currently contribute over 6,000 peacekeepers each to UN missions.

The picture painted by these numbers clashes with how Canadians think of themselves, with a poll late last year suggesting that 70 percent of the country supports deploying Canadian troops to active conflict zones. But Trudeau has balked at committing Canadian service members to specific missions where peacekeeper deaths are common. In Mali, where the Liberals initially mulled a contribution, 146 peacekeepers have been killed in the last five years. In a post–Afghanistan war Canada, political will to put lives at risk is in very short supply

Peacekeeping has always been hard, dangerous work. And it’s no secret that the world peacekeepers work in has changed dramatically and become even more deadly since Canada was a big player. Traditional peace monitoring missions are the exception now, and peacekeepers are increasingly deployed in active conflict zones.

No country wants its soldiers to die, but most countries also don’t give lip service to peacekeeping, reap the political rewards, and then let other (usually poorer) countries be the ones to put their men and women in uniform on the line. The UN needs people to keep and make the peace. In shirking that role, Canada has pulled a bait and switch on the world.

The damage to Canada’s peacekeeping brand comes not only from the country’s paucity of peacekeepers but also from a booming national arms industry. This is best illustrated by our $15 billion sale of armoured vehicles to Saudi Arabia, a country often denounced as having one of the worst human rights records in the world. One variety of those vehicles, called Gurkha RPVs, can be outfitted with gun turrets and remote weapons systems and are reported to have been used against Saudi citizens to crush dissent inside the country. When news of that broke last summer, foreign affairs minister Chrystia Freeland ordered an investigation to determine if the vehicles were indeed made and exported by Canada. But questions about the deal were raised much earlier. When the Liberals first took office, then-Foreign Affairs Minister Stéphane Dion took heat for the deal because of human rights concerns, but claimed it couldn’t be stopped, saying it was signed and sealed by the previous Conservative government. That was shown to be false when official documents revealed Dion ultimately signed off on the deal himself. Nevertheless, Trudeau stayed firm on the deal through the ensuing controversy, saying, in the House of Commons in May 2016, that Canada must “stick to its word.” Canada now seems more afraid of losing its reputation as an honest business partner than of sullying its reputation on human rights.

Government lawyers have also admitted that Canadian weapons could potentially be used in Yemen, where Saudi Arabia is engaged in a brutal war in which at least 5,000 Yemeni civilians have been killed. The Liberals have since put forward legislation they’ve said would “enhance transparency” on weapons exports. Recently, however, a former human rights advisor to Stéphane Dion denounced the move in the opinion pages of the Globe and Mail, pointing to a major hole: the legislation won’t require public reporting of arms exports to the US, the country that accounts for more than half of our military exports.

Weapons sold to the US are also reportedly resold to governments with patchy human rights records. And because the bill won’t force the government to disclose US weapons sales, Canadians won’t know the kind and quantity of military equipment that is later resold to countries such as Nigeria. In that country in particular, Dion’s former advisor says, Canadian-made engines are powering the air force of an “often ruthless government.”

Canada’s recent flirtations with China display a similar downplaying of human rights. In March 2017, speaking in reference to expanding economic ties with China, Canada’s incoming ambassador to the country, John McCallum, gushed: “more, more, more.” That goal soon became a key economic and foreign policy pillar for Canada. But China says it’s not interested in growing the economic relationship unless its abysmal human rights record is left out of any trade talks. It has also demanded an extradition treaty with Canada, which China hoped would pave the way for alleged fugitives to be sent from Canada to face justice in China. Despite the Chinese justice system’s reputation for torture and use of capital punishment, including for non-violent crimes, Trudeau soft-pedalled the contrasts with Canada, saying the two countries have “different systems of law and order and different approaches.” Canada agreed to discuss an extradition deal with China last year, but after some outcry, McCallum now says an agreement is a “long way” off.

Once vague, Canada’s ultimate plans for China are becoming clearer. After several rounds of recent exploratory trade talks, Trudeau announced during a trip to China this month that his goal is to kick-start formal negotiations for a bilateral free-trade agreement. Making a pitch for a seat on the UN Security Council last year, Trudeau said Canada’s core values, such as respect for human rights, play a “pivotal role” in ensuring international peace and security. But as the Liberals continue to chase Chinese investment and access to Chinese markets, how forcefully they press human rights concerns will say a lot about their real priorities.

If Canada’s priorities are hazy in China, in Ukraine, they’re anyone’s guess. The Canadian government is publicly musing about supporting a peacekeeping mission there but, has stopped short of committing actual resources. At the same time, the government is signalling its openness to sending weapons to the Ukrainian army, which is locked in bloody war with Russia-backed rebels in which over 10,000 people have died since 2014. It’s a curious dance, and the Liberals will soon have to decide if they’re fierce enough backers of Ukrainian sovereignty (there is a sizeable Ukrainian diaspora in Canada) to arm one side of the conflict—or if they will instead take up Canada’s more traditional role as defenders of peace.

The consequences of all this indecision and gamesmanship may soon start to pile up. Following through on the scope of the initial peacekeeping promise might have gone a long way to achieving the Liberals’ long-stated goal of winning a temporary seat on the UN Security Council, which comes up for a vote in 2021. A win would be a big victory for Trudeau and an official indication that Canada is truly back in the good graces of the UN, where, under Stephen Harper, Canada was humiliatingly passed over for a Security Council seat in 2010. But to win, Canada will need support from Asian and African countries where peacekeepers are badly needed. After dragging out the peacekeeping decision and coming out with a downgraded offer, winning that support increasingly seems like a lost cause.

Canada’s clout on the world stage could suffer too. There’s been a lot said about the power of Canada’s moral leadership in promoting international peace and human rights—and yet talking up these values while only applying them selectively is likely to harm our moral image. Our allies, too, may tire of our antics. When Canada stalled for time on the peacekeeping decision, Germany and Belgium dutifully jumped in to fill the gap. Now that we’ve left them holding the bag, they may think twice about helping us in the future.

Until now, Justin Trudeau’s ability to conjure up an aspirational vision of Canada’s role in the world has been an asset. But as we get deeper into his mandate, it’s becoming increasingly clear that Canada’s actions on the global stage are at odds with that vision. Without a recalibration, his word (and Canada’s) will only carry weight for so long.

Corbett Hancey is a Toronto-based journalist. He has reported for the CBC, The Toronto Star and VICE, and was the 2016 Gordon Sinclair Foundation Reporting Fellow in Lebanon.