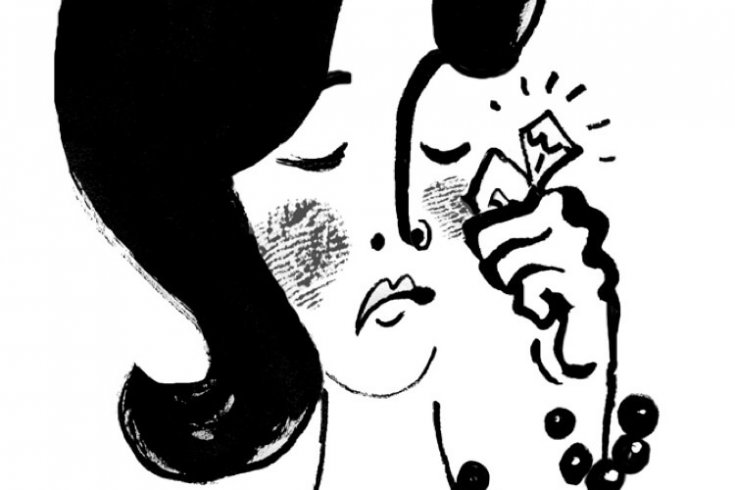 Just before my first large-scale piece of very personal writing was published, I dated N., a comedian whose priority lists generally wouldn’t extend beyond “get salsa.” He was right for me because at the time I couldn’t handle much more. I was emotionally tapped out. Arrogance was telling me everyone would read my big, dumb opus, and self-loathing was telling me everyone would hate it. N. had a clonazepam prescription he’d accidentally spilled beer into. Before falling asleep together, we’d chip two chunks from the congealed orange mass and swallow them.

By the winter of 2010, the writing was out in the world, and the critical response was good and fine, and I no longer needed any boys or any medications. I decided it was time to turn myself into the optimal modern adult woman.

At first, I took pigeon-sized steps: I returned a DVD that was seventeen days late, and located a dry cleaning receipt from under a pile of tiny paper scraps so I could pick up the clothes that had been left to languish since before my book was published. I caught up on all the grown-up television my excellent writer friends loved. I began dressing alternately like Joan Holloway and Don Draper, all fresh blazers and trim skirts, and even clumsily knotted scarves, sometimes.

Lonely at the Top?

Barbara Amiel, advocate for the fabulous

After the release of The Devil Wears Prada, Barbara Amiel published an essay in defence of her friend Anna Wintour, on whom the character Miranda Priestly was based. Priestly is a high-powered editor who, despite it all, has “no friends, a husband who has left her and only the cold comfort of her loving children, a Paris hotel suite, an Upper East Side Manhattan townhouse, a powerful job she adores and a salary of a million bucks.” Amiel, whose fourth husband is currently serving time in a US prison, takes umbrage at this depiction of fantastically successful people. “Since time immemorial,” she writes, “people of limited or average ability and energy have consoled themselves that they understand the more important values in life, such as relationships and intimacy, as though these things were not available to energetic, talented people.”

One night, tipsy off the fumes of my new-found hubris, I decided to run to Casa Loma and jog up and down the Baldwin Steps, stopping to do lunges and girl push-ups at the top. At the end of the set, I flopped face first onto the frozen ground, happily noting that my garden hose arms seemed to be the only part of me that was weak.

The phone was ringing when I got back to my apartment. It was N., calling to complain about life and everything in it. He said he was lying immobile on his couch, anxious and hungry, trying to decide whether to perform in the comedy show he’d committed to. He was fairly certain he would die if he stepped out his front door.

Seizing the opportunity to show up at his house with my pink cheeks and winning attitude and financial solvency, I offered to bike over with a slice of gourmet pizza and a soft drink. I felt like a fancy Rocky. The world was just a bunch of hanging meat I could beat up with ease. I became impatient with glee at the idea of saving him with pizza and seeing my vainglorious self reflected back at me in the lenses of his Scotch-taped glasses.

His voice was whiny with gratitude and embarrassment.

I stood for a long time in front of the display of steaming pizza, measuring gloss factor to topping content, puzzling over which slice would quell his malaise—I had, after all, been exactly where he was, just months before, when we were still dating. Eventually, I asked the pizza server for a Calabrese, which appeared to be the manliest and most comforting pie they sold.

I carefully slid the bagged slice into the main section of my large leather handbag, and put the soda in the pocket of my little jacket to keep it exposed to the cool air.

Standing on the pedals of my bike, I zigzagged through moving and standstill traffic, blasting under a red light. I rang my bell loudly as I bobbed by a young rake on a bicycle that looked as though it should be faster than mine.

As I neared a plugged-up intersection, I swerved around a giant black Lincoln Navigator that was parked too far from the curb. The space between it and the streetcar track was slim. My wheel went straight into the track and became stuck. My body began to fly over the handlebars, and for a moment I was certain my face would mash on the pavement and the car behind me would mash me even more and that would be that.

Jerking my neck back, I managed to keep my head up and my limbs loose, which caused the bike to fall to the side and my feet to hit the ground squarely. I jogged a few steps to compensate for the momentum, then turned around and shakily dragged my bicycle back onto the sidewalk. Breathing heavily, I wondered if I was built for this kind of speed.

I rode the rest of the way to N.’s apartment cautiously. Before ringing the doorbell, I composed myself by smoothing my clothes and hair, and the pizza bag, which had been crushed in the fall. He greeted me at the door with a pat on the shoulder.

In his kitchen, I watched him pour olive oil onto the ham and the mozzarella and blue cheese. I started to cry. Suddenly the world seemed full of cars to smash into me and break me, and I obviously had no control over the zigzaggy momentum that propelled me forward. He looked up from his pizza, his eyebrows shaped like the roofs of houses. I explained what had just happened. He gave me a short hug. I cried harder. He said, “Do you need a longer hug than the one I just gave you?” I told him it might help a bit. He squeezed me awkwardly. “Sorry I’m acting like such a lame chick right now,” I said.

We walked into the living room, and he immediately sprawled out on the couch; I took the floor. I watched him eat, wishing I could curl up into him and cry more, wishing my face weren’t so ugly and sticky from the tears. Wishing I could handle being my own emergency rescue. And wishing he would just give me a bite of that fucking pizza already, because I was so goddamn hungry.

After all that, N. didn’t go to the show; the evening was a waste. I biked home without incident, then I sat down at my desk and began to write.

Grief Struck Me Speechless. Learning a New Language Helped Me Open Up

Article Club: Child Care for All