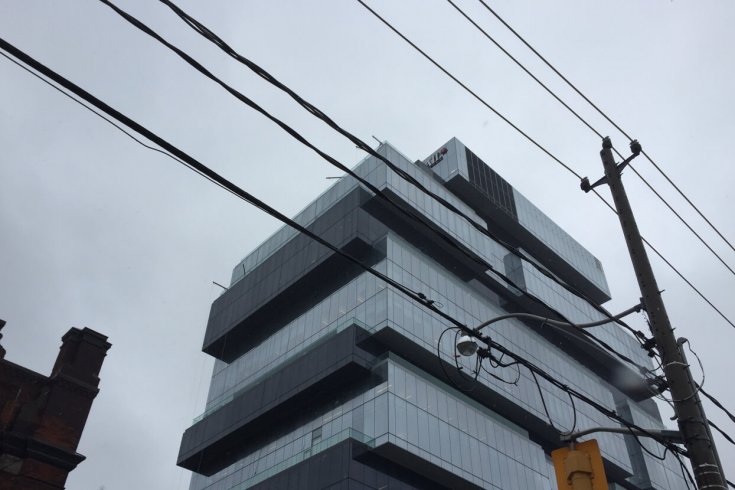 The new Globe and Mail building in downtown Toronto

Before I begin excoriating Globe and Mail management for their decision to suspend columnist Leah McLaren, it’s instructive to examine the career of another Globe columnist—a man who might be considered a sort of Anti-McLaren.

Jeffrey Simpson was the Globe’s national affairs columnist for three decades. During this extraordinary run he was both feared and feted by Canada’s political class. He won a Governor General’s Award, became a member of the Order of Canada, published eight books, and covered ten federal elections. Yet, throughout it all, he never really revealed himself to readers. In fact, the word “I” was conspicuously absent from his journalism. Even in his final column, published July 1, 2016, he refused the customary indulgence of getting personal.

That column began: “If a country can be measured by its arguments, Canada is a lucky country indeed. We have made many mistakes. We have had our share of dramas and crises, real or imagined. We should not be where we are, a united and prosperous country . . .” And on it goes: we, we, we. The word appears eighteen times in that column. The word “I”: not at all. From first to last, the man was public-minded. It was never about him. It was about the country.

In this regard, Simpson was a columnist of his time. And the breed is still vigorously represented by the likes of Charles Krauthammer, Paul Krugman, Andrew Coyne, and Martin Regg Cohn—all of whom use the vertical pronoun sparingly, if at all.

But over the last two decades, the field of column writing has changed, with what might be called “confessional punditry” increasingly replacing arm’s-length policy analysis. The National Post was a leader in this area. Some of Christie Blatchford’s most popular columns were about her dog. George Jonas would write about the good old days in Hungary. Rebecca Eckler became the forerunner of a new wave of younger female columnists who brought their personal lives into their work. Often, the most talked-about columnists—I’m thinking here of Barbara Kay and Heather Mallick—go back and forth between descriptions of their personal travails and broad generalizations about public policy. It’s become a formula for success because it creates a sense of personal intimacy between writer and reader.

The trend also allows editors to go after young writers, who may not have lived long enough to write about anything but themselves. In particular, these writers are encouraged to dive directly into their personal experiences with sexism, racism, homophobia, and other forms of bigotry. In recent years these stories have consistently lit up social media, which editors love.

But, as the Globe shows us with the McLaren case, these editors want it both ways. They encourage pundits to spill their guts all over the page, but walk away when readers complain about the mess.

McLaren’s gut-spill came on March 22, when the Globe briefly posted a piece on its website in which she described her experience at a party many years ago, when she chanced upon the baby of Conservative politician Michael Chong. According to McLaren’s account of the surreal episode, she began preparing to dry-breastfeed the child before being interrupted by Chong. The column was online for only a few minutes before being taken down. It wasn’t widely disseminated until a cached version began circulating on social media this week. And it wasn’t until the ensuing controversy erupted that the Globe acted. The timing suggests that the Globe isn’t punishing McLaren for doing anything wrong, but rather for doing something people say is wrong.

Except that she didn’t actually do anything wrong. No one disputes that her piece was profoundly weird. (Drew Brown of Vice has written the authoritative evisceration in this regard.) But if I suspended every writer who wrote something weird, I’d have no one working for me except Jeffrey Simpson clones. Many of Canada’s most promising up-and-coming writers take all sorts of bold risks in their work, especially when it comes to mining their personal lives.

Even when a piece completely crosses the line into loony, unpublishable weirdness, as McLaren’s arguably did, it’s still not the author who should take the fall, but the editor who signed off on it—or who mistakenly hit the “publish” button. As Matt Gurney wrote in this space just recently, an editor’s first imperative is to prevent writers from embarrassing themselves or the brand. Yet to my knowledge, no one in the Globe’s editorial back office has been disciplined. This makes no sense, and suggests that the newspaper is operating on panic, not principle.

In fact, the Globe hasn’t offered a theory explaining, even on a nominal basis, why McLaren was suspended—just legalistic boilerplate about how no one, including McLaren herself, is allowed to talk about it. As an exercise in institutional ass-covering, the Globe’s move seems not only unprincipled, but also strangely incompetent. Even my former National Post colleague Chris Selley, a journalist who usually rolls his eyes at melodrama, was moved to tweet: “Dear @globeandmail: Reinstate Leah McLaren immediately or explain her suspension to my satisfaction, or I will cancel my subscription.”

Eventually, McLaren will get her column back and we will all move on from this unsettling episode. But perhaps, before doing so, we editors might recognize the responsibility we owe to the writers we encourage to put their personal lives on display for clicks. When that tactic backfires, don’t blame the writer. Blame yourself.