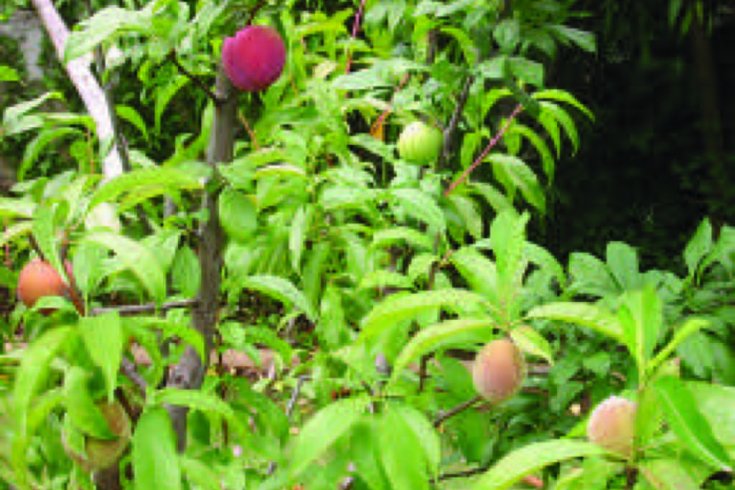 The apricot, nectarine, peaches, and plum pictured here amid cherry blossoms all grow on the same tree in Carrasco’s backyard. / Photograph by Luis Carrasco

santiago — Luis Carrasco’s invention is, at first, hard to make out among the shrubs, trees, and rose bushes in his large backyard in an upscale neighbourhood at the foothills of the towering Andes mountains. At first glance, it appears to be a common-enough plum tree, if a little oddly shaped. A closer look, however, reveals that not all of its leaves and branches are quite the same — some have broad heart-shaped leaves, others have thinner dark-green foliage. From November until March, when the other fruit trees in the backyard are bearing mandarin oranges, peaches, or apricots, this six-foot-six stalwart grows peaches, nectarines, apricots, cherries, and plums — all at once.

The tree is the product of four years of painstaking labour. The fifty-year-old Carrasco toiled patiently in his garden here, below the ever-beaming Chilean sun, on evenings, weekends, and days off from his job as a manager at the Chilean operations of U.S.-based fruit importer Ballantine.

The idea for such a tree first came to him when he was in university, studying agronomy. But he didn’t begin the project in earnest until 2000, when he mentioned his frustrated dream to his daughters, who were fascinated but immediately thought it impossible. Their skepticism spurred him to action.

He says he was troubled by the sense of grim resignation, a premature realism, in his daughters, then aged sixteen, fourteen, and seven. At an age when kids should believe in magic and in their own ability to change the world, they, like many young Chileans, instead exuded pessimism and a lack of faith. Determined to inspire them, he revived the idea to create a marvel of nature in his own backyard.

“They said it couldn’t be done because if it was possible, someone would have done it already,” says a thin, bespectacled Carrasco, with a defiant grin. “I wanted my daughters to see what they can achieve if they strive for the impossible. And the idea of this tree seemed to have a magical component.”

Indeed, it does. Not only does the tree yield five different fruits (which each smell and taste as peaches or apricots or cherries should), it produces multiple varieties of the same fruit (such as white-fleshed and yellow-fleshed peaches).

No genes were manipulated in the production of this tree. Carrasco achieved his feat the old-fashioned way, through the time-honoured tradition of grafting. While fear of genetically modified foods is rampant in many places around the world, including Chile (a survey showed 73 percent of the population is wary of them), grafting is a practice that has been used for more than three thousand years by farmers the world over to grow heartier fruits and more productive, disease-resistant plants.

“It’s like using a surrogate mother to carry your fertilized egg,” explains Carrasco. “You don’t transfer any genetic material [between the different plants].” All the fruits the tree grows are of the genus Prunus, so Carrasco couldn’t stray too far from what nature intended.

Despite grafting’s long history, nothing like the multiple-fruit tree, which has no commercial applications, had ever been created. The process remains trial-and-error. For a graft of this kind to take, a bud from one plant must be implanted just under the bark into the branch of a related plant. The buds then have to be covered by the cut bark, allowing no air between the bud and the branch. Carrasco had to perfect his incisions and implanting technique before seeing results. He knew it could be done in theory, but no one had ever accomplished what he set out to do.

Chilean society is extremely family-centred, and Carrasco enlisted the whole family in the project. His daughters dug the hole and watered and trimmed the mother tree as it grew. In November of 2002, the tree bore flowers from four different fruits. A year later, there were flowers from five types, four bearing fruit. This achievement put Carrasco in the Guinness World Records book for “The Tree With Most Different Fruit.” This month, he expects to see the same results but with more than ten varieties of fruit.

Carrasco may be on to something big, but he says the real reward was the look on his daughters’ faces when they saw the first fruits of their labours. “They were simply amazed,” he says. And given the magical ending, he has decided to turn the experience into a more literal fairy tale. Carrasco is putting the finishing touches on a children’s book about “an enchanted tree,” which he hopes to publish soon.