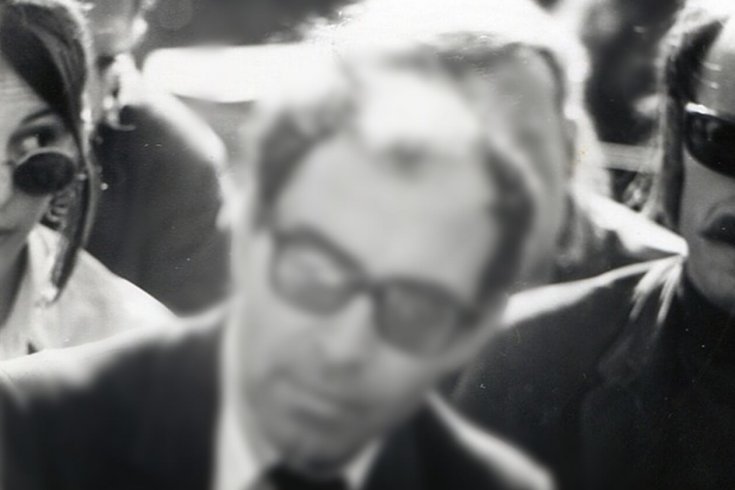 What on earth do you ask Jean-Luc Godard? It’s like wondering what to ask Bob Dylan. Both are icons and iconoclasts from a bygone pop culture, famous for turning their back on the audience and messing with media types. The last time I asked Godard a question was in 2001, when I stuck up my hand at a press conference in Cannes for Éloge de l’Amour (In Praise of Love), a non-linear riddle of narrative about a writer trying to make a film about love. I can’t recall what I asked him, only that he was smoking a monstrous cigar and his answer was short and cryptic. I do remember loving the film, which I compared in print to Dylan’s Time Out of Mind, calling it “a poetic elegy to a vanishing cinema, to Paris, and to memory itself—a film that holds time in its hand like a wounded bird.”

In other words, an old man’s movie. Seventeen years later, at this month’s seventy-first annual Cannes Film Festival, I got to ask him another question. At eighty-seven, Godard is now truly old and more enigmatic than ever. The Image Book, which premiered last weekend in competition at Cannes, is a kaleidoscopic mash-up of film clips, sampled from the entire span of film history, from Jean Cocteau’s Beauty and the Beast and Alfred Hitchcock’s Vertigo to Michael Bay’s Benghazi thriller 13 Hours. With bits of violent news footage spliced in, the result is a fragmentation bomb of images that have been distorted, saturated, and reframed to compress a century of anguish into an incendiary essay of horrific beauty. It’s as much an installation as a film, a maze with no exit. Throughout it all, Godard’s craggy voice rumbles up from a cavernous soundscape, dispensing spiky epigrams about art, war, religion, terrorism, and—the film’s favourite vehicle of fate—trains.

As the godfather of the new wave (or just God to some devotees), Godard towers over the canon of world cinema. And his presence was ubiquitous in Cannes this year, from celebrations of the fiftieth anniversary of May ’68—when he helped shut down the festival by hanging off the theatre curtain to stop it from rising—to the festival poster, which shows a dreamy kiss between Jean-Paul Belmondo and Anna Karina from Godard’s 1965 film Pierrot Le Fou.

But the director himself was missing in action. Most people didn’t expect to see him at the press conference, and was he not expected at the press conference the following day. However, he made a surprise appearance from his home in Switzerland—via FaceTime. As technicians scrambled to connect him remotely to a roomful of journalists, with all the technology available to one of the world’s largest film festivals, we expected to see Godard’s image projected onto a large screen. Instead, he appeared on an iPhone that was held aloft in front of a microphone by his sometime cinematographer Fabrice Aragno. As TV cameramen huddled around, trying to focus on the tiny screen, journalists queued up to ask their questions one by one at the iPhone altar, like supplicants receiving communion.

Marshall McLuhan would have loved it. He would have appreciated the fact that being close enough to touch Godard’s disembodied image allowed for a more intimate and meaningful interaction than if he had been present in the flesh—a private audience that was being overheard, rather than an interrogation performed across a public space.

Also, it was a very different Jean-Luc Godard than the one we were used to. His voice, which was frail and trembling, sounded ancient, as if each word might be his last. And his behaviour was uncharacteristically warm and passionate, almost convivial. Still, in true Godard fashion, almost every answer unfolded as a free fall of non sequiturs, with lines like these: “A film shows what is happening, but very few films are designed to show what is not happening. I think one has to think with one’s hands and not just with one’s head.”

As I stood in line, trying to formulate a question, a Toronto colleague, Peter Howell, stepped up to the plate and reminded Godard of famous axiom attributed to him—that every movie needs a beginning, a middle, and an end, but not necessarily in that order.

“Well, if I said that quite some time ago,” Godard replied, “it was to go against Spielberg and others who said there has to be a story with a beginning, a middle, and an end, so as a joke, I said these three things don’t have to be in that order.” Then Godard jumped to an algebraic equation: “If X plus three equals one, then X equals negative two, and when you produce an image, be it of the past, the present, or the future, you have to do away with two images each time to find a good film.”

Laughing, the director admitted his algebra analogy was “not very successful.” But the calculation of unknown variables is an apt metaphor for editing, and The Image Book is all editing. There’s no original footage, no actors required. Godard says he spend four years sifting through “thousands of films,” and his movie begins with a hand fingering a strip of celluloid. Most films end in the cutting room, but for Godard, that’s where it begins: “The editing comes first,” he said, “which means one can be much freer, because editing, even digital editing, is done by hand, and as we say in the film, man needs to think with his hands. Just imagine for a few minutes that you were forced to live for a whole day without your hands. How would you manage? How would you eat? How would you love?”

What about actors? Did Godard still believe in acting?

“I can’t really say,” he sighed. “Actors and actresses above all, you’ve helped me no end. I guess it’s their problem. I think they’re perhaps involved in politics, not in the sense of current affairs. A writer and philosopher, Claude Lefort, said modern democracies have turned politics into a separate domain of thought. Democracy contributes to totalitarianism. And I think a lot of actors today contribute to the totalitarianism of the filmed image, as opposed to the thought image.”

Godard has a way of spinning every question into a cosmic tangent. A Brazilian journalist asked him about his approach to sound. A technical question. Godard replied that one his original titles for the film was An Attempt at Blue. “There are things that text and language cannot convey,” he added. “The voice is not the same as speech. And speech is not necessarily language. When it came to sound, the aim was to separate the sound from the image. We didn’t want it to be just an accompaniment. We wanted a true dialogue between the sound and the images.” Alluding to cinema’s original pioneers, he added, “I believe that the Lumière brothers, when they filmed the arrival of the train in the station, were thinking of all this.” Without a pause, he then jumped straight to French impressionism. “What the impressionists have brought into art is light. Then Cézanne brought colour, and colour has something to do with speech—even if we are talking about Heidegger here. The sound should not be too close to the images for me. The perfect screening should be in a café instead of on a TV screen. You’d see the film as a silent film, the sound would come from here and there on a loudspeaker, and the person sitting in the café would realize that the sound and images were related.”

Suddenly, it was my turn. I’d come up with a question, but amid all this stratospheric discourse, I wasn’t sure it would fly. Because it was personal. To watch a film by an eighty-seven-year-old man that presents the past as a conflagration of impending apocalypse, it’s hard not to think that it’s also a portrait of the artist as an old man, equating the end of the word with own mortality. The Image Book may be his last film, considering his age. (If so, it would serve as a worthy final testament, like the final albums by David Bowie and Leonard Cohen, Blackstar and You Want it Darker.) But in the moment, as I gazed at the kindly old face on the phone and searched for my words in French, I didn’t say any of that.

This is what came out: “Where do you find the courage and hope and energy to continue making films? You are a kind of passenger on this train of human history, which is full of horror yet so poetic at the same time. Will you continue to make films?”

“Yes, of course. If I can. It doesn’t depend on me. It depends on my legs, it depends a lot on my hands, and it depends a little bit on my eyes. Most people today have had the courage to live their life but don’t have the courage to imagine it anymore. I have the courage at least to imagine my life, and this makes it possible to continue and to board that train, the train of history. I also think of all the people who board a train every morning to go to work but don’t have imagination unless they work in startups.”

Another couple of journalists took turns at the mic, and that was it. The oracle was getting tired. He had a cough. Maybe something to do with the cigars he still insists on smoking. As he signed off, he said, “I am starting to . . . ” and the sentence was left unfinished.

Brian D. Johnson is a long-time film critic. He has also written fiction and directed a movie, Al Purdy Was Here.