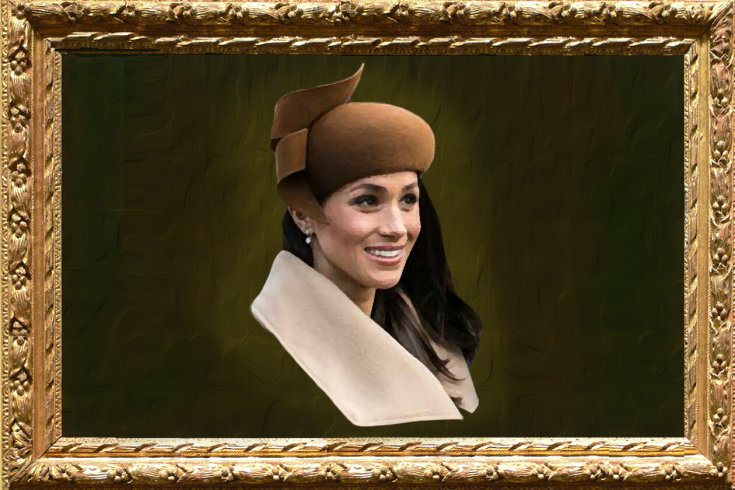 Prince Harry and Meghan Markle’s wedding coalesces many things that I love: Blackness, Black women, the royal family, the true love story of Charles and Camilla, and spending money. I have long defended my fascination with the royal family as a breezy pastime, as a consideration of celebrity culture. But I find myself torn in every direction. On one hand, this means everything to me. On the other, it is just a wedding. There will be cake.

I wish I had one coherent thought about this wedding. The kind that forms an essay. A notable one, the collectible kind. But it feels rude to form an entire thesis around someone else’s wedding. The joy of a wedding is the way the eye skips over each detail quickly and renders a swift judgment. None of them are permanent; the only record is a positive one. A critical wedding guest is classless. “I know I wouldn’t have picked those linens” isn’t a thought one would write in the guest book, so why do more than whisper it in passing to the person beside you, who also wishes the couple well but is equally flippant? There are details we will miss. We can’t truly know Harry and Meghan the Couple, no matter how many cameras are pointed at them or how many press releases Kensington Palace offers. We can only make meaning from what Harry and Meghan the royals are allowing us to see.

Here are eight things I see:

To see a Black princess—and a loved one at that—is, in the realm of love and marriage, pretty good. I mean, I like it. When Harry and Meghan first had to acknowledge their relationship, Prince Harry put out a defensive statement in which he noted that Meghan and her family have dealt with an overwhelming torrent of abuse, including “the smear on the front page of a national newspaper; the racial undertones of comment pieces; and the outright sexism and racism of social media trolls and web article comments.” The statement is remarkable on two fronts. The royal family has always been wary of media. (In the days following the death of Princess Diana, the Queen had to be convinced to engage with the public outpouring of grief beyond her initial short statement.) And, more significantly, Prince Harry’s statement implicitly acknowledged the misogynoir—the interacting sexism and racism experienced by Black women—directed at Meghan when their relationship became public. Black feminist scholar Moya Bailey coined the term in 2010.

Meghan doesn’t identify as Black. She has spoken instead of being biracial. But the world, myself included, has labelled her Black. I claim her in the name of a history and a diaspora to which she is connected. Others are far less generous.

They—the royals—may yet confront the things that they’ve stood apart from in posture but wholly benefited from in practice: colonialism and its effects, namely, racism. The British Empire ravaged millions of people, bloodily carving borders where none had been before. The Windsors will grapple with it and fumble. My god, they will fumble. Until the last few years, the family has largely escaped repercussion; we are meant to affectionately chuckle at hearing that Prince Philip once asked an Indigenous person in Australia, “Do you still throw spears at each other?” His racism was cast as the harmless humour of a man who grew up in a different time.

But the past is still very present. Prince Harry’s own actions—such wearing a Nazi costume to a “colonial” theme party or using racial slurs during a military stint—became footnotes in the stories of his laddish behavior, and standard contrite apologies were issued.

In this new world, the way the Windsors confront racism will likely be a different type of comical, a comedy of intimate errors rather than a public spectacle of racism. They’re going to watch Black Panther and get too hyped up, and one of them—I suspect Charles—will wear an agbada, and my heart has already stopped just thinking about it. Someone, a titled relative but not necessarily one they see all the time, will ask a chef to make grits to make Meghan feel comfortable. I have already written a screenplay about being the fly on that gilded wall.

Marriage for Black women seems remote. According to data published by OkCupid’s cofounder, most men on the dating site rated Black women as less attractive than women of other ethnicities. Even once you get past the racial fetishists and Blue Lives Matter advocates, for Black women, dating non-Black people can be a minefield of offences.

This is why my interest in tennis has massively spiked since Serena Williams and Alexis Ohanian had little Alexis Olympia. At Williams and Ohanian’s wedding, each table was named after one of her grand-slam titles. It’s incredibly boastful, and yet I find it so sweet. At least 600 guests are going to be at Harry and Meghan’s wedding. Will the tables be named after each of the episodes of Suits she was in?

Will there be a real cultural reckoning by virtue of a prince marrying a Black woman? The Britain of Brexit is not in a mood to reconcile its discomfort with Blackness. The Windrush revelations—that long-term residents who arrived decades ago from the Caribbean and elsewhere were being deported or living under threat of deportation from the United Kingdom because they could not technically prove that they had permission to be there—are unfurling alongside the slow trickle of information about the wedding. If the wedding is a marker of some type of progress, then that progress is not felt in policy where it matters.

A curious effect of the “representation matters” axiom is that it evades talk of what is being represented. The entry of one privileged Black woman who can pass for white does not even begin to undo the damage done to hundreds of Black people who did nothing but work hard and contribute to their country. It is hopeful to imagine Meghan working from within and dismantling the royal family’s and the nation’s sense of self. But one Black gospel choir (a very good one!) at a wedding cannot do what does not want to be done.

There has, of course, been Black royalty. The royal houses of Africa—from Swaziland (or the Kingdom of eSwatini) to the ancient dynasties in Egypt and emperors of Ethiopia—led and governed their peoples. Angola is so named because the Portuguese mistakenly believed that “ngola” was the name of the place. It means ruler. Queen Nzinga was elected to the throne after the suicide of her brother, the king. A diplomat, she negotiated a peace treaty with the Portuguese, but when they disregarded its terms, taking whatever they wanted regardless of the locals as colonizers are wont to do, she led armies into battle against the perfidious Portuguese. A cousin who has lived in Kenya, Britain, and now Canada has been in awe of the wedding. She said, “We’ve always been there, but never royal.” And yet if, as my cousin said, we’re not royal, it is because of our histories have been truncated and stripped from us.

This is not a miscegenation sell. This not about Winning the Love of a White. Black women are not made more valid or more human because a white person loves them enough to get married. This is not about disguising a wedding by the world’s most privileged and wealthy as liberation. There is no revolution to be found in the royal family. Grand weddings are an intimate exercise in diplomacy while simultaneously being a public spectacle on a large scale. They bear a preposterous weight.

Holding simple joys does not mean the shedding of one’s critical faculties. At least, that is what I tell myself. My passing interest in the royals doesn’t absolve them of their history any more than my loving the music of Kanye West absolves him of his current turn towards misinformation. I may not be a superfan, but still, in participating, I imbue the royals with power. As Lauren Collins wrote recently for The New Yorker, “In Markle, the Royal Family has found someone who can refresh their corporate culture even while being subsumed by it.” This is like when Friends added a Black character in the later season. The royals have found a way to hook me in.

In Margo Jefferson’s memoir, Negroland, she writes about a day in the early ’90s when she and a friend went for lunch. Discussing the recent deaths of celebrities, the friend confesses in a whisper, “You know, in a way, Audrey Hepburn’s death meant more to me than Thurgood Marshall’s.” Jefferson shares the sentiment. For two Black American girls who became women, the princess-esque pristine life and death of Audrey Hepburn resonated more than that of the first African American to serve on the Supreme Court. As Jefferson writes, “Equality in America for a bourgeois black girl mean equal opportunity to be playful and winsome. Indulged.”

Meghan, too, grew up in relative wealth and privilege. And Meghan will be indulged: a wedding in a castle, no maid of honour to steal the show, a handpicked public to admire her on the grounds of Windsor Castle, and a larger audience playing along at home. Those graces, indulgence and attention, paid to white women were once my own desires. I grew up in this culture, and I cannot pretend to not have been marked by it. My heart breaks at the story of young South African immigrant girl profiled in the New York Times last weekend who wants desperately to access Britishness. For her, Meghan is the key through this door. She begs her mother to be allowed to use her more English middle name instead of her African first name.

Vicky Mochama is a writer in Toronto.