The Children We Saved | The Walrus
Skip to content 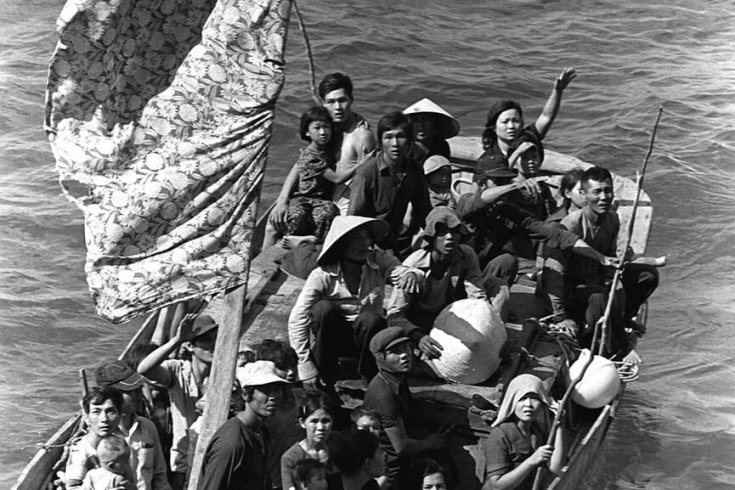 Vietnamese refugees waiting to be rescued.

I am not the first person to make a connection between Canada’s response to the Syrian refugee crisis and to the humanitarian crisis that happened when refugees fled the Indochina region after the Vietnam War. The website CompassionateCanada has begun documenting the stories of refugees to Canada, among them the brilliant writer Souvankham Thammavongsa. She writes, “I am the child Canada saved.”

I recall the open-hearted way in which Canadians welcomed refugees into their communities and into their homes in 1979. My parents, along with other citizens from my rural community, not only sponsored a family, but also renovated an apartment for them to live in, organized for them to learn English, and helped them find work. Many Canadian communities opened their homes in similar ways. I was just an ignorant fourteen year old at the time, but even so, I could see that however difficult and complicated this was to enact, it was a necessary duty.

Recently, as the now-famous photograph of the drowned body of Alan Kurdi circulated at fever pitch on social media, and it became known that the boy’s family was hoping to come to Canada, two things happened. First, the tragic image of the boy took on a sacrificial symbolic value. People responded to this image with such fervid and intimate intensity that Alan became an Every Boy, and to a large extent anxieties that people may have had about Middle Eastern radicalism were swept away, and replaced with a sense of urgency. In short, people seemed to see through their own tacit xenophobia. We were able to be human in the face of difference and political ignorance. The second thing that happened is that many Canadians turned to their federal government for a solution. We wanted to enact our humanity.

According to the Toronto Star, of the 1,000 Syrian refugees who have been admitted to Canada in the last year, only 188 were government-assisted claimants. The Canadian government pledges to help 10,000 Syrians in the next three years but has paced itself to admit fewer than 600. To put that into context, the Office of the United Nations High Commissioner for Refugees (UNHCR) estimates there are currently more than 4 million Syrian refugees.

In 1979–80, Canada accepted over 60,000 refugees from Indochina. That is to say, thirty-five years ago, Canada welcomed 100 times more refugees from Indochina (within a two-year span) than it is set to welcome from Syria (within a three-year span). The Government of Canada’s online teaching portal has a section entitled “Canada: A History of Refuge,” which outlines our history of tolerance and humanitarian outreach. Is not Canada historically a safe haven for immigrants? Our bureaucracy is limiting our ability to express our cultural heart.

In the few decades since Canada opened its hearts to the people fleeing Indochina, we seem to have lost our flexibility when it comes to kindness. There was a time when I used to cite that the difference between Canada and the United States was one of approaches to diversity: we were the mosaic; they were the melting pot. We defined Canada as a nation of various nationalities. Certainly there was, and is, scattered racism, and occasional cultural dilemmas.

But now a certain risk-aversion and fear has taken hold. Awful things have happened in our lifetimes and these awful things have created an atmosphere of “terror.” It is easier to maintain this fear, a fear that is unproductive and self-fulfilling, than it is to parse the complex workings of war and peace.

While I do not think that a nation can (or should attempt to) approach a utopian ideal, I do believe that a diverse and changing population is a positive defining quality in itself. I also believe that an exclusion of Syrian refugees will never stem radicalism. We have witnessed the effects of exclusionary approaches to difference enough to be able to assess how poorly such a system works toward building peace.

And what loss does our society suffer when it fails to allow its citizens to enact our deepest ethical impulses? The answer to this is twofold. We incur the corruption of our hearts, which is not a trivial loss in my opinion, and more substantially, we incur the loss of the very people we turn away.

In my 2014 novel, All the Broken Things, a fourteen-year-old Vietnamese boy grapples with his experiences of war, and of fleeing home with his parents. His father dies on a small fishing boat while leaving Vietnam, and this is an insurmountable loss for him. I wrote the novel, in some way, to come to terms with my own ignorance about the Laotian family my childhood community sponsored. I was dismayed and cross with my ignorant teenage self.

One of the people I interviewed to understand the devastation that the “boat people” faced was my mechanic. Besides being one of the kindest men I have ever met, he is also a good example of what giving opportunities can mean for this country. If trauma can travel through the generations, so can kindness and healing. He and his wife have two daughters, both of whom they have given the gift of artistic lives. Their youngest daughter is herself just fourteen. This is the astounding, award-winning film she made about her father’s journey: Uprooted.

I wonder what would have become of my mechanic and his family if Canada had not opened its doors to the people of Vietnam, and by extension, I wonder what wealth of talent and innovation we foreclose upon when we fail in our current duty with Syria.

In the meantime, some options for people interested in learning more and helping: LifelineSyria, UNHCR, and Doctors without Borders.

Kathryn Kuitenbrouwer wrote the bestselling novel All the Broken Things.