The Cheshire Cat’s Grin | The Walrus
Skip to content 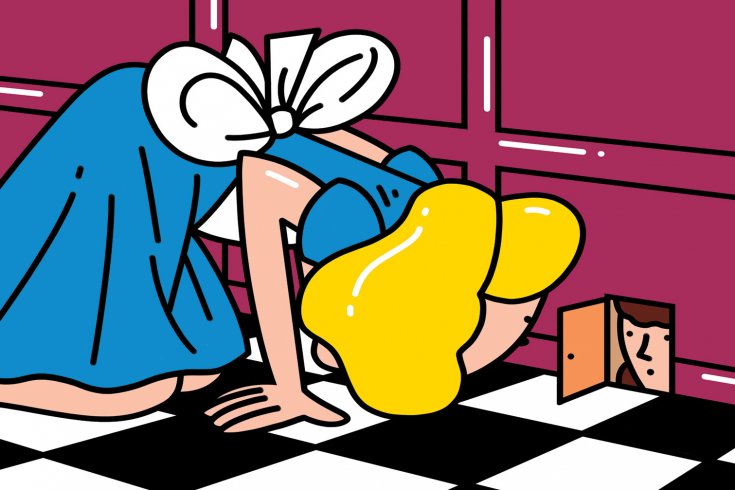 It was a guessing game from the get-go. Even on the day it was published in 1865, rumours circulated about the savage satire underlying Alice’s Adventures in Wonderland. Many of Lewis Carroll’s characters were understood to be send-ups of contemporary figures, and over the past 150 years readers have linked their names to philosophers, mathematicians, politicians, theologians, and artists of the Victorian era. Some identities the author was happy to reveal; others he was at pains to keep secret.

Lewis Carroll was the pseudonym of Charles Lutwidge Dodgson, an Oxford mathematician, logician, clergyman, and photographer. He always acknowledged that Wonderland’s real-life protagonist was Alice Liddell, daughter of the dean of his college, Christ Church. But Alice is only the beginning.

Two birds, the Eaglet and the Lory, stand in for Alice’s sisters, Edith and Lorina, while the Dodo serves as a caricature of Carroll himself; the author, who spoke with a mild stammer, was often heard to introduce himself as Mr. Do-Do-Dodgson. Non-avian avatars include the White Rabbit, a surrogate for Henry Wentworth Acland. Family physician to the Liddells (and Queen Victoria), he constantly checked his pocket watch and adjusted his spectacles as he hurried from one appointment to the next. The art critic and historian John Ruskin, Alice’s drawing instructor, is represented by the old Conger Eel; once a week, the character teaches drawling, stretching, and fainting in coils, just as his counterpart taught drawing, sketching, and painting in oils.

The list goes on—Carroll’s caricatures comprise a veritable who’s who of nineteenth-century Britain—but Wonderland’s most iconic creature, the Cheshire Cat, has proven more elusive than the rest.

Yet clues abound. Alice rather formally addresses the cat as Cheshire Puss, undoubtedly a reference to Edward Bouverie Pusey. As well as Carroll’s patron, Pusey served as a canon at Christ Church, whose coat of arms is emblazoned with four leopard’s heads, and whose students referred to the canons as the Ch. Ch. Cats.

There’s more to it. Take, for instance, the character’s peculiar smile, which has inspired as much speculation as that of the Mona Lisa. The expression “to grin like a Cheshire cat” predates Carroll by more than a century, but its origins are obscure, which the author alludes to in an exchange between Alice and the Duchess:

The Duchess’s response is typical of the non-answers Alice is given during her stay in Wonderland, yet the exchange suggests there’s a riddle to be solved nonetheless.

Decoding Carroll’s fairy-tale world is difficult, because each apparently rational insight into its nature is contradicted by the revelations of subsequent analyses—revelations often found within the specialized language Wonderland’s inhabitants employ.

Many of the characters use everyday words that have entirely different, formal meanings within the contexts of various academic disciplines. They might make sense from the perspective of a philosopher or a mathematician, say, but they sound preposterous when used in ordinary speech. In Through the Looking-Glass, and What Alice Found There, the Red Queen explains exactly this: “You may call it ‘nonsense’ if you like,” she says, “but I’ve heard nonsense, compared with which that would be as sensible as a dictionary!”

The trick is in finding the right dictionary. At the tea party in Wonderland, for instance, Alice is bewildered by the bizarre wordplay of the mad Hatter and the March Hare: “The Hatter’s remark seemed to have no sort of meaning in it, and yet it was certainly English.” She recognizes that the pair is speaking in logically structured sentences, but is also correct in concluding that their conversation has no discernible meaning—or perhaps no more meaning than an algebraic expression has in ordinary speech.

In the final chapter, during the trial of the Knave of Hearts, Alice objects to the Queen’s system of “sentence first, verdict afterwards.” Unknowingly, Alice has entered into an argument that employs the formal mathematical language of sentential calculus (today known as propositional calculus), in which, as the Queen says, the sentence (or formula) must be complete before any valid verdict (or conclusion) can be reached.

This formal system also requires the Queen’s ruthless application of axes, by which Carroll really means axioms. And in any system of logic or mathematics, contradicting the axioms (or rules) leads to chaos and collapse. So when Alice confronts the Queen and challenges her authority (“You’re nothing but a pack of cards!”), the trial literally collapses like a house of cards, and Alice’s dream ends.

Much absurd humour is derived from this sort of interdisciplinary wordplay. So, too, are the clues necessary to confirm the true identity of the mysterious Cheshire Cat. Sitting on the bough of a tree in one of the novel’s most famous scenes, he vanishes slowly from tail to grin, the latter of which “remained some time after.” Alice thinks, “Well! I’ve often seen a cat without a grin . . . but a grin without a cat! It’s the most curious thing I ever saw in my life!” And, curiously, it provides even more evidence that Pusey is the real-life Puss.

Just a few months before Wonderland was published, Carroll wrote The New Method of Evaluation, as Applied to π, a satirical take on Oxford politics disguised as a math lesson. In it, he investigates geometric coordinates and explains, “the locus of EBP [Edward Bouverie Pusey]: this was found to be a species of Catenary, called the Patristic Catenary.”

Today the term patristic catenary (Latin for “chain of the fathers”) is obscure, but it was not so in Carroll’s time. As one of the foremost authorities on the Christian Church’s early fathers and a prominent editor of their writings, Pusey—renowned for his translation of St. Augustine’s Confessions—was the greatest patristic catenary.

And the rabbit hole goes deeper still. In geometry, a catenary is a curve made by a chain suspended between two points, such as one might find in a suspension bridge. It’s a shape that Alice happens to describe perfectly: a grin without a cat. With this, Carroll not only provides more evidence that Pusey is the famous Puss, but he also gives us a mathematician’s solution to that old riddle: What kind of cat can grin? A catenary.

Understanding the hidden meaning of the Cheshire Cat’s sly smile is key to deciphering the other, less conspicuous coded mathematical language embedded throughout Wonderland, beginning with Alice’s fall down the rabbit hole. It’s possible to employ Fibonacci numbers and the golden ratio to construct a graph that perfectly replicates her descent. Later, by manipulating the numbers on the Hatter’s hat, it’s possible to explain by means of Fermat’s Theorem exactly what triggers Alice’s exponential “mile high” growth.

One might best compare Wonderland to Agatha Christie’s Murder on the Orient Express, in which each of the twelve passengers has a motive and an opportunity, but also an alibi provided by fellow passengers. It seems impossible for any of them to have committed the murder, yet equally impossible for none of them to have done so. Inspector Hercule Poirot determines that the only possibility is that the murder was committed by all twelve travellers—and such proves to be the case.

In Wonderland, a similar conspiracy is afoot: they all did it. Carroll’s is a world where multiple systems of equal validity are at play, a world of iridescent characters who seem to change identities from one reading to the next. Our iconic Cheshire Cat may lay claim to half a dozen: To classical scholars, he is the riddling Sphinx of Wonderland. To philosophers, his thoughts on dreams and madness mirror those of Socrates in Plato’s Theaetetus. A theosophist might trace him back to the Elizabethan alchemist John Dee; or a mathematician to Johann Bernoulli, who derived the equation for a catenary curve.

Before 1865, no one had produced anything quite like Alice’s Adventures in Wonderland. Apart from its sequel, nothing like it has appeared since. Of course, Carroll had a specific reason for writing it—he wanted secretly and subliminally to give Alice Liddell the sort of classical education that, being a girl, she would not have received any other way—and yet we remain spellbound by it today. Its multi-layered language can be adapted to so many disciplines, and the logic buried deep beneath the apparent nonsense can be read as a comical commentary on so many subjects. It’s easy to see why, 150 years later, readers have only become curiouser and curiouser about Carroll’s masterpiece.

David Day is the author of Alice's Adventures in Wonderland Decoded.
Sam Island