The Burden of Digital Existence | The Walrus
Skip to content 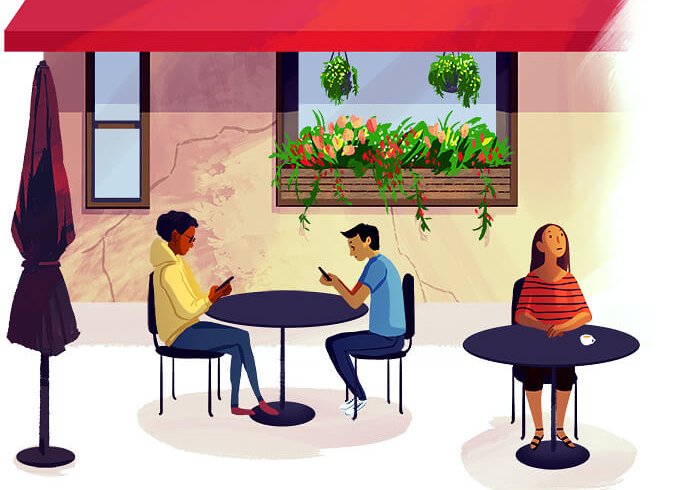 J ean-paul sartre and Simone de Beauvoir had an unconventional romance—fraught with love triangles, love squares, and, in one notorious episode involving the sisters Kosakiewicz and the philosopher Jacques-Laurent Bost, a love pentagon. Yet their bond lasted more than fifty years.

“It was a writers’ relationship,” Sarah Bakewell writes in At the Existentialist Café, her new book about the couple’s heyday as Parisian intellectuals. “They told each other every detail of their days . . . . Sartre was always the first to read Beauvoir’s work, the person whose criticism she trusted.” For hours on end, the two great thinkers would sit side by side at their desks, smoking cigarettes and making—to quote Bakewell—“no sound but the scratching of a pen.”

Many modern couples do their own Sartre-and-Beauvoir routines. But it’s caffeine instead of nicotine, keystrokes instead of pen scratches. More to the point, it’s often not work per se but inbox management, social-media chatter, web surfing—digital distractions that fling our minds to online realms full of strangers. Two minds in the same room, but scarcely in the same place.

Bakewell’s book helped me appreciate how much technology has compromised our social instincts. For all the bleakness of Nausea and No Exit, Sartre took great pleasure in his friendships. He even felt at home as a prisoner of war, living in cramped solidarity with other Frenchmen. “His own skin was the boundary of the space he had, and even as he slept he could always feel someone’s arm or leg against his own,” Bakewell writes. Were he still frequenting Parisian cafés today, Sartre would be horrified to see his fellow patrons drifting through cyberspace, insensible to the real-life humans in their midst.

Smartphones and tablets have made the burden of freedom utterly inescapable. Every date, every class, every social gathering can disintegrate if something—or someone—more interesting pops up on Tinder, Yik Yak, or YouTube. That’s why many university professors no longer permit students to use computers and other gadgets in the classroom: studies show that we learn more effectively if we’re forced to take notes the old-fashioned way.

When my twelve-year-old daughter gets together with friends, whole hours are spent in silence—eyes cast downward at glass slabs, thumbs robotically churning through brain-dead Instagram feeds. Entire tween years are now wasted in this narcotized way.

Then again, who am I to lecture? Shooting off emails makes me feel productive. Twitter makes me feel relevant. Facebook makes me feel popular. The fortysomethings of my generation will be remembered as the first adults in history who were not embarrassed to share a clinical addiction with their children. Every time I check my messages at mealtime, I destroy a tiny bit of whatever moral authority I need to control my kids’ online habits.

“There is no traced-out path to lead man to his salvation,” Sartre wrote. “He must constantly invent his own.” I took the first (unintentional) step on my own path during a recent trip to Copenhagen, when my Canadian smartphone started dropping out of the local cell network. It was maddening. There I’d be, waiting for an elevator, or for breakfast to arrive, or for a conversation to get more interesting—and I’d have nothing to do.

As the days passed, my phone remained useless. Yet my irritation began to ebb—a process I now recognize as detox. By day four, I noticed how nice it felt to enjoy a book without hearing a buzz or a beep every few minutes. I was spending more time reading—and taking more pleasure in the experience.

It was during this trip that I devoured At the Existentialist Café—and then scribbled down the bones of this column on a hotel notepad. Yes—with a pen. Just like an existentialist. My hand ached (it had been at least twenty years since I’d handwritten anything besides a cheque or a form in a doctor’s office). But I persevered with the experiment, to the point that I now feel emotionally equipped to spend a whole lunch hour without my phone.

Much of this, I realize, will come off as pretentious posturing from the Starbucks philosophe who cries out “Ah, le mot juste!” as he sets the nib of his fountain pen to the pages of his Leuchtturm 1917 journal. But turn off your smartphone for a week, and then let’s talk.

Nothing can relieve you of the burden of freedom. But the gadget fused to your hand is making your burden that much heavier.