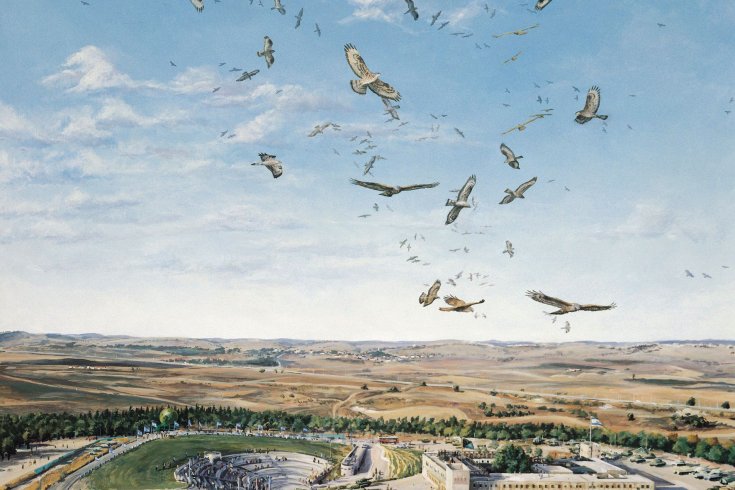 A flock of honey buzzards migrating over the Armor Memorial and the International Center for the Study of Bird Migration at Latrun, Israel. / Drawing by Martin Rinik

From a distance, the radar station looks like a roadside attraction—a giant light bulb, say, or the world’s largest golf ball. Located halfway between Tel Aviv and Jerusalem, it belongs to Israel’s International Center for the Study of Bird Migration, and it would be the most remarkable thing on the horizon if it didn’t happen to be right beside a plaza occupied by 200 out-of-service armoured vehicles. Welcome to Latrun, a sprawling, multi-faceted complex and the emotional centre of the Israeli army. It’s part military museum, part memorial site, and part ceremonial venue (with a 13,000-seat amphitheatre for military graduation ceremonies). It is also home to the odd-looking mrl-5 weather radar, reconfigured by the air force and a research team from Tel Aviv University, to track the flight patterns of birds.

Inside, the station isn’t much bigger than most bathrooms. It’s so crammed with equipment that its supervisor, a five-foot-seven former Soviet general from Moldova named Leonid Dinevich, has to shimmy sideways from one monitor to the other. Patterns on the radar screens, which look like watercolours made by a toddler, reveal the precise movement of numerous migrating bird species. Israel is no bigger than New Jersey, but because it lies at the junction of Africa, Europe, and Asia, it is a crossroads for migrating birds. And not just little birds. Large creatures, like pelicans and eagles, frequently clog up the skies. Twice yearly, 85 percent of the world’s white-stork population passes over Israel. Three-quarters of a million honey buzzards fly a similar route on their way from sub-Saharan Africa to eastern Europe and back again.

The director of the centre and the man responsible for setting up the army affiliated bird monitoring program is Yossi Leshem, a tall, broad shouldered, fifty-eight-year-old ornithologist with silvery hair beneath his knitted kippa. Even in Israel, a country of casually dressed people, he sports a decidedly laid-back look. On the day we meet, he’s wearing sandals and a faded T-shirt with an owl on the front. In a thick Hebrew accent (he pronounces “bird” more like “beard”), he talks quickly and bolsters his stories with arcane bird facts. (“Two hundred and eight species of beard fly over Israel during migration,” he tells me. “In total, that’s 500 million beards.”)

The story of how this enthusiastic, persuasively optimistic ornithologist teamed up with the military and why he chose Latrun as the site for his radar system goes back twenty years. As a grad student in the zoology department of Tel Aviv University, Leshem was desperately fishing around for a Ph.D. thesis topic—he’d been studying the nearly extinct lappet-faced vulture and conducting research from small aircraft. The Israeli air force pilot who was helping him asked if he wanted to see the military’s secret documents on birds. Curious, Leshem inspected the files and discovered a grisly collection of crashes, injuries, and even deaths. “I got, how you say? Gooseskin,” he told me. No prevention plan was in place; Leshem was informed by a colonel of the air force that bird-plane collisions were an inevitable part of air force life.

Then something happened that drove the colonel to act: a honey buzzard shattered the canopy of an Israeli Skyhawk fighter plane travelling 600 kilometres per hour. Like something out of a TV cartoon, the bird dived into the cockpit and hit the seat-ejection handle, firing the young Israeli pilot into the air. Unconscious, he parachuted to the ground and survived with a fractured vertebra. The plane crashed thirty kilometres away.

Hours later, the colonel was leaving urgent messages on Leshem’s answering machine, begging him to start research immediately. First, Leshem plotted the major bird migration routes and recommended a ban on low-altitude airplane flight in those areas during spring and fall. He then developed a poster and video campaign called Take Care, We Share the Air. Pilots were initially skeptical—they coined the term Bird Plagued Zones as a play on their phrase Missile Plagued Zones for no-fly zones. But they were won over by the program’s success rate: an immediate reduction of bird-plane collisions by 76 percent. Leshem was happy too. He submitted his work on Bird Plagued Zones to his supervisors and finally received his doctorate.

In the twenty years since, Leshem has devised other “anti-bird” strike methods: from a motorized glider, he reports on bird activity by cellphone to an airbase below (in the last decade he has clocked roughly 1,400 hours in the sky) and he enlists the help of radar observers at Israel’s Ben Gurion Airport to track the birds that fly too high to be seen. His work has paid off: so far, Leshem estimates he has saved the air force approximately $660 million (US) by reducing the number of air accidents. He may also have saved the lives of pilots and, he reminds me, the birds.

By far the single most effective device he has used to track bird flight has been the Russian mrl-5 radar system. Unlike the analog radars at the airport, the reconfigured mrl-5 is digital and can therefore send real-time warnings to air-traffic control centres. It is worth about $1 million (US), but Dinevich, the former Soviet general who immigrated to Israel in 1991, helped Leshem buy it from the Russian government for $20,000. “When you’re well-connected in Russia,” Leshem explains, “you can buy anything.” Dinevich, in his previous career, was responsible for 3,000 people and a network of forty-seven radar stations. Now, he leads a team of five scientists and engineers—all Russian immigrants—and happily spends his days inside a cramped station next to a tank museum.

Leshem installed the radar system at Latrun not because it is a site honouring the military—though this was factored into the decision—but because 400,000 people, most of them young Israelis, visit Latrun every year. “If I wanted to bring people to get excited about the birds,” he says, “I had to set up where the people already were.” Over the past few years, he has raised enough money, mostly from a nature-loving Jewish-American foundation, to build a three-storey bird-study venue. It should be completed by 2007, and he hopes that when school groups come to Latrun to check out the old tanks, they’ll drop by his centre.

Leshem never doubts the value of bird education. In a region crippled by border disputes, he considers the study of birds ideal for bringing Palestinian, Jordanian, and Israeli kids together. He launched a program recently called Migrating Birds Know No Boundaries, which enables children from across the region to follow migratory patterns on the Internet and meet each other on birdwatching expeditions. “The nice thing about being at Latrun,” Leshem says, “is that the tanks represent the past and the migration centre represents the future.” Coming from Leshem, you almost believe it.