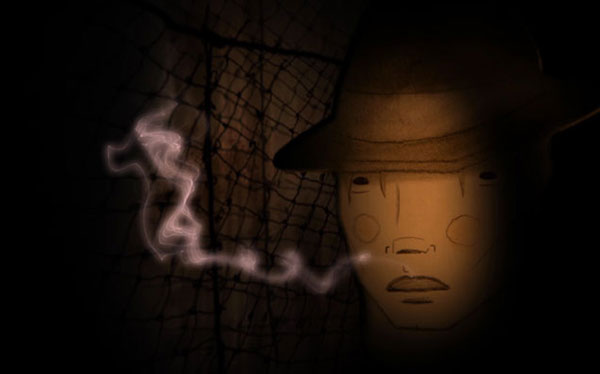 Heather O’Neill’s short story “The End of Pinky” walks the careful edge where all of her work takes place, between childlike innocence and bleak poverty, bedtime stories and social realism. The piece, about an amoral lowlife trying to find his conscience, debuted in the January/February 2008 issue of The Walrus. Now it’s become an animated short film, directed by Claire Blanchet, which screened in stereoscopic 3D at this year’s Toronto International Film Festival. Last week, I sat down with O’Neill and Blanchet to discuss the adaptation.

Chris Berube: Claire, when did you think Heather’s story might make sense for animation?

Claire Blanchet: I thought that when I read the story for the first time. The atmosphere I read it in was very evocative—it was this amber-pink, glowing, snowstorm-y night in Montreal. I fell in the love with the story—Heather’s language is very evocative. She creates a clear visual universe, and sounds and textures.

Chris Berube: There’s a clear film noir overtone to the adaptation. Heather, when you were writing the story, was this film noir universe what you had imagined?

Heather O’Neill: What you look for in collaboration is someone to bring something completely new to your work. It’s odd and different—it made me look at the story in a different way. But yes, I was having fun with the genre. It was half film noir, and [half] fairy tale. Claire got that. Her universe is so childlike; the characters look like children in the drawings.

Heather O’Neill: It’s like a cross between Lewis Carroll and Mickey Spillane.

Chris Berube: Why use Montreal as a setting? I associate Los Angeles, and other places, so closely with film noir.

Heather O’Neill: Montreal has a background crime story that’s so strong. Everyone I know has grandparents who were in the mafia at some point. It’s like the red light district of North America. While everyone else had prohibition, we didn’t, so there was this crazy, wild nightlife up here. There were people coming to live it up.

But the crime background is always thought about in such a romantic way, and it’s romanticized, so it’s a romantic film noir. I think it keeps with the Leonard Cohen vibe of Montreal.

Claire Blanchet: I’ve lived in Montreal for so long now. There were all of these beautiful movie palaces that started closing when I moved here. But now there are also these gorgeous buildings that have been restored. It’s a very layered thing. I love the idea of putting some of that in the film—the way things could have been or used to be—and mixing different time periods together.

Chris Berube: Claire, why did you want to make this film in 3D?

Claire Blanchet:I was working on a stereoscopic film called Facing Champlain for a museum in Quebec when I read Heather’s story. There is so much stereoscopic stuff being done at the NFB; you absorb a lot. I really learned to think of all of the space as requiring artistic choices. It’s a medium where we are just beginning to scratch the surface.

In my imagination, the city is one of the main characters of the story. There’s a Montreal-at-night feeling that I had when I read it, and I wanted to have the depth of field—to put a lot more into one shot that is discernable. There was something about the mix of the darkness and the innocence in the material that made me feel like it would be good to assemble it in a 3D space. There’s a chance to give the audience more options for what to look at. There’s a dark dangerous area, and then gentle snowflakes in the foreground, so it’s dangerous and comforting at the same time.

Heather O’Neill: I’ve actually never seen snowflakes captured on film that way. The film starts and there are these beautiful snowflakes falling on you in 3D, around your body.

I’ve never seen that in film, something that captures those early winter snowfalls in Montreal, where the flakes are so beautiful, like these tiny works of art from the sky. Claire’s film got that.

Chris Berube: You have a chance to show the movie in 3D at TIFF, which is how you want people to see it. But what about after the festival run?

Claire Blanchet: We’re so fortunate to show it in 3D here. It would have been hard a few years ago, since they didn’t have many 3D screenings in festivals before. But yes, afterwards, it will be interesting. There are lots of stereoscopic monitors and television, which opens up possibilities. But all of the choices I made had to make sense in 2D as well.

Chris Berube: Are you two planning to work together again?

Heather O’Neill: Claire is working on a new film [adapted from] a piece that I wrote for the Montreal Gazette. It’s creative non-fiction—the characters are myself and my nephew. Claire is turning us into cartoon characters, and we think that’s so much fun.

Chris Berube: Are you both doing voices for the piece?

Heather O’Neill: Yes! But my nephew is getting older—when I wrote it, he was seven or eight. His voice might be too deep now that he’s ten. I’m really excited about it.…We’ve always existed in the real world, and now we’re going into the animated one.

Chris Berube is an Audio Producer at Slate Magazine. He is a former podcast producer and host for The Walrus.