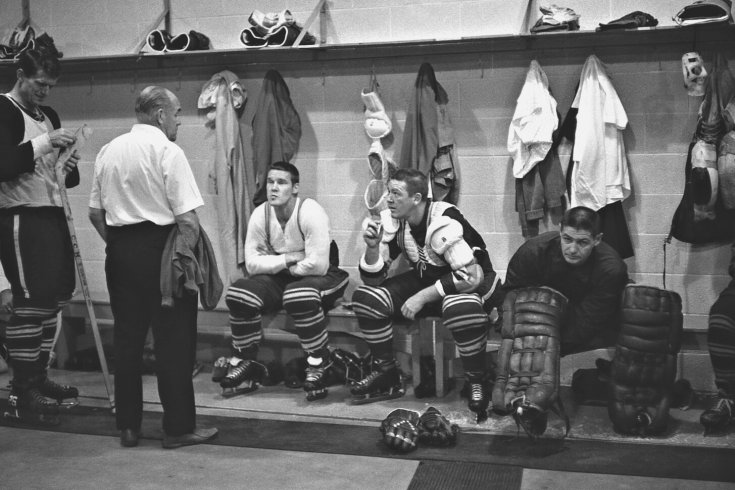 One day in 2006, the artist and illustrator Lewis Parker stood in his studio with his friend Dennis Patchett, disposing of his past. During his career, Parker had accumulated boxes upon boxes of files and ephemera, some of which now had to go. He and his wife, Eleanor, were moving from their home north of Uxbridge, Ontario, into much smaller retirement digs in Toronto. Whatever was not worth saving was consigned to a roaring fire in a forty-five-gallon drum. Out in the country, you could still do that sort of thing.

Parker passed the boxes to Patchett, and Patchett pitched them into the inferno, one after another, until a note on a file folder caught his eye: “Leafs 1965.” Inside were photographic negatives and contact sheets.

“What are these? ” Patchett asked.

Parker began to tell him a story.

“I think we’d better keep them,” Patchett said, not fully understanding what it was that he had preserved.

Lewis Parker was born in Toronto in 1926 and began studying art at the city’s Central Technical School as a thirteen-year-old. He left after three years to begin work as a junior illustrator with a local firm. In 1944, he enlisted in the army, arriving in Europe not long before the end of the Second World War. As a member of the occupying forces, Parker’s artistic talents won him work, first as an illustrator for a regimental newspaper, and later for the Maple Leaf, the paper distributed to all Canadian servicemen. Having built up a portfolio, he returned to Canada in 1946 to embark on a career as a commercial artist.

In the autumn of 1965, Parker received a call from Maclean’s. The magazine was sending a reporter to Peterborough to cover the Toronto Maple Leafs’ preseason training camp. Could he accompany the writer and shoot some stills to run along with the piece?

It was a conventional gig for a photojournalist, but unusual for Parker, who until then had never shot for publication. On the day the job was to begin, Parker waited at Toronto’s Union Station for the train that would take him to Peterborough. But before he could board, his plans changed: Maclean’s informed him that their reporter had been called away to another assignment. “Go ahead and shoot whatever you want,” Parker was told. “When you get back, we’ll see if we can use it.”

Parker shot more than 200 black and white photos during his brief stay in Peterborough. When he returned to Toronto, he handed the negatives over to his editor. The images were both candid and unconventional, and it was obvious to anyone who saw them that Parker had brought a different eye to the task than a news photographer would have done: it’s there in the arrangement of the scenes, in the eye for detail, in the unique composition.

Two weeks later, Parker got another call from Maclean’s. The magazine had no use for the pictures. “You might as well keep them,” they said. Parker filed the negatives away, and there they remained for the next forty-three years, until his friend saved them from the fire. They are presented in Leafs ’65: The Lost Toronto Maple Leafs Photographs for the first time.

Stephen Brunt is a sports columnist for the Globe and Mail.