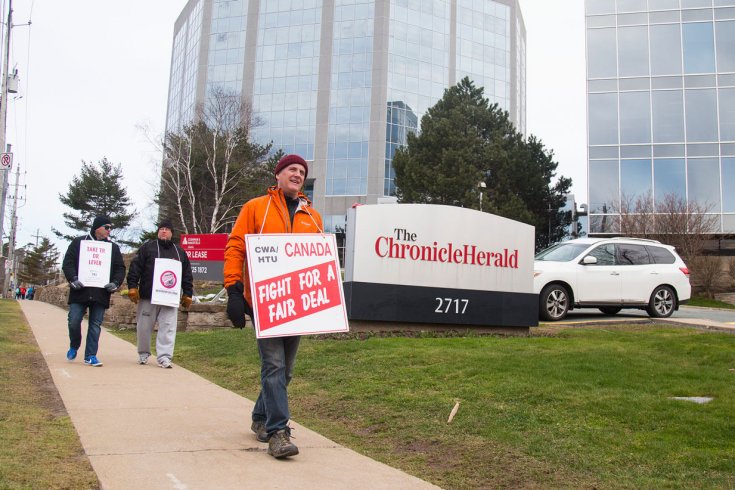 The guy who answers Ingrid’s phone is cheerful and oh-so-eager. He has a British accent and sounds happy to be alive in an up-for-any-adventure, ready-to-take-on-the-world sort of way. It is the morning of his very first day of work at the Halifax Chronicle Herald.

“Ingrid? No, there’s no Ingrid here,” he says, “But why are you calling? Maybe I can help you?”

I’m trying to reach Ingrid Bulmer, president of the Halifax Typographical Union. Bulmer is an award-winning photojournalist who has worked at the Herald for twenty years. On January 23, she led sixty-one employees out of the newsroom in the paper’s first strike. She is the union’s chief spokesperson and recently she’s been all over local media commenting on a Herald story about schoolyard bullying that has been widely denounced as sloppy, unethical, and hurtful.

The bouncy new Herald reporter has never heard of her.

It’s weird times in Halifax. One of Canada’s oldest newspapers is in shreds. The pain is both personal and public. Colleagues who grew up together and worked together for decades are now battling over the scraps of an industry in decline. It is playing out in skirmishes magnified by Facebook and Twitter and, this week, circulated round the world.

The latest is a story that accused Syrian refugee children of bullying Nova Scotia students at a local elementary school. It was based on conversations with three families, but there was no evidence that the reporter talked to anyone at the school to confirm the story. Nor was it clear why it was relevant that the alleged bullies were Syrian, or exactly why a schoolyard bullying episode was news at all. Nevertheless, the story was picked up by outlets like JihadWatch and MadWorldNews as an example of the Muslim menace.

The Herald removed details of the online story the next day. A day after that, the story was removed from the website and replaced by an unsigned explanation that said the story was “incomplete and insufficiently corroborated.”

Newsroom managers won’t talk about what went wrong, and owner Sarah Dennis responds only by email, and only with one standard statement:

“I did apologize to (Halifax Regional School Board Superintendent) Mr. LeRoux for the article. It was not well written or edited. Humans make mistakes. There have been errors in the paper before the union walked off the job and unfortunately there have been errors during the labour disruption and there will be errors after the labour disruption is over.”

But this wasn’t a run-of-the-mill error. It was such a biggie, such a flouting of the basic journalism practices of fairness and verification that a related company went to extraordinary lengths to distance itself from the mistake.

Ed Brouwer is managing director of Pagemasters North America, the Toronto-based outfit that copyedits Canadian titles such as the Toronto Star and the Globe and Mail. I ask him about the rumor that Pagemasters was under contract to the Herald and had edited the Syrian bullying story.

“We didn’t touch it, had nothing to do with it and actually got it in writing from Halifax so that everyone is aware that it was not us,” he says. “We got it from the editor in Halifax because we wanted to make sure everyone was clear that in fact none of that material actually touched Pagemaster.”

So how did this happen?

The union alleges that Dennis is bringing in reporters and editors from outside Nova Scotia who don’t have the training, skills or local knowledge to produce the trustworthy stories that are—or should be—the hallmark of a legacy newspaper.

The cheerful, oblivious Brit who is the Herald’s newest reporter declines to give me his name and puts down the phone when I ask about the Syrian schoolyard story.

Outside his new workplace, ten long-time Herald staffers are picketing in a dull, cold rain. Together, the strikers have 254 years of experience in the Herald newsroom. Almost everyone on this line is over the age of fifty.

Billy Idol’s Rebel Yell is blasting from a boombox wrapped in plastic to keep it dry. Kelly Shiers bounces back and forth across the driveway to the Herald, a big placard bumping her hips as she grooves to the beat, hood up against the rain, hiking boots splashing in the puddles.

Shiers is fifty-two years old and has worked at the paper twenty-eight years. She was in Rwanda for the Herald during the genocide of 1994. She has covered school boards, elections, crime, everything. She also did a stint as the paper’s assignment editor.

“How did it feel to read the Syrian schoolyard story?”

The question is like a slap. It stops her, all motion now gone, her dance abandoned.

“It felt like someone had kicked me in the stomach. I thought this must be a terrible mistake, maybe somebody hacked into the system,” she says.

Everyone on this picket line is convinced that if they had been working on April 8, that story would never have made it into print or online.

“It just doesn’t pass the smell test,” says Randy Jones, a copy editor with thirty-one years at the paper. “I’ve run into stories like this before. It just doesn’t feel right, so you check it again. After thirty years of doing this, you get that gut instinct.”

The union has positioned the strike as about more than jobs and pay; it says it is about “protecting quality journalism,” a slogan that is repeated in press releases, interviews and social media.

Or maybe the strike is about the transition of journalism itself.

The Herald is privately owned, so the state of its books is not public, but the Canadian newspaper industry is in disarray. Revenues have dropped more than 30 percent in the last decade. Even relentlessly prosperous companies like Torstar Inc. are teetering at the edge of investment irrelevancy with a share price of less than $2 and market capitalization of just $135 million.

Meanwhile, digital-first companies are growing: Vice, Huffington Post, and Buzzfeed are hiring, as are small online news outfits across the country. Rogers Communications invested $100 million in Vice Canada in 2014 mostly on the strength of its news and lifestyle programming and has struck a partnership to set up a brand new Canadian channel: Viceland.

Native advertising, the controversial practice of creating ads that are presented in a format similar to editorial, is feeding the Buzzfeed and Vice boom. Many legacy companies are trying to follow that trend—including the Herald.

None of the booming new media companies are unionized. None of them have the structure of newspaper companies, with segregated job duties and multiple checks and balances. And almost none of them have seniority job protection, defined benefit plans, or even defined work hours.

Some worry that the Herald plans to shutter the daily operation and focus on its suite of free community papers, titles that are heavy on features and lifestyle but don’t pretend to do the kind of accountability reporting expected of a daily newspaper. The community papers are also outside the union contract.

Paul Schneidereit is a member of the Herald editorial board who has worked at the paper for thirty-two years. He is also a national director of the Canadian Journalism Association. “There’s a real sadness watching the brand that so many of us have worked decades to try to build, to try to stand for something, stand for credibility and consistency and reliability, to watch that go down the drain because of the clearly inferior product that is coming out. A lot of people are hurt by it. It is personal,” he says.

Despite the rain, despite the long tedious hours walking back and forth, despite missing her job, Shiers is surprisingly upbeat. “We’re taking a stand, but what we’re fighting for is the right thing and it’s worth it,” she says.

It’s clear that Shiers is talking about traditional journalism standards, the right of an audience to be served by reporters and editors who know the difference between effect and affect, who understand how to verify information and why that is important, who put the needs of the public ahead of the needs of owners or advertisers.

“It’s hard but it’s also invigorating,” Shiers says of her strike duty. “My nose runs too much and I get cold and I get wet and I’m probably not so pretty sometimes, but then we dance. This is an important fight and it’s not just about the Chronicle Herald.”

Kelly Toughill (@ktoughill) is an associate professor of journalism at the University of King's College in Halifax.