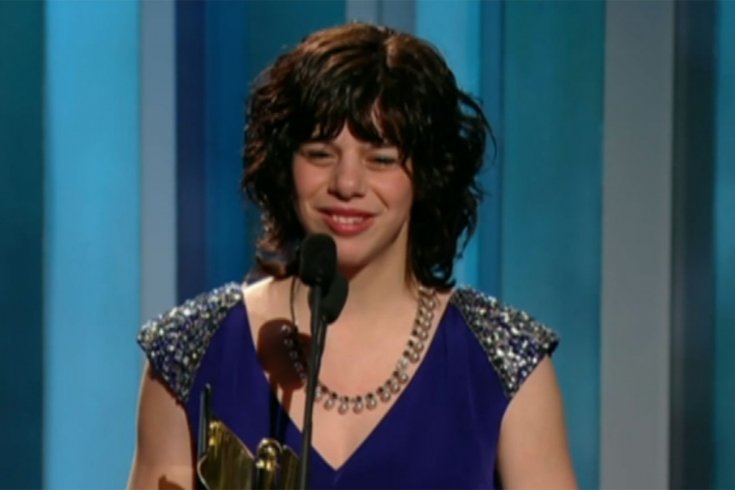 Gabrielle Marion-Rivard accepts her trophy for best actress in a film at the 2014 Canadian Screen Awards.

In David Cronenberg’s 2014 film, Maps to the Stars, a major character is bludgeoned to death with a bulbous statuette. It’s a handy metaphor for the sensory overload of awards season—the multimedia blitz that unofficially commences in September with the Toronto International Film Festival and concludes six months later with the Academy Awards. Maps to the Stars neatly excoriates Hollywood mores while keeping one jaundiced eye on its creator’s home base. The trophy wielded as a murder weapon is a Genie—possibly one of the eight that Cronenberg has won.

It’s appropriate that the Genie figures into a movie as funereal as Maps to the Stars, as it is a posthumous appearance—a sort of “In Memoriam” tribute to an inanimate object. In 2012, the Genies (Canada’s former equivalent to the Oscars) were discontinued and merged with the Geminis (our equivalent to the Emmys) to form the Canadian Screen Awards, a production of the Academy of Canadian Cinema & Television. At a moment when critics are calling television the “new cinema” and broadcasters battle against digital-streaming platforms for living room supremacy, the hybridization of these two awards shows could be seen as some sort of Cronenbergian mutation—long live the new digital flesh! By putting all of Canada’s finest in one place at one time, the CSAs (a two-hour gala of film and television prizes airs this Sunday, March 1) hope to capture the attention of a country besotted by US cultural product; to hand the domestic audience a map to its own stars.

The strategy has had mixed success. In 2013, the first CSAs scored 750,000 viewers; last year, the audience dipped to just over half a million. These numbers represent a mere fraction of the ratings that American programs like the Emmys and especially the Oscars command in Canada (the latter is watched by six million people). As Rebecca Tucker pointed out in the National Post earlier this month, ratings aren’t everything; the impact of live television in the twenty-first century can be felt more acutely on social media, where popular hashtags and trending topics drive viewer interest rather than the other way around. This year the CSAs have probably lined up enough big-name homegrown presenters, including Eugene Levy, Tatiana Maslany, and Kiefer Sutherland, to at least pique the curiosity of Sunday-night viewers and tweeters alike. The real issue is something more difficult to quantify with numbers: how should a Canadian awards show be?

Last year, the CSAs ran with the idea that Canadians are funny. There was plenty of scripted banter between the presenters, and a number of skits in which the host, Martin Short, got to show off his virtuosity. There were tearful speeches by popular winners like Maslany and Gabrielle Marion-Rivard, but the most resonant moment came via Viggo Mortensen, who eloquently introduced Cronenberg’s lifetime achievement award by pointing out that his friend and collaborator had never been nominated for an Oscar.

It was an inversion of the usual dynamic whereby Canadians measure the validity of our artistic output by its acknowledgment abroad. Mortensen seemed to imply that the CSAs (and their earlier incarnation, the Genies) had regularly recognized the brilliance of Cronenberg’s cinema—something they held over their American peers. Until the 1990s, most of Cronenberg’s movies were too small (i.e., independently produced in Canada) to consider alongside the Hollywood products that are routinely nominated for Oscars. Mortensen took the very Canadian conceit of being a big fish in a shallow pond and turned it from something apologetic into a point of pride. The fact that it took an American movie star to etch this perspective is a fine little irony that hopefully didn’t obscure the larger point being made.

The producers of this year’s CSAs hope to eliminate some of the prefab drollery and focus on a broader sense of accomplishment. (Full disclosure: I am doing research for the broadcast, but I have no input on the writing or creative decisions.) Of course, you can only fine-tune a live broadcast so much, and the best awards shows are those spacious enough to accommodate spontaneity (which is what also plays best on Twitter). Whatever the implications of combining film and television awards, whether out of a sense of artistic equivalency or efficiency, the possibility of a Canadian awards show that offers no apology for not being the Oscars is worth rooting for. The key is finding the sweet spot between sentimental soft-focus—the Heritage Minute approach—and the hard sell of hitting the audience over the head with a trophy. Leave the latter to David Cronenberg.