Standoff on South Florissant | The Walrus
Skip to content 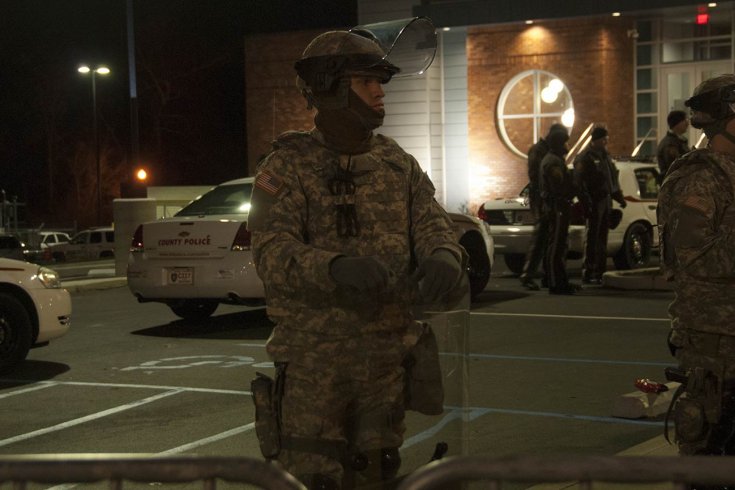 A National Guard soldier stands in front of the Ferguson police station.

When protesters in the streets of Ferguson, Missouri engage in the cry, “you can’t stop the revolution,” they’re being completely serious. In the immediate aftermath of a grand jury decision not to indict local police officer Darren Wilson for killing eighteen-year-old Michael Brown—who was unarmed when the two confronted each other on August 9—a significant number of local residents have decided they must not stop their demonstrations unless something short of a revolutionary change occurs.

The only thing standing in the demonstrators’ way last night, one evening after the announcement of Wilson’s non-indictment, was an unapologetic local police force, armed in riot gear—and backed up by equally imposing 2,200 National Guard personnel, who were summoned by the state’s governor after widespread rioting began on Monday. As similar protests broke out across the country—and in major Canadian cities including Toronto, Ottawa, Calgary, Montreal, and Vancouver—all eyes pointed to Ferguson, particularly on a tense standoff between police and protesters outside the local cop station.

To understand why people in Ferguson have been protesting practically every day since Brown’s killing, and why they are likely not going to stop, consider this: many of them believe that until they establish the right simply to exist in their own streets without fear of police brutality, there can be no moving forward from here.

More than simply keeping the peace, the police last night seemed to be engaged in a turf war with their own residents. At some junctures, law enforcement blocked either side of South Florissant Rd., the site of the police station, so that cars could not approach the scene. Nevertheless, police insisted that protesters could stand in the road, then mobilized their own lines forward to repel demonstrators and, in a couple of cases, arrest them.

This is what it has come to. People are outraged that a young man was shot multiple times by a police officer, and left in a pool of his own blood for hours before being taken away not in an ambulance, but a police vehicle. They are furious that, after months of testimony and evidence, a grand jury failed to indict Wilson on a single charge.

And last night, as it has been for months, the same police force responsible for Brown’s killing occupied itself with telling residents exactly how far they had to remain from the roadway. The expectation for business as usual comes in the context of a well-documented wave of recent police killings across the United States, many of which have failed to produce any criminal consequences for the cops involved.

But hey, don’t block the street.

Johnetta “Netta” Elzie, twenty-five, stood well back of the police line, the sidewalk, and the throng of protesters. She rarely took her eyes off the confrontation. When asked why she was there, she simply replied, “because they keep killing black people.” Elzie said she has been organizing since Brown died. She writes for the Ferguson Protester Newsletter, a daily publication with over 9,000 subscribers.

Elzie pointed out that many see prosecutor Bob McCulloch, who oversaw the grand jury, as an enemy of the black community. “He’s already had a case where police wrongfully killed two black men,” she said of the controversial shootings of Earl Murray and Ronal Beasley in 2000. “McColluch called them two bums—he didn’t care,” she said with an intense gaze.

Although Elzie is well aware that police and military personnel have the weapons and the authority to push protesters around, she is undeterred. “So what are we going to do, back down? I’m not backing down. I’m gonna protest until this shit is done, which is probably gonna be never.”

At a nearby Subway restaurant that has become a hub for protesters and organizers, Jermelle Harrison, twenty-seven, and Orlando Brown, thirty-six, held court with reporters and a friend while eating sandwiches and chips. They discussed the notion that acts of vandalism, including the torching of a pizzeria on Monday night, could derail their cause.

“When the United States goes to war with a country, and innocent kids get killed, you know what that’s called? Collateral damage,” Brown said. “I’m sorry your business got affected, but this is bigger than your business.” Rather than take responsibility for the vandals, Brown said he is protesting out of a sense of duty to his thirteen-year-old son.

“This is not so much black and white, this is wrong and right,” Brown continued, as Harrison cheered on the sermon. “If it was a black cop, we still would be here.” When a foreign journalist asked if Brown would protest in defence of a white victim, Harrison said they did in September, when seventeen-year-old Bryce Masters was tasered into a coma by a police officer in Independence, Missouri.

“As long as there is police brutality, and they’re taking advantage of our rights as citizens…we will be out here,” said Harrison. This kind of conviction, which a great many protesters can articulate as well as exhibit, inspired demonstrations in 170 cities across the United States yesterday.

The police and protesters continued the standoff well into the early morning as a helicopter buzzed overhead and National Guard trucks rolled along South Florissant. The reinforced Ferguson police seemed an immovable object in front of their station. Likewise, protesters across the street stood defiantly, clapping, singing, chanting, and chastising—almost as if after months of devotion and apparent momentum, they expect the police will one day have to back down.