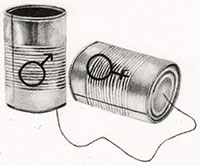 Madame France’s third grade girls have strong feelings about les ognons. They don’t like the look of them; they prefer les oignons. The young ladies, dressed in navy jumpers and white-collared blouses, are willing to be lenient toward entrainement, connaitre, and Aout, but there are limits. A freckled traditionalist named Léa raises her hand and says, “For me, ognon, it looks really weird without the i.”

“It does look weird,” Mme. France admits. “But we don’t say we’re going to eat des waaahhn-yons.” She draws out the offending syllable, and the class laughs.

The École des Ursulines de Québec is the oldest school for girls in North America, a building whose hallways alternate Biblical scenes painted by eighteenth-century nuns with psychedelic meditations on “Respect” and “Empathy” crayoned by eight-year-olds. This Quebec City school is wholly modern, however, when it comes to language. As of September 2010, it is one of the relatively few in the province teaching la nouvelle orthographe (the new spelling), a set of adjustments designed to simplify how French is written. The hope is to make French spelling easier by making it more consistent.

The debate over gender-neutral English pronouns has been simmering since the mid–nineteenth century, when American journalists started clamouring for a one-word alternative to “he or she.” Today the issue goes beyond linguistic shorthand. According to Bobby Noble, a trans activist and professor of gender, sexuality, and women’s studies at York University in Toronto, people need to use language that allows “for the many stopping points between masculinity and femininity.” But what words are we to use? According to a list compiled by the University of Illinois at Urbana-Champaign, Anglo culture has produced dozens of non-gendered pronouns, including “ir” and “iro,” proposed by nineteenth-century linguist Elias Molee; and “ghaH,” the pronoun of choice among the Klingons on Star Trek. Despite the growing popularity of “ze” and “hir” within the transgender community, gender-neutral pronouns have yet to find a place in the vernacular. But for Noble, grammarians’ attempts to systemize the English language miss the point entirely. He encourages his students to identify with a pronoun of their choosing, and he invites them to switch pronouns whenever they see fit. “It’s not just about finding the right word,” he says, “but about opening up the discussion on how we use language.”

While Canada, France, and Belgium all approved the changes in the early 2000s, getting the new spelling into schools is another matter. Quebec’s ministry of education has yet to mandate la nouvelle orthographe, putting the province behind New Brunswick, Nova Scotia, Saskatchewan, and Alberta. This hesitation makes sense: for native speakers, spelling feels like more than a surface matter. “People think that if we touch spelling, we put a second f in boursouflé, it’s an attack on all of French culture,” says Chantal Contant, a linguist who favours purple-glazed hair and teaches at the Université du Québec à Montréal. A bouncy Saint Paul of spelling reform, she has made it her mission to lead the province’s reluctant conversion. “While any eight-year-old Italian can write an irreproachably spelled letter to his grandmother,” she points out in one of her fervent handbooks on the subject, “at fifteen, a francophone is still being tripped up.”

The best method for representing French sounds on paper has been under dispute for as long as French has been written. While such languages as Finnish have a regular and direct grapheme-phoneme correspondence (a always sounds like a, and the sound a is always written as a), this correspondence in French is spotty. The long o sound looks different in the words haut, hôtel, and jumeaux, and étais, était, and étaient sound the same. In the seventeenth century, dictionaries couldn’t even agree on how to spell “dictionary,” so in 1635 Cardinal Richelieu, Louis XIII’s steely chief minister, founded the Académie française and charged it with “purifying” the French language. Over the centuries, the erudite Académie has proposed eight reforms—although the French public has promptly rejected a number of their changes.

La nouvelle orthographe, the latest brainwave, was conceived in 1989 at the behest of Michel Rocard, then the French prime minister. It affects about 5,000 words, and consists of adjustments to four broad areas of orthography, divided into dozens of gloriously pedantic rules and sub-rules designed to root out the “anomalies and absurdities” of the French language. The circumflex accent (as on î) has lost some of its prominence; some single consonants are now doubled, while some double consonants have been singularized; and the inconstant hyphen has been brought to heel. As with earlier reforms, la nouvelle orthographe was consecrated by the Académie, whose forty members for life are referred to as les immortels.

There’s a Sisyphean allure to language reform, with its hope of enlisting rational rules to beat back organic messiness. The past several decades have seen adjustments to Dutch, German, Norwegian, and Portuguese, among others. Even English has flirted with reform: during the 1970s, Australia’s minister of health referred to himself as the “minister of helth.” But as Mme. France’s third grade girls know intuitively, language isn’t a rational enterprise. It’s a haphazard by-product of centuries spent singing ballads, gossiping about the neighbours, raising children, and calling the dog in. No one ever truly fell in love in Esperanto (or if they did, it was a small, geeky wedding). Changing a language feels like changing history.

This explains why Quebec is treading lightly. The ministry accepts both new and old spellings on provincial exams, but leaves the decision of which to teach up to schools, which often leave it up to teachers. Opinion varies widely enough that, even within the same school, some sixth graders RSVP to an événement, and others to an évènement. Some educators are complaining about the ambiguïté, others about the ambigüité. Nervous students are breaking out in both eczéma and exéma. In June, however, France’s trusted Larousse dictionary announced that its 2012 edition would adopt all of the proposed changes; Quebec teachers can’t hold out forever. Contant argues, “The science teacher who hears on the radio that we’ve decoded the human genome doesn’t say to himself, ‘Well, I probably shouldn’t say anything to the students, since it’s not in the 1992 biology textbook on their desks.’ ”

La nouvelle orthographe isn’t a fundamental change to the DNA of the French language; it’s more like a new haircut than a new heart. Eventually, it will grow out and need to be cut again. The task of reforming French will never be finished, because after every reform there’s still a purer version just ahead—an ideal French unencumbered by its inadequate alphabet, its history, or its speakers.

A living language is always changing, but it carries the ghosts of those who once used it to describe their world. The École des Ursulines has a museum attached to its monastery, devoted to the history of the school and the Ursuline order. It displays a document under glass, a transcript in swooning cursive of the canonical examination of Sister Louise-Françoise Blais. The examiner asks, “Were you in any way forced or pushed to become a nun by your parents or any other person? ”

The document is dated October 22, 1824, and the word parents is spelled parens. It looks quaint, touching—perhaps the way oignon will look in 100 years.