Socialism Is Back. Is the NDP Listening? | The Walrus
Skip to content 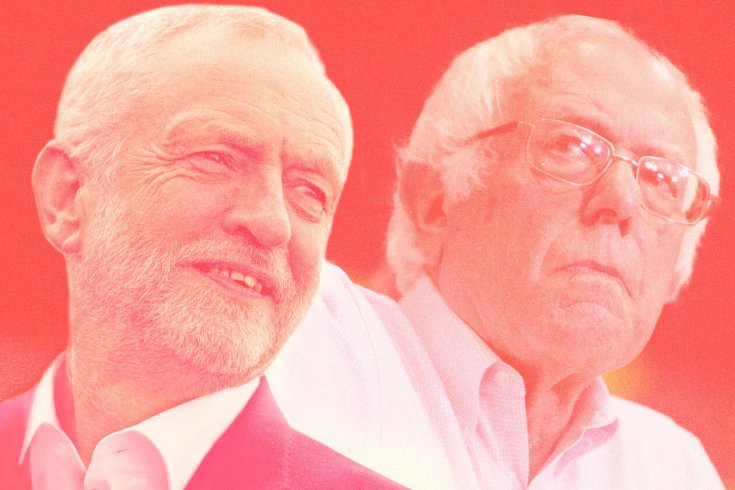 The first 2016 Democratic Presidential debate had just begun when the moderator, CNN’s Anderson Cooper, summoned the spectre that many assumed would devour Senator Bernie Sanders’ candidacy. “You call yourself a democratic socialist,” Cooper said. “How can any kind of socialist win a general election in the United States?”

The question was presented as its own answer: only a politician of truly colossal naiveté would stand on a Las Vegas stage and expound the virtues of Scandinavian-style democratic socialism. Surely, the candidate would have no choice but to backpedal, re-frame his politics as “progressive,” and maybe mumble a few conciliatory words about hardworking American families. However, Sanders seemed to believe that he could win because of his socialism, that all he had to do was explain what his form of socialism meant—an alternative to a “rigged economy” in which “the top one-tenth of one percent own almost as much wealth as the bottom 90 percent.” It meant providing healthcare as a human right, and paid medical and family leave to end the American travesty of separating mothers from their newborn babies. It meant a strategic deployment of Scandinavian solutions, to “learn what they have accomplished for their working people.”

But Cooper was less impressed with the details of Sanders’s politics than he was with the very fact of his self-proclaimed socialism. Cooper concluded his Joseph McCarthy routine by asking if any of the other four candidates on the stage was “not a capitalist.” No hands went up, which was, of course, the point. Sanders, viewers were to understand, was a relic, a political dinosaur whose ideological DNA had somehow been preserved in amber. His platform—free post-secondary education, wealth redistribution, and more regulations for Wall Street—bore the hallmarks of an unregenerate leftist. Had the Berlin Wall not been sledgehammered down, just as Reagan demanded? Had the Soviet Union not collapsed beneath the weight of its own bloody contradictions? Were we seriously debating whether a socialist could win the White House in 2016?

In fairness, Cooper was only channeling the collective wisdom of the entire American political establishment. Indeed, across the West, fewer factions are more ferociously committed to the “death of socialism” narrative than centre-left parties themselves. This was seen in the particular malice with which former British Prime Minister Tony Blair treated Labour party leader Jeremy Corbyn in their recent election. For a Third Way centrist like Blair—who eliminated “common ownership of the means of production” from the Labour constitution in 1995—Corbyn, an unapologetic socialist with plans to nationalize the railway, scrap tuition, and abandon Britain’s nuclear arsenal, represents a stale menu of policies that had been rejected around the world a generation ago. Today’s voters “do not think their challenges can be met by old-fashioned state control as the way to personal or social empowerment,” Blair wrote in the Guardian, “and they realize that a party without a serious deficit-reduction plan is not in these times a serious contender to govern them.”

Over the past few decades, the assumed victory of laissez-faire capitalism over socialistic alternatives has been the sine qua non of Western economic policy. Austerity, de-regulation, de-unionization, trade liberalization, tax cuts—the free-market fundamentalism underlying these policies is not, we are told, a contestable ideological position, but rather economic reality. Anyone who dares challenge the essential wisdom of the market is labeled an irresponsible fantasist, unworthy of the people’s trust. In fact, partly due to Corbyn’s leadership, pollsters predicted a historic victory for the incumbent Conservatives (who were going into the election with a majority), saying that they could see their strongest electoral showing since 1979.

We know how that turned out: significant gains (and political vindication) for Corbyn’s Labour, while Theresa May’s diminished Tories now hobble along with a minority government. This outcome was just the latest instance in which a conservative party in the West managed to snatch a defeat from the jaws of presumptive victory. 2017, widely assumed to be the year in which rightwing nationalism would go viral, has seen electoral defeats for populist parties in Austria (Hofer), Holland (Wilders), and France (La Pen). Kellie Leitch, Canada’s contribution to this pathetic pantheon, never received more than 8 percent of the vote through nine rounds of ballots in the Conservative Party leadership contest.

Far from the predicted ascension of right-wing nationalism, 2017 has seen a generational revival on the left. An increasingly educated electorate is capable of repudiating the atrocities perpetrated in the names of Marx and Lenin while also recognizing that specific, achievable goals—a livable minimum wage or guaranteed annual income, universal healthcare, reduced income inequality—are properly called socialist goals, and that their realization would enable better lives for more people. In Canada, with the NDP leadership race now underway, it seems inevitable that at least one candidate will look at the popularity Corbyn and Sanders were able to garner in a short period and say, Why not here?

The case for a socialist NDP platform finds support in the party’s recent electoral fortunes: when Thomas Mulcair maneuvered the party to the centre in 2015, the NDP lost both 51 seats and a greater percentage of the popular vote than Stephen Harper’s Conservatives (not to mention their Official Opposition status). Yet the victory of an unabashedly socialist platform today is far from certain. Corbyn’s success, many have argued, is inextricable from Theresa May’s failure, while Sanders’ ascendance was grounded in the perception that Hillary Clinton’s priorities lie with preserving an economic order in which working-class Americans had been left behind. In short, the socialist surge was animated by British and American anxieties that are mostly absent in Canada, where the politics of austerity are more muted and social programs are not under comparable threat.

At the same time, there’s no denying that some economic and environmental anxieties transcend borders—particularly among millennials, who are rapidly becoming the largest voting demographic in the West. As the dream of home ownership recedes further into the realm of fantasy, young, urban voters in Canada could be receptive to housing policy akin to Corbyn’s right-to-buy scheme, which would regulate rental markets and guarantee tenants the opportunity to buy their homes at subsidized mortgage rates. At a time when more young Canadians than ever are attending post-secondary education—and when more parents than ever are paying for that education—tuition relief policies, embraced by both Sanders and Corbyn, could also resonate here. And as the Trudeau government approves more pipelines and encourages further tar sands development, space emerges on the left for a more credible environmental policy.

If the NDP has anything to learn from Sanders and Corbyn, however, the lesson must include style as well as substance. Both of these seasoned socialists speak in terms of class-consciousness—even class warfare—that accurately register the stark realities of wealth and income inequality in modern capitalism. Regardless of policy, Sanders and Corbyn have proven the rhetorical efficacy of calling for political “revolution,” of framing the interests of their constituents in direct contrast to those of the “billionaire class,” and the NDP should inject their arguments with similar brio. At a minimum, they must dispense with the stale canard that left-wing parties must accept market-based “realities,” scrub off that unionist stench, get cuddly with corporations, and fight for the scraps of the political centre.

Yes, centrism scored a recent victory in France, where Emmanuel Macron’s En Marche party achieved an absolute majority—though not without the assistance of a communist party that won 20 percent of the popular vote in the first round. But if Canada’s Liberals fail to address anxieties on housing, the economy, and the environment, its Trudeau dynasty could be radically abridged by an NDP that promises to do just that.

The unexpected ascendance of socialist politics is not so much a repudiation of populism as it is another manifestation of the same underlying discontent. That malaise is an effect with multiple causes, including the wholesale “unwinding” (to invoke George Packer’s indispensable book) of entire industries including steel, tobacco, and manufacturing; the long-term erosion of unions, religious institutions, and public schools; increased automation, and the displacement of commodity production by financial capitalism.

But that discontent is also related to long-term structural trends in the rapidly de-industrializing West—“crisis symptoms” which are, in the view of economic sociologist Wolfgang Streeck, now irreversible. These mutually reinforcing trends include a chronic decline in economic growth among OECD countries, the continuous rise of household and governmental debt, and spiking economic inequality measured by both income and wealth. The longer these trends persist, the stronger the desire among lower and middle-class voters for political voices that speak to the chronic injustice of our current arrangements. Whether any party on our political horizon is capable of actually correcting those injustices is, of course, another question entirely.

Nearly thirty years have passed since Francis Fukuyama published his often discussed essay “The End of History?” in which he argued that the West’s “triumph . . . is evident first of all in the total exhaustion of viable systematic alternatives to Western liberalism.” The upshot of Fukuyama’s argument, accepted as axiomatic by all mainstream Western political parties in the intervening span, is that any serious political analysis must accept the death of utopian possibilities: the ideological fantasies of both left and right would be replaced (Fukuyama prophesied) “by economic calculation, the endless solving of technical problems, environmental concerns and the satisfaction of sophisticated consumer demands.”

Today, confronted by a systemic failure of technocratic solutions to capitalism’s contradictions and a corresponding resurgence of both left- and right-wing political alternatives, it has become increasingly obvious that Fukuyama’s idealized vision of Western liberal democracy was itself the utopian possibility. As the unstoppable forces of automation and globalization continue their work of creating jobless voters, and as a growing demographic of educated citizens recognizes the political function of the historical libel against socialism—that is, the upward redistribution of wealth from the poor to the rich—a genuine socialist alternative will appear increasingly viable. Whether the heirs of Tommy Douglas will provide that alternative remains an open question, though one thing is certain: our political future is going to involve a continuing reappraisal of some old ideas.

Correction: an earlier version of this article misstated the number of rounds Kellie Leitch participated in during the Conservative Leadership contest. She was on the ballot for nine rounds, not one. The Walrus regrets the error.

Ira Wells teaches literature and cultural criticism at the University of Toronto. His work has appeared in The New Republic, Los Angeles Review of Books, The Puritan, and elsewhere.