Small Towns Are Dying. Can Immigration Save Them? | The Walrus
Skip to content 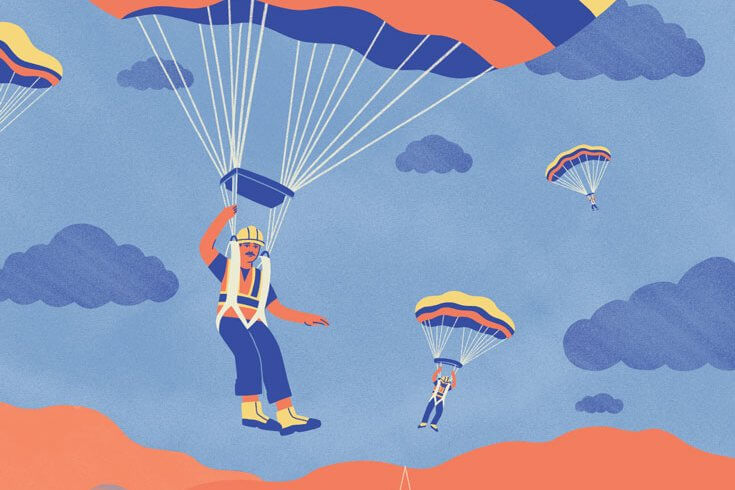 The major attractions of Saint-Gédéon-de-Beauce, an hour-and-a-half drive from Quebec City, could be toured in minutes. There’s the spired church, built in 1911, and, next to it, the town hall, converted from a convent. A stone’s throw away is the heart of the village: Groupe Canam, the largest builder of steel components in North America. Nearly all 2,200 residents of Saint-Gédéon have connections with Canam, and some likely still remember the moment the plant’s foundations were poured in 1960. The owner of Rôtisserie Mom’s, a restaurant located on Canam Boulevard, worked there, as did the husband of Margot Lachance, who runs Saint-Gédéon’s only bed and breakfast. Affixed to the community arena’s facade is the name of Canam president Marcel Dutil; many of his roughly 800 local workers live in town.

Saint-Gédéon, despite its charms, is in decline. Young people are moving to urban centres to pursue their studies, new construction is practically nonexistent, and the only grocery store shuttered two years ago. But, as Saint-Gédéon shrinks, Canam is growing. Thanks to a booming Quebec economy, the company is in desperate need of welders. The labour shortage is also dire for other manufacturers in the surrounding region, a warren of thirty municipalities known as the Beauce. With the area unable to provide workers, companies have launched recruitment missions all over South America and Europe, offering stable incomes, paid vacations, and even free lodging to prospective hires. That’s how Canam, partnering with local professional schools, managed to convince about 100 Colombians to move to town.

But there’s something else notable about Saint-Gédéon: it’s in Maxime Bernier country. In 2015, the entire region, by a huge margin, picked the then Conservative MP—later the People’s Party of Canada leader—who later pledged to radically reduce the country’s immigration levels. In 2018, the Beauce also voted overwhelmingly for François Legault’s nationalist Coalition Avenir Québec, which vowed to cut back the number of immigrants accepted into the province. Like much of the Beauce, foreigners in Saint-Gédéon have been scarce—99 percent of residents speak French at home, and the majority of them are white. But the town is ready for a change, insists mayor Alain Quirion. “It’s more people, more revenues,” he says, referring to the newcomers from Colombia. “That’s how we’ll keep our villages alive.”

In a series of tweets last August, Bernier alleged that excessive diversity would unravel the fabric of Canadian communities, bringing distrust, social conflict, and even violence. But shrinking populations in Atlantic Canada are increasingly seeing immigrants as a net gain, with employers meeting labour demands by recruiting from countries such as the Philippines, Tunisia, Morocco, and Sri Lanka. Towns like Chipman, New Brunswick, and Clare, Nova Scotia, are hoping that, once these foreign workers put down roots, their communities will flourish. Bill Reimer, a professor of sociology at Concordia University who studied rural Canada for thirty years, believes in this strategy. “Rather than circling the wagons and protecting yourself,” he said in 2013, “it’s, ‘Okay, what kind of people do we want to live here? And how can we welcome them and make them want to live here?’”

In rural areas around the world, socioeconomic realities have started to test resurgent xenophobia. Golzow was once a dying German community where one in four voters sided with the far right. But the integration of Syrian migrants has staved off the town’s likely extinction. Italy has seen an escalation of intolerance toward migrants, yet the tiny southern village of Sant’Alessio has rebounded thanks to refugees from Senegal and Niger.

Some of the most dramatic examples of such rejuvenation come from the United States, now in the midst of an anti-immigration wave. Fargo, North Dakota, welcomed 350 refugees, in 2015, to help reverse its population drop and recharge the local economy. Or take Long Island’s Greenport, a town of 2,224 residents. In 2016, the Houston Chronicle noted how profoundly the town had transformed since immigrants from Mexico, Guatemala, and El Salvador arrived in the 1990s. Working in landscaping, housekeeping, and construction, the newcomers “saved this town,” said former mayor Dave Kapell, by attracting young families, festivals, and businesses.

Hélène Latulippe, director general of the Beauce’s economic council, is betting on similarly dramatic results in towns like Saint-Gédéon. Latulippe and her team are trying to find enough workers to help the region’s manufacturers keep pace with a surging economy that, with the retreat of separatism, can now operate relatively free of political risk for the first time in decades. Emploi-Québec forecasts that, over the next four years, 39,200 people will need to enter the workforce in Chaudière-Appalaches—a wider administrative swath that includes the Beauce. Five thousand of those jobs, says Latulippe, will be filled in the Beauce alone. That’s a lot of newcomers settling across a rustic, largely depopulated territory in a short time.

For an idea of what that future could look like, there’s Sainte-Clotilde-de-Beauce, about an hour’s drive from Saint-Gédéon. In 2004, René Matériaux Composites, a local company that produces parts for large vehicles, convinced twenty-five South American families—many from Colombia—to move to the village of about 500 people. In the years that followed, Sainte-Clotilde was celebrated by Quebec media for integrating the newcomers and averting decline. The elementary school, on the brink of closing, was saved, and housing was revived. A headline in Colombian newspaper El Tiempo, soon after the families arrived, summed up the mood: “Colombians Resurrected Sainte-Clotilde.”

But Éva Lopez, who shepherded the deal that brought the families to Sainte-Clotilde, urges caution. Lopez, a Colombian immigrant, directs the Intégration Communautaire Des Immigrants, an organization based in Thetford Mines, Quebec, that helps newcomers adapt. She says the belief that a group of workers will magically resolve an economic crisis is an expression of wishful thinking at best; at worst, it sets immigrants up to suffer the backlash if circumstances don’t improve. “When we label an immigrant as a saviour, we provide them with very tricky powers,” she says. The term itself—“saviour”—masks the reality that a newcomer’s relationship with their town is transactional: expertise is shared and money is exchanged. It’s also temporary, tied to a short-term work permit. Most workers leave after two years.

Last year, 1,365 Quebec workers transitioned from the federal Temporary Foreign Worker Program to permanent residency, which allows someone to live, work, or study anywhere in the country. That represents only about 14 percent of the total number of temporary foreign workers who were in the province that year. According to a government spokesperson, most workers “do not apply for permanent residence and/or aren’t interested in becoming permanent residents.” Poor living conditions and not feeling welcomed might be reasons why. “People think they’re going to Canada for life, but that’s not the objective of the program,” Lopez says. Instead, she describes a system in which contracts are tied to a single employer—this leaves foreigners with few protections. In one case, reported by Le Devoir in 2018, a foreign worker recruited from abroad as a truck driver was instead given other tasks, including cleaning his employer’s barn. When the worker complained, he was dismissed. In another case, a Quebecois worker came to the aid of Latin-American coworkers, who didn’t speak French, when their boss abruptly went on vacation, leaving them without food or a means of transportation.

For Latulippe, what Canam has done to attract help is incredible: “A company that starts buying homes for employees—can you believe it?” But the system puts the power almost entirely in the company’s hands. What if, as happened in another Beauce town, the newcomers are sacked a few months into their jobs?

Lopez is convinced that immigration can turn around many of Quebec’s struggling regions, but she argues it will require more than simply dropping foreigners into a town and assuming the story will end happily for all. The much-celebrated Sainte-Clotilde workers, Lopez claims, had been given apartments so mouldy that they found mushrooms growing out of walls. And, while towns are increasingly seeing the benefits of immigration, certain biases may be hard to leave behind.

A recent report by Carrefour Jeunesse-Emploi de Beauce-Sud—the result of focus-group conversations with locals and newcomers—is blunt in its assessment of the region’s readiness to integrate foreigners. “Even if some tenants are open to cultural diversity, [landlords] are reluctant to rent to immigrants, fearing that they won’t pay their rent, or that they will get the apartment dirty or vandalize it,” it says.

It remains to be seen how well Saint-Gédéon is prepared. The newcomers have already started arriving and have been spotted at Sunday mass. Margot Lachance’s neighbour chauffeurs some of them to a grocery store out of town. Christian Mauricio Garcia Tejada said that, while he is adapting, he misses his family and resorts to using hand gestures to communicate. Convincing someone to cross the globe to greener pastures is, in some ways, the easy part. The bigger challenge is getting towns to see the importance of easing a newcomer’s transition—finding suitable housing, helping them learn French, making them feel at home. “I’m convinced regionalized immigration is an incredible development opportunity,” Lopez says. “But it can’t be done in any way. We’re talking about people, not livestock.”

Étienne Lajoie has written for Maisonneuve and The Athletic Ink. He is the former Chawkers Fellow at The Walrus.
Vivian Rosas

Vivian Rosas is a Toronto-based Latinx illustrator and designer. Selected clients include Today's Parent, Lenny Letter, and the Globe and Mail.