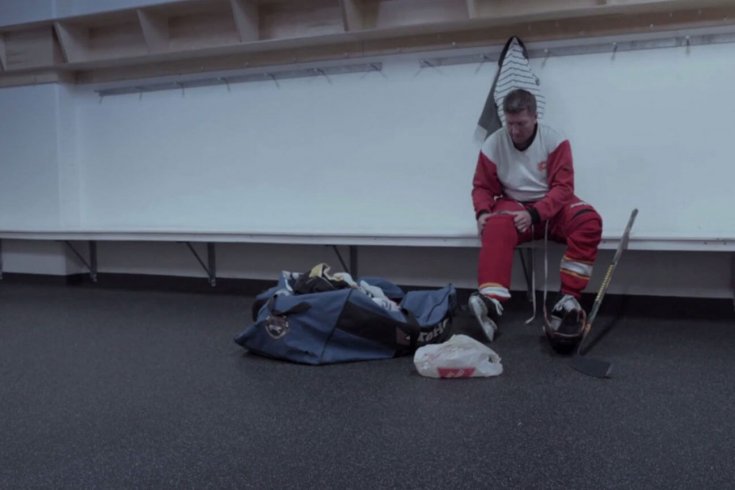 And yet, what a platform we have to make a difference.

There is a moment during the documentary Swift Current when Sheldon Kennedy talks about fear and nightmares. His sentiments, spoken plainly, will ring true to any survivor of sexual violence. They convey the idea that it’s not the so much the act itself that haunts him today, but that near-constant expectation that something, someone, will hurt him at any moment.

“The anticipation of when they’re going to touch you,” he says, his eyes looking down and away from the camera. “The fear of somebody in your room. The fear of feeling unsafe. The fear of them getting you, even though you’re in a safe place.”

Kennedy, born in Manitoba, played right wing for the NHL’s Detroit Red Wings, Boston Bruins, and Calgary Flames from 1989 to 1999. In 1996, he and another unnamed player came forward with complaints of sexual abuse they suffered for nine years at the hands of minor-league hockey coach Graham James.

That November, James—a former Hockey News “Man of the Year”—was charged with sexual assault. Fellow players and fans lauded Kennedy for his bravery. Kennedy went on to become a noted leader in combatting childhood sexual abuse: among other things, in 1998 he did an inline skate across Canada to raise awareness about the issue, and in 2004 he co-founded Respect Group, an organization dedicated to “prevention of abuse, bullying, and harassment.” Kennedy wrote (with James Grainger) the 2011 memoir Why I Didn’t Say Anything, and last year was even awarded the prestigious Order of Canada for “courageous leadership in raising awareness of childhood sexual abuse.”

But that tidy synopsis of events doesn’t reveal the lasting mark trauma has made on Kennedy’s psyche, and how healing is often a messy, difficult, exhausting process that can span a lifetime. Swift Current, directed by Joshua Rofé, looks to unravel that complexity for viewers, shedding necessary light on the stigma and shame that prevents victims from getting the help they need to survive. Kennedy has spent a great deal of time and effort on his recovery and mental well-being. In his own words, he doesn’t let trauma run his life anymore—far from the young man who thought no one would believe him because he was portrayed in the media as an “out-of-control, drunk, wild, bad kid.”

“I’ve had to practice acceptance,” Kennedy tells me over the phone from Calgary. “I believed that I didn’t deserve to live, and now people are calling me a hero.”

When Rofé initially approached Kennedy and his Respect Group partner Wayne McNeil three years ago about making the documentary, the pair were reluctant. They didn’t just want to make another story just about Sheldon Kennedy—that had been done before—but after a few months of discussion they became engaged and excited about what they thought the project could accomplish, specifically in painting a vital picture of the long-term damage that follows sexual abuse. With Swift Current, they were driven to create a high-quality educational piece and teaching tool, one that not only does real justice to the issue, but leaves people with hope.

“There is a way [back] from the brink, when a lot of times people don’t feel like there is,” Kennedy tells me. “The impact of this crime is invisible. So how do we make it visible? We make it visible by connecting the dots, and telling a story.”

What is most valuable about the story Kennedy tells within the documentary, which airs on Global TV this Saturday, is how honestly it depicts the raw ugliness of recovery. With his struggles with relationships, alcohol, drugs, self-harm, and the law, Kennedy is not the cookie-cutter hero that we so often demand of high-profile survivors, but instead the authentic one we actually need. Our populist narrative of sexual assault is that a victim comes forward, justice is served, the attacker is punished, everything is neatly tied up, and we move on. But Kennedy readily disputes that fantasy, candidly highlighting the self-hatred and self-abuse that long followed his initial disclosure.

“I wanted to be as clear and precise and honest about the journey as I could. And make it understandable for the viewer,” he says.

What Swift Current reveals is that Kennedy’s true bravery exists not only in his willingness to name his abuser, but in his willingness to discuss his own battle in the hope that it will help others. Near the tail end of that inline skate across the country, a journey on which countless strangers disclosed their own abuse, Kennedy crashed a Hummer in Edmonton after drinking eight beers. (“During the roller blade . . . I thought I had to fix everybody and help everybody. I didn’t realize my job is to listen and get them help if they need help.”) Unable to sleep without nightmares for two decades, by 2004 Kennedy had hit rock bottom, weighing only 135 pounds and securing himself in the furnace room of his ranch house with a loaded shotgun and a bag of cocaine. In desperation he called a friend who connected him with the NHLPA’s substance-abuse program, and he’s been sober ever since.

“The difficult part for me was watching rough cuts of the film for the first time,” Kennedy tells me. “Yes I was abused as a kid, but then I spent a large part of my life living a certain way, because of the abuse, that hurt other people. We can never forget about that. I can’t forget about that. Because I was running from what happened to me, I’ve hurt people along the way, as far as my drinking and drugging and not showing up.”

After talking to Kennedy, I spoke with another high-profile athlete and survivor, R. A. Dickey, the Toronto Blue Jays pitcher who disclosed his own history of childhood sexual abuse at the hands of a trusted babysitter in the 2012 memoir Wherever I Wind Up. The knuckleballer shared his own thoughts on Kennedy’s story and influence. “My first feeling of connectivity to Sheldon and his narrative is how you come out, and you let the world know, and the struggle after that is very real,” Dickey told me. “I think the very first question any professional should ask any victim of sexual trauma, or sexual abuse, or child abuse is—because it’s a certainty—‘How are you medicating?’ That should be counseling 101. How are they medicating, how are they numbing that trauma.”

Dickey added that it’s very difficult for people to understand that the overall experience doesn’t end at victimization. His thoughts on the lengthy realities of recovery are very much mirrored by Kennedy, who speaks openly with me about “un-prescribed medicine,” “finding ways to shut the head off,” and “escaping the way we feel.” Kennedy, like Dickey, strongly believes that addiction, self-harm, and failed relationships shouldn’t be treated as a stand-alone issues in the wake of trauma, and there’s a necessity for understanding their near-inevitable place in the aftermath of abuse.

“The cutting, the drug abuse, the alcohol, the pornography—whatever your prescription is—all of those are symptomatic,” is how Dickey explained it. “Those are symptoms of the core issue which is this recurring wound that never goes away no matter what work you do. The people who do the deepest work understand that you deal with it every day. I really connect with that part of (Kennedy’s) story.”

One of the most compelling parts of Swift Current is Kennedy’s generous interactions with the younger abuse survivors featured in the film. He speaks to them with authority, candor, and compassion, but he’s also uniquely human and natural in his delivery. In revealing his fallibility, he gives other survivors permission to forgive themselves for the painful symptoms of the harm that has been done to them, and the understanding that what they’re feeling—however extreme—is a normal part of their circumstances.

“What courage he is exhibiting by being so raw about the things that have happened to him,” said Dickey of Kennedy. “You know and I know that when he was (skating) across Canada he had such hope. I mean there were moments that probably motivated him to keep going that were very difficult. You’re always walking this tightrope. You’re always on the razor’s edge.”

The present hope, of course, lies in Kennedy’s continued success despite of what he’s endured. In addition to Respect Group, 115 people currently work at Calgary’s Sheldon Kennedy Child Advocacy Centre, which not only performs 125 abuse investigations a month, but offers mental health services, court preparation, and education. Kennedy is a tireless advocate of trauma-informed training, and thanks to his efforts, Hockey Canada has become an international leader in education about abuse and harassment. Prevention training is now mandatory for all hockey coaches in Canada.

“My constant personal recovery is more difficult than making the film,” Kennedy says about Swift Current. “I don’t know about closure, but I feel confident in the fact that we’ve (made something) that’s solution focused, and that’s going to help people understand what it takes to get your life back.”