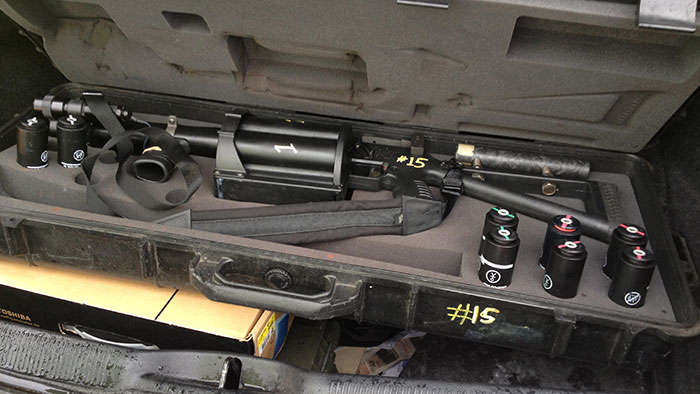 In any discussion about the way the police deal with emotionally disturbed people, it’s difficult to ignore the underlying reality that our society has criminalized some forms of mental illness. And with that criminalization comes the clanking hardware of policing: handcuffs, restraints, batons, pepper spray, firearms.

And other weapons. Shortly after the 2012 shooting death of twenty-nine-year-old Michael Eligon, detailed here (“Stand Down,” The Walrus, July/August 2014), Toronto Police chief Bill Blair called for a public debate about allowing more officers to carry tasers. He later requested $386,000 to equip 184 additional front line cops with these devices, according to the Toronto Star. Peter Rosenthal, the lawyer who represented Eligon’s family at the coroner’s inquest into his death, strongly opposed the move, asserting that tasers are dangerous and discourage police officers from using more peaceful techniques to deal with disturbed persons.

The issue of how Toronto Police use force on people with mental illnesses is currently the subject of an internal inquiry by former Supreme Court justice Frank Iacobucci. Blair announced the appointment last August in the wake of the shooting of eighteen-year-old Sammy Yatim on a Toronto streetcar.

The question of when police should use weapons on this population is central to Iacobucci’s review. Law enforcement agencies in Ontario train officers to rely on the so-called “use-of-force wheel” to guide their tactical responses to highly fluid emergency situations. Taser proponents argue that “directed-energy weapons” will subdue an individual but won’t cause lasting damage; police officers are often tasered as part of their training.

But mental health experts point out that being tasered can exacerbate the psychological trauma of a troubled person. “Tasers can cause extreme distress so to use them on people who are experiencing a mental health crisis, and already displaying signs of distress, can make things even more traumatic,” according to a recent post on Mental Health Cop, a blog maintained by British police inspector Michael Brown, who has been actively engaged in a national debate over policing and mental health in the UK. Other studies, such as this one done in New Zealand, show that tasers are more than twice as likely to be used when police respond to mental health emergencies as compared to criminal incidents. The Canadian Mental Health Association (Ontario) also has long-standing concerns about tasers.

But in some extreme cases, police may have no choice but to reach for a weapon when dealing with someone in an aggressive psychotic state who may be armed. In Memphis, I learned, the Crisis Intervention Team officers, who have special training to deal with emotionally disturbed people, rely on a weapon that doesn’t appear to be part of the TPS arsenal. They are all equipped with an SL6 Launcher, a so-called “less lethal” weapon that looks like a bazooka and fires pill-bottle sized plugs made of gel or plastic.

In appearance, the gun is nothing if not menacing, in an almost cartoonish way, and the mere sight of it can jolt a delusional person back to reality. “Just by looking at it, the appearance will get people to comply with you for the most part,” Officer Tamara Bush, the assistant CIT coordinator on the Memphis PD told me.

She related a remarkable story about a recent incident. Police were called to respond to a man with a shotgun, wandering angrily around in the parking lot of a semi-abandoned mall. There was a gas station across the street, and a Walgreen’s pharmacy nearby.

There are lots of recent veterans in the Memphis area, which means there are plenty of physically fit men with post-traumatic stress disorder and a working knowledge of how to use sophisticated weapons. As soon as the 911 call came in, the dispatchers sent a CIT team as first responders, and Officer Bush arrived moments later, having been briefed over the radio as she sped to the scene.

When she arrived, she grabbed the SL6 from her trunk and took cover behind the squad car.

“Sir,” Bush called out through a loudspeaker, “put down the weapon.

“The guy,” she recalled to me, “turned and racked [the shotgun], and that was it.”

From her training, she knew she wasn’t going to ask him twice: there were bystanders in the mall, and the stores were open. “When he didn’t comply, it wasn’t shoot to kill him. It was shoot to get him to comply.”

Bush shot the man with one of the SL6’s red plugs (the batons, as they’re known, are colour coded according to the consistency of the gel). It knocked him to the ground, causing him to drop his shotgun. Bush’s colleagues dashed over, restrained the man, and grabbed the weapon. “You could tell he was kind of out of it,” she said. “[The gel plug] left an unpleasant mark. But better a mark than a bullet hole.”

Front line TPS officers are equipped with pepper spray, plastic batons, and other devices, like steel flashlights, that can be used to subdue an aggressive person. Other agencies, like the Vancouver PD, also have access to beanbag guns, which fire small sacks and are also considered non-lethal. It’s not clear, however, whether the TPS has ever examined the potential for using “less lethal” weapons such as the SL6 in dealing with emotionally disturbed people who pose a danger to themselves or others and who won’t respond to verbal de-escalation techniques.