Same Vaccine, Different Effects: Why Women Are Feeling Worse after the Jab | The Walrus
Skip to content

In April, as I sat in a chair waiting for my COVID-19 jab, I felt like I was preparing to go on a first date with a long-time crush. I had anxiously waited for months, lusting over the vaccine, until it was my turn to get the shot.

I felt a wave of relief as soon as the needle entered my arm. It seemed like a first step toward normalcy after a long, draining year. I assumed I’d feel fine—my partner had gotten his shot the day before and had no side effects save for a sore arm—so I planned to go on a bike ride the following morning.

Instead, I woke up feeling awful. I had a splitting headache and was completely exhausted; my body felt heavy and my muscles ached. When the symptoms didn’t go away after five days, I was concerned enough to visit my doctor. She explained that my immune system could have essentially overreacted and mounted a very strong response. The COVID-19 vaccines work by teaching the body’s immune system how to fight the real deal should it come into contact with the virus in the wild. Side effects can be part of this process, but I hadn’t expected them to be this brutal.

“It can happen,” my doctor said of my robust response—and more often to females, especially those of child-bearing age. Even though I felt incredibly grateful to have gotten the vaccine, I did feel a bit cheated. If side effects were more common in women, why hadn’t anyone warned me?

It turns out that there are numerous biological differences that influence how vaccines and drugs work on people of different sexes. Nicole Woitowich is a research assistant professor of medical social sciences at Northwestern University’s Feinberg School of Medicine, and her work focuses on the intersections of sex and gender in medical research and practice. She points out that, when it comes to understanding the variations in immune responses, researchers should be looking at sex hormones. (She adds that it’s important to distinguish between sex and gender, which are not mutually exclusive.)

Estrogen, for instance, influences the activation of B and T cells, which contribute to an immune response. Some research suggests that testosterone, on the other hand, can have an immunosuppressive effect, which may help explain why my partner hardly experienced any side effects.

There are also genetic factors at play. In the womb, female development starts with two long strings of X chromosomes, the structures that contain the genes responsible for everything from hair colour to disease susceptibility. Since both X chromosomes have the same genes, there’s no need for both to be active at the same time. “One of these strings is crumpled into a ball and is not functional while the other string remains stretched out and functional,” says Susan Kovats, a member of the Arthritis and Clinical Immunology Program at the Oklahoma Medical Research Foundation. But some genes escape this inactivation process—including ones that make up the immune system. This means that females can have double the amount of certain immune response–related genes, which may cause the body’s defence mechanisms to overreact to things like vaccines.

For years, these types of biological differences have been largely ignored during clinical research, leaving a gap in our understanding of how drugs and vaccines work on different sexes. Despite the fact that females still have nearly double the risk of developing adverse drug reactions, many of today’s trials—including those conducted for the COVID-19 vaccine—continue to overlook crucial data. The pandemic may have served to unmask some of the inequalities that have existed in medicine for decades, but if researchers don’t start adapting their trials with diversity in mind, those inequalities will persist for years to come.

It wasn’t until 1993 that the US National Institutes of Health (NIH) was required to include women and people of colour in government-funded clinical research studies. In the decades prior, scientists in largely male-dominated industries considered middle-aged white males to be the ideal test subjects on the grounds that findings in this group could supposedly be generalized to the entire population. The result was a disregard for marginalized peoples and a void in understanding of the biological differences across the sexes. Women, specifically, were excluded out of concern for fetus health should they get pregnant during the trial or later on.

“If you look at who has really led the scientific and medical workforce for many years, it’s been a lot of white men,” says Woitowich. “So what’s happened is that the biomedical research enterprise—which really is this pipeline of developing therapeutics and treatments for diseases—has relied heavily on our understanding of the male sex, from the discovery of drugs to the initial testing in animals to bringing that into the human model.”

Health Canada didn’t bring its practices in line with those of the NIH until 1997, when it released its Inclusion of Women in Clinical Trials during Drug Development policy, which requires companies to use balanced representation of the sexes in their research. That policy has since evolved to account for other identity factors, such as age, education, language, geography, culture, and income. Meanwhile, the NIH now requires the consideration of sex as a biological variable in its studies on animals and humans. But there’s an outstanding flaw: despite conducting more inclusive studies, many researchers still aren’t analyzing their findings by sex or gender. Instead, they get anonymized and mixed together into one giant data soup. “If we are not taking the data and looking at it separately,” Woitowich says, “we’re not going to be able to understand how drugs might affect men and women differently.”

This sort of scientific ignorance has consequences. Between 1997 and 2000, eight of the ten drugs that had their US Food and Drug Administration approval withdrawn caused more harmful side effects in women than in men. And, in 2013, the FDA recommended that the dose of Ambien and other sleep-aid medications be lowered for women after some began experiencing next-day lingering drowsiness that was reported to have caused car accidents. When researchers collected new data, it showed that women metabolize the drug more slowly. The New York Times later reported that, eight hours after taking Ambien, an estimated 10 to 15 percent of women (compared to 3 percent of men) still had enough of the drug in their blood to impair driving.

When the initial clinical trial data was reported for COVID-19 vaccines, Woitowich noticed the same crucial error. “I was looking to see, Did they analyze their data by sex? And, overwhelmingly, the answer was no,” she says.

If researchers didn’t break down side effects by sex at first, it didn’t take long for people to notice differences. According to a report from the US Centers for Disease Control and Prevention, which analyzed data from December 2020 to January 2021, 79 percent of side effects reported after the Pfizer-BioNTech and Moderna vaccines came from women—even though women made up only 61 percent of the vaccinated population. Women have also accounted for the bulk of rare allergic reactions to mRNA vaccines.

None of these findings came as a surprise to Woitowich, who points out that women can also have stronger immune responses to the flu vaccine. It’s important to note that a more robust reaction is not necessarily a bad thing. “It’s actually an evolutionary mechanism to protect our offspring,” says Woitowich. The fact that you feel bad may simply mean it’s working.

For pregnant and breastfeeding women, however, there was virtually no COVID-19 vaccine trial data at all. Researchers are still hesitant to conduct studies on this demographic, which meant most of them were left out of early vaccine trials altogether. Both Canada’s National Advisory Committee on Immunization and the Ontario Ministry of Health encouraged pregnant people to get the vaccine, causing concern and confusion when, in January, the World Health Organization recommended against it. Like the WHO, provincial health officials had previously said that pregnant people should not get the shot even though research has found that expectant parents with COVID-19 are at increased risk of hospitalization. “Pregnant women get sick and sick women get pregnant,” says Woitowich. “We need to have treatments available for these women.”

COVID-19 has sparked conversations around medical research, access to health care, and the power of science on a scale unlike any other in recent history, but some experts have warned that we’re entering an uncharted era of pandemics: this isn’t the first, and it likely won’t be the last. There is always going to be a need for new drugs, new vaccines, and new medical interventions. Conducting research with difference in mind is key to ensuring the best health outcomes for everyone.

Eleanor Fish, a professor of immunology at the University of Toronto, argues that dosage should be considered in all drug trials—perhaps even with the COVID-19 vaccine—which could lower the chances of adverse reactions. “[If we] evaluate what dose of vaccine gives the same protective effect in females that is noted in males,” she wrote in an email, “it is likely that one can reduce the dose administered for females.”

Because females can often get the same effect as males from lower drug dosage—due, in part, to differences in body size and composition—some suspect that they might be able to acquire the same level of vaccine protection with a lower dose. Researchers at the Johns Hopkins Bloomberg School of Public Health have also proposed that flu shots “should be matched to an individual’s biological sex.”

While significant advancements have been made since the days of predominantly male testing, the scientific community should be trying to conduct research that goes a step beyond breaking down sex differences. Woitowich says that members of sexual and gender minorities often have different determinants of health, and we should be finding ways to improve and tailor health care. Research shows that members of the LGBTQ2+ community experience worse health outcomes than the rest of the population and are at a higher risk for mental illness. “Sexual and gender minority health populations have been minoritized and understudied and kind of erased from our understanding of health and disease,” she says.

As Woitowich puts it, if we’re not asking the right questions at the onset of designing experiments, “that’s poor science, quite frankly.”

Natalie Vineberg is a designer at The Washington Post, and a former designer for The Walrus. 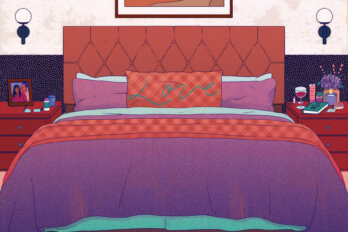