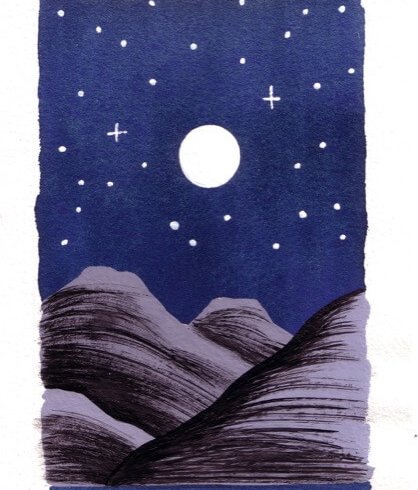 I was nineteen and I lived in Montreal. I was in a horrible relationship with a boy named Leroy. He would cheat on me and be mean to me in every possible way. I prayed that I would have the strength to leave him, but I never did.

I was almost at the end of my first year at McGill University when I met another boy on the school steps. He was an American student. We hung around together for the last two weeks of school, and then he told me he was going back to New Mexico. He said that I should come and spend the summer with him. He gave me the address on a piece of paper.

Then he kissed me, and the kiss was like spinach to Popeye. I was suddenly filled with the determination to change my life. The only way to get away from my mean Canadian boyfriend, I decided, was to flee to the American Southwest.

I told my dad about my great escape plan, and he bought me a Greyhound bus ticket to New Mexico. He’d been begging me to leave Leroy for years. I had saved up $100 from working at a restaurant. I went to the bank and exchanged it for $80 American currency. That would be enough to feed myself over the three-day bus ride and keep me going until I got work in New Mexico.

I packed up everything I owned, which was almost nothing, into a duffel bag. I kissed my roommates adieu and walked to the bus station. I was so excited. It was the first time I was going anyplace on my own. I was off to have the great American Experience. I felt like Jack Kerouac and Calamity Jane, although I was probably closer to Kermit the Frog.

When the bus reached St. Louis, I went to use the pay phone at the back of the station to call my dad. As I took out my wallet to find change, two men came up behind me and shoved me into the restroom. One of them banged my head against the wall and yanked my wallet from my hand. Then they ran out before I could figure out what had happened. I was so sad. It was all the money that I had had in the world.

A few minutes later, I was sitting in a little office with the bus driver and a police officer. Some other people who worked at the bus station came into the office to take a look at me.

“A Canadian,” they kept saying.

A woman who worked at the canteen shook her head, as if I was a three-year-old that a drunken mother had let play outside unsupervised.

“What is a wee Canadian doing here all by herself? ” she asked. “That ain’t right.”

They treated me like I was innocent as freshly driven snow. Because I was from Canada, they seemed to think that I had never been exposed to riff-raff. I was like the dodo birds that lacked natural predators and so stood meekly as Europeans clubbed them to death. Listening to too much Anne Murray had made me soft.

“Don’t you have a boyfriend to travel around wid you? ” the bus driver asked. “If you was an American, you’d have a big-assed boyfriend. He’d carry around a baseball bat and BOOM, he’d a popped off the heads of them thieves. An American man would’ve never let that happen to you.”

“Yeah, what’s your Canadian boyfriend doing up there? ” the cop said, grinning. “Building himself an igloo. There’s a time and place for building igloos, yes sir.”

“There’s a time and a place for peacekeeping,” said a janitor, leaning on his mop.

A man with an iguana on his shoulder came into the office. He was holding my wallet. He had found it tossed on the floor by the entrance of the bus station. I opened it up. All that was left was a $5 Canadian bill that I hadn’t changed into American money.

Everyone in the office laughed.

“Well, at least you can buy yourself Park Place wid that,” the bus driver said. “Come on, sweetie, let’s get back on the bus.”

All the other passengers were in their seats waiting for us. I walked back to my seat with tears in my eyes, having no idea how I was supposed to eat for the next two days.

Then the bus driver picked up the loudspeaker.

“Now listen here,” the bus driver said. “This poor sweet little Canadian came down to this country to visit us. To come and see what America is all about. And we go and mug her in the bathroom. She’s going to go back and tell every single Canadian that we are animals. Now I am passing around my hat. I am putting $5 in it. I suggest that all of you do the same. And then she will know that Americans can also be generous.”

The bus driver passed his hat around the bus and almost everyone put money in it. When it came back to me, I had $75.

That turned out to be one of the best summers of my life. I have one photograph of me in New Mexico. In the picture I’m grinning wildly and look only about sixteen years old. I look as innocent as freshly driven snow.

Heather O’Neill published her second novel, The Girl Who Was Saturday Night, in April 2014.
Seth