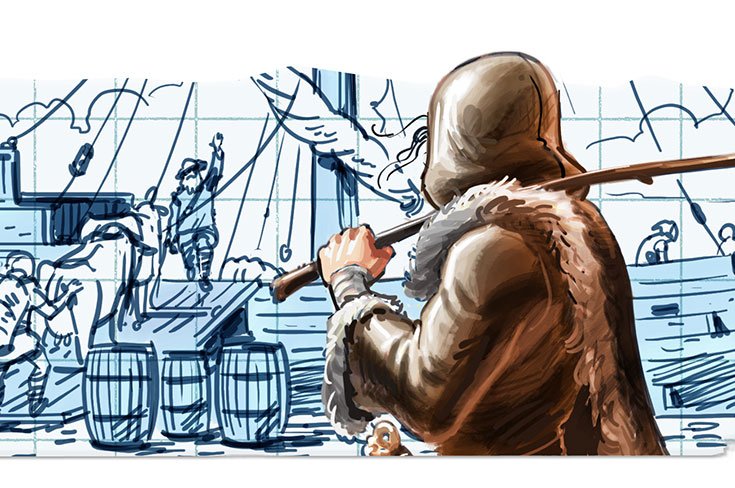 “Aren’t you worried about insurance? Or being stabbed? ” The driver glances at us as we pull onto the highway and laughs. Ross is a titan of a man: six foot eight, broad shoulders, overhang gut. “I ain’t worried,” he answers. “Look at the size of me, f’ Chrissake.”

The lights of Sicamous, British Columbia, wink out in the side mirrors as we accelerate between forested hills. We are heading east in the cab of an eighteen-wheeler, a trailer of lowing cattle in tow, and we’re hoping to cross the Rockies with just our thumbs and the good grace of a few knights of the road. It’s a route and a means once well plied.

“Ass or cash, nobody rides for free.” We’ve already seen this mantra taped to the dashboard of our ride from Vancouver. We have a couple of emergency twenties to offer in place of our asses if it comes to that, but for now we pay with another valued commodity—conversation.

Ross’s truck is part vehicle, part office, part home. His low-slung seat lacks air suspension, marking him as a cattle trucker. “Don’t like air seats,” he says. “Want to feel the road. Got to feel the cows.” As if on cue, the rig shifts slightly to the right, and then back. “There you go.” He’s keen to get back to his wife and two young boys, so we drive fast, engine whining up mountain roads, Jake brakes blatting down them. The night and the road pass as the cows and conversation shift.

Despite his nomadic job, Ross is firmly rooted, a man of the basics—family and the land. For us, cows are hamburger, but Ross sees the blood and the shit of it. He explains how to artificially inseminate them, how to care for them, and how to kill them as painlessly as possible. He leaves us in High River, Alberta, after we help unload his cattle into a maze of wooden gates and pens.

We sleep one night on terra firma, then in the morning turn homeward. It’s the Monday of a long weekend; the warehouses in Vancouver are closed. Nothing’s moving. We end up stranded at a Flying J in Calgary for ten hours. The diner is a halfway world of low lights and coffee refills, where time passes differently. The waitresses are no-nonsense women, ready with hot food and open ears—surrogate wives for the men behind the wheel.

As the sun breaks the horizon, forty rigs lie in the lot outside, some rumbling, some quiet—windshields fogged with the heat and breath of waking men. We leave the warmth of the diner to knock on windows and offer our clipped lines: “Hey, bud, we’re headin’ west, lookin’ for a lift. You goin’ that way? ” The drivers are wary and terse. After numerous rejections, a young guy named Jay takes us on. His cab is filthy: fast-food garbage, musty blankets, the smell of man. A Playboy bunny flag is pinned behind the seats. “Good ol’ Hef,” Jay says. “Patron saint of truckers ’n fuckers.”

Jay is heading back over the mountains and south through central BC to deliver a pallet of plants in Oliver, and then on to Vancouver. “Look at that!” he says, as we pass a speed trap. “Tricky friggin’ cops.” He picks up his CB radio. “Eastbound, you got a bear trap there in the north lane there. A real nasty one, just sittin’ right where the road narrows. Watch your speed there eastbound.” The CB, or citizens’ band, is just that—a tool for banter or for warning others of what lies ahead: accidents, moose, speed traps, tourists trying to feed bear cubs. It’s also how sex workers—women known disdainfully in the trade as “lot lizards”—broadcast their siren song.

Jay’s stories tick over as fast as the numbers on the odometer—growing up a Jehovah’s Witness; marrying the girl next door; battling a meth addiction; doing time for smuggling pot into the United States. His voice softens as he talks about coming home after his rig broke down to find his wife in bed with her boss. He proudly shows us a picture of him and his wife, both tanned and healthy, and recounts the month they spent together on the road, criss-crossing the country—friggin’ happiest time of his life. He lost her to the road as much as to anything else.

Truckers like Ross and Jay haul the things we eat, wear, sleep on, drive, and live in. In a way, they haul civilization. They cruise on by as cogs in a vast supply chain—every turn mapped, speed automatically regulated, sleep logged—and on rare occasions, when they’re feeling bored or charitable, they offer hitchhikers a ride. After twelve hours of endless yellow and white lines, cars passing and passing and passing, Jay drops us in Vancouver and disappears into a river of red tail lights.