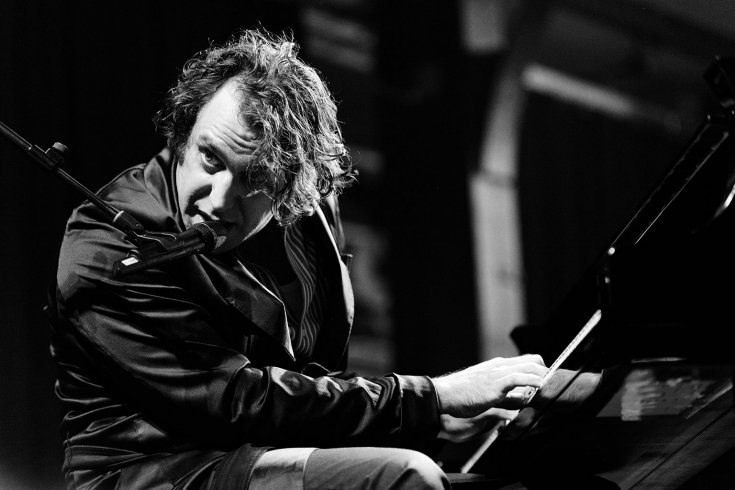 Decomposition Chilly Gonzales’s instruction book, Re-Introduction Etudes, has already sold 20,000 copies—more than many of his albums.

It is a warm afternoon in May, and Chilly Gonzales, as usual, is seated at a piano. The instrument, a worn Steinway and Sons grand, is onstage at a concert hall in the Royal Conservatory of Music in Toronto, under the gaze of some 250 students, parents, and musicians, both active and lapsed. Over the course of his sold-out lecture-cum-lesson, Gonzales doles out advice equal parts technical (“Play that motif up the octave”), philosophical (“Your job as a composer is to poeticize a feeling”), and unorthodox (“Tease it! They want to be tortured”). At one point, he invites Coco Ma, a thirteen-year-old wunderkind, to come up, and asks what piano grade she is in. When she tells him she’s completing her ARCT diploma—her Associate of the Royal Conservatory certificate, the institution’s highest level of achievement—he responds, “What’s that? ”

Chilly Gonzales is the performance persona of forty-two-year-old Montreal-born pianist Jason Beck, whose dozen-plus albums alternate between classical piano, underground trip-hop, instrumental chamber music, and sardonic rap. He’s collaborated with Drake, Feist, and Daft Punk; written a song for an iPad commercial; and broken the Guinness World Record for the longest solo concert (300 songs over twenty-seven hours). During live performances, he often refers to himself as “Chilly Gonzales, the musical genius,” sporting one or another of his outlandish outfits: a safari suit, a lab coat, a bathrobe and slippers.

At the conservatory master class, though, Gonzales wears dark slacks and a cardigan—a wardrobe fit for a professor. As part of the contemporary 21C Music Festival, he is teaching the session to promote his latest project, Re-Introduction Etudes, a self-published instruction book that couples simple sheet music with witty descriptions of music theory. Gonzales says he has met legions of erstwhile pianists who wanted to pick up where they’d left off, and it seems those former students were sincere. Etudes has had better sales—about 20,000 copies so far—and more staying power than many of Gonzales’s albums. “A whole different world woke up to this project,” he says.

For Etudes to be a success, something had to go wrong. In Canada, both private and in-school music education are on the decline: the number of conservatory exams, a crude measurement of enrolment, peaked in the 1990s. Even the students who do learn to play instruments often give up as adults. Gonzales is not the kind of person you’d peg to bring these people back—he quit piano lessons in the conservatory’s grade six—but he may be precisely what music education needs. “I don’t really think of myself as a teacher, per se,” he says. “I feel more like I’m somewhere in between a motivational speaker and a charming uncle.”

Kids quit piano lessons for all the reasons you might suspect: bad teachers, dull repertoire, the pursuit of less dweeby pastimes. They usually begin studying before turning six, at the behest of their parents; they drop out between the ages of thirteen and seventeen, as parental control wanes and puberty, peer pressure, and the academic stresses of high school kick in. According to a Harris/Decima survey conducted for the Royal Conservatory in early 2014, one in five Canadian households has a child in private lessons, while nearly as many have one who is no longer enrolled.

When Jason Beck was three years old, his grandfather introduced him to the piano. But Jason had an on-and-off relationship with formal lessons, and he was more interested in Lionel Richie, Billy Joel, and MuchMusic than in his grandfather’s hero, Richard Wagner. He studied music at McGill University in Montreal before moving back to Toronto, where he had spent his teens. Then he went abroad to Germany, and created Chilly Gonzales. “Something about it appealed to me in a very instinctive way,” he says of the character. “It’s so clearly a false name: no one on earth can be born with the name Chilly Gonzales.”

Before the release of his 2012 album, Solo Piano II, Gonzales set out to improve his sight-reading—the ability to play unfamiliar pieces from a score. After wrangling with tedious teaching literature, he realized he could create something better, and Re-Introduction Etudes was born. For anyone who’s spent time with sheet music, Etudes is refreshingly entertaining. The twenty-four songs are dedicated to the likes of Mozart, Barack Obama, and “Your Ears.” Instructional notes include “This ain’t ‘chopsticks,’ ” “Religious while skeptical,” and “Just play it.” Describing the feel of a progression of major chords, he writes, “Insipid, cloying, unrealistic. A lie told to children. The false optimism of Americans (in the eyes of Europeans).” Still, none of the songs would feel out of place in the Celebration Series, the conservatory’s adjudicated exam repertoire.

When I visit the conservatory to speak with its president, Peter Simon, I’m greeted by the muffled sound of the piano through his office door. He sneaks five minutes in when he can, between appointments. “Even I had a choppy period in high school,” he says. “I didn’t really have lessons for four years. That’s pretty normal.” Simon laments the devaluation of music education in schools, which he traces to the elevation of science and math at the expense of the arts. “The sciences and the arts are both efforts to understand the world. They have to be unified, but they’ve been separated in schools,” he says. “There used to be a culture of embracing self-expression and development and creativity and enthusiasm. We’re losing that.”

The decline in music education varies by province. A 2014 report by the non-profit organization People for Education shows that while more than 85 percent of public schools in Quebec and Atlantic Canada have specialist music teachers, the situation in Ontario is much more bleak: Only 43 percent of the province’s public elementary schools have one, down from 49 percent in 2012. Nearly one-third of these schools have no music teacher at all. In a national survey from 2010, schools were asked to identify the single biggest impediment in music education they faced. Funding was the top concern (26 percent), followed by a lack of time (24 percent); only 5 percent said the problem was an absence of student interest.

To reverse this trend, Gonzales suggests a two-pronged approach: First, divert some of the government funding earmarked for artist grants to education. Second, follow the example of his Toronto high school, which hired working jazz musicians, rather than teachers, to give lessons. “A lot of them don’t take the time to figure out what’s sophisticated about modern music,” he says of teachers. As an instruction tool, Gonzales says, pop is the perfect bait and switch: start where the student is interested and work backward from there. “People think it’s funny that you’re applying something academic to something lowbrow,” he says. “But, goddammit, they might just learn something.”

Educators are increasingly adopting this tactic. Boston’s venerable Berklee College of Music offers pop-rock vocal and keyboard classes, tapping the Beatles, David Bowie, and Adele for teaching materials. In the lectures of Professor Nicole Biamonte—who has taught at Yale, McGill, and elsewhere—students are as likely to hear Rush as they are to encounter Rachmaninoff; in Pop-Culture Pedagogy in the Music Classroom, the 2011 book she edited, Biamonte and other instructors propose mash-up analysis, iPhone apps, and Guitar Hero as valid learning tools. To some extent, the Royal Conservatory is embracing such methods, too. The school has offered DJ and hip-hop workshops in the past, and the newest edition of the Celebration Series includes a song from Disney’s Frozen; the grade nine book, meanwhile, features “Carnivalse” from Gonzales’s 2010 record, Solo Piano. “I’ve transcended my own grade,” he says, with childlike giddiness. “Unbelievable.”

A couple of days before the conservatory master class, Gonzales is in a Toronto studio with Majid Jordan, the local duo that co-produced Drake’s “Hold On, We’re Going Home.” He’s been tasked with writing a string arrangement for one of their new tracks. “I guess they thought I’d put my fingers down and there’d be strings all of a sudden,” he says. Instead, in teach-a-man-to-fish fashion, he spends twenty minutes plotting out four string sections for the young artists, showing them a new way to orchestrate their songs. “Some people are truly born to teach,” he says. “I’m discovering that in myself more and more.”

Still, Gonzales hesitates to call himself a teacher—although he was one briefly, years ago. He had just graduated from university and was trying to make whatever money he could, playing in restaurants and in a lingerie shop in Toronto’s Yorkville neighbourhood. He had one student, a family friend. At their first lesson, he sat the boy down at the piano and said, “Okay, kid. What do you want to play? ”

Luc Rinaldi has written for Maclean’s, Toronto Life, and Maisonneuve.