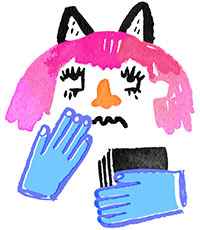 In 2004, fourteen years after the suicide attempt she calls her rock bottom, Carol O., a government worker and recovering alcoholic, came down with an unidentified condition. It attacked her central nervous system, leaving her suddenly debilitated. “My whole world collapsed,” she tells me over coffee in her Ottawa townhouse. “I lost my speech, couldn’t write, couldn’t keyboard. Coordination completely went.” Most worrying, her regular meetings at Alcoholics Anonymous, crucial to her sobriety, became almost inaccessible. After months of trying to adapt—she used plastic letters to communicate at meetings, and members even met at her house—she discovered she could participate by email from home, through the program’s online inter-group.

Partially mobile now, she still does the bulk of her recovery work in two AA-sanctioned email groups, in addition to attending meetings in person once or twice a week. “I’m actually working my program harder in online AA,” she explains. She now spends four or five hours a day reading and responding to emails, sent by hundreds of fellow alcoholics from all over: from the nearby homes of other ill or disabled people; from overseas, where members are travelling, working, or deployed on military service; and from sparsely populated communities in Canada’s North, where addiction is common but treatment is difficult, if not impossible, to find. “I like having to think about being an English teacher in China: she’s maybe three months sober and faced with a New Year’s celebration—is it rude to turn down a drink? ” she says. “Or a worker on an oil rig: everyone’s partying at night, there are no meetings, and he can’t leave. I used to travel a lot; I can’t do that now. But this opens up the world.”

For AA, that world is vast. The foremost method for treating alcoholism, it counts over two million members in over 150 countries, and is the standard course of action recommended by doctors and mandated by courts. (In the US, where membership is highest, it is prescribed in 94 percent of private and public treatment and rehab centres; the concept of the twenty-one-day residential treatment is based on AA’s recommendations.) After seventy-six years, it is both a spiritual institution and a powerful brand, so its expansion to the web in the mid-’90s, when it first developed online bulletin boards, seemed natural. Maintaining its integrity on digital terrain, however, has proven to be a different story.

Back then, the main dilemma was how to recreate a traditional group meeting in cyberspace. Meetings, which are powerfully confessional, give members a sense of community that can offset triggers like isolation and shame. Then there was the persistent problem of non-members “lurking” in web meetings, often as a way of testing out the program before joining, and potentially inhibiting members from the “rigorous honesty” AA advocates. To address these issues and oversee its web resources, it created a committee that advises members on maintaining Masonic-level privacy and accountability (in Carol’s email group, a “birthday greeter” distributes digital medallions for sobriety milestones). It also vets online groups and content that apply for official status; the committee only endorses a handful.

AA never anticipated the rise of Web 2.0, the shift from static, top-down web pages to a dynamic flow of content that is largely user created, collaborative, and (at least in theory) democratic. Now its online presence must compete with a glut of off-brand 2.0 recovery tools. Recovering addicts can follow one of the dozens of Twelve Step feeds (@AlcoholicsAnony is popular) that dispense sobriety advice on Twitter; join Facebook support groups (the largest has over 20,000 members); download themed podcasts to computer or iPod; or install smart phone apps that generate daily meditations. They can also create profiles on IntheRooms.com(150,000 members), a sort of sobriety Facebook; and the more fancifully inclined can join 500-plus AA members in the virtual world of Second Life, where meetings, complete with pixelated coffee, are held twice daily. In other words, apostate alcoholics can cherry-pick their way through recovery, mixing and matching options to create their own programs. “Fifty years ago, it was more about ‘This is what works,’” says Carol. “But now it’s much more about ‘This is what worked for me.’”

If the email meetings of 1.0 strained AA’s core values of community and anonymity, the resources of the 2.0 era strike at the heart of its brand: methodology. Despite the collectivist language—“Addicts helping addicts” is a common insider description—the approach is extremely rigorous; sobriety is achieved not by abstaining from drink (those who abstain without AA’s help are called “dry drunks”), but by “working a strong program”: following the original Twelve Steps in sequence, with the support of a sponsor; attending meetings regularly; doing service by volunteering at meetings and as a sponsor; and turning over one’s will to a higher power. The emphasis on submission has always caused controversy, yet it is also the aspect of the program that millions of members unequivocally credit with their recovery. “As a professional, I want to recommend that clients seek help that has been shown to work,” says Cathy Barrick, director of operations at Renascent Treatment Centre in Toronto.

There is some evidence that AA—whose tenets have always been at odds with the Internet’s lawless ethos—has seen its numbers fall since the rise of the web, from 2.1 million in 1995 to two million in 2007. In the meantime, other online players have stepped up: SMART Recovery’s membership has increased sixfold since the non-religious group’s inception in 1995. Curtis Boudreau, president of the Alberta chapter, claims the program’s flexible method is uniquely compatible with the Internet. Unlike AA, SMART recommends that its members use whatever tools they find useful (including meetings): it has embraced Web 2.0, and its Twitter feed, Facebook group, and blog constitute important components. “The first thing about SMART is self-management,” says Boudreau, a recovering addict who combines the program with Narcotics Anonymous meetings. This past July, it was introduced as an option for addicts in the Alberta probation and family services system.

As our lives continue to migrate online, taking on the web’s rhythms and conforming to its logic, AA’s stronghold on the recovery market looks less certain. “The use of non-AA-approved resources is something people in my email group really struggle with,” admits Carol, who sticks to 1.0. Some fear that the new tools might “dilute what in AA has worked as a whole”; others appreciate the options. On her computer, Carol pulls up a searchable online index of The Big Book, the program’s official catechism. It’s unapproved, she cautions, but nevertheless popular. She types a keyword—“gratitude”—into a search field, and the bible of AA reconfigures, filling her screen with wisdom on demand. Accessible but ungoverned, individuated yet improvised, it is addiction treatment at its best and worst—a mirror of Web 2.0 itself.

On the web, the issue of property rights gets colourful

On December 7, 2006, US Court of Appeals judge Richard Posner signed in to Second Life (a virtual world in which users interact through self-designed avatars, make transactions, and own property) to promote his new book on constitutional rights in the wake of 9/11. The event took place in a Grecian amphitheatre, where Posner’s avatar, a computer-generated representation of himself, was greeted by dozens more, including a woman with cat ears, an anthropomorphic raccoon, and a grey alien in a helmet. During the Q&A portion, users were more interested in virtual property rights than in American affairs. Linden Lab, creator of Second Life, has avoided drafting a legally binding constitution for its users, which has resulted in an essentially anarchic society: hackers can steal virtual goods that have real-world monetary value, free of punishment. Posner answered questions generously. As the session ended and audience members lined up to have him autograph virtual copies of his book with a digitized signature, firebombs began raining down on the venue, in a simulated terror attack initiated by a Second Life prankster. “I’m afraid I’ll have to go,” Posner exclaimed, “before I’m blown up.”

Alexandra Kimball contributes regularly to Hazlitt and has been published in the Guardian, Toronto Life, and The Walrus.
Lauren Tamaki

Lauren Tamaki has drawn for the New York Times, GQ, and Toronto Life.