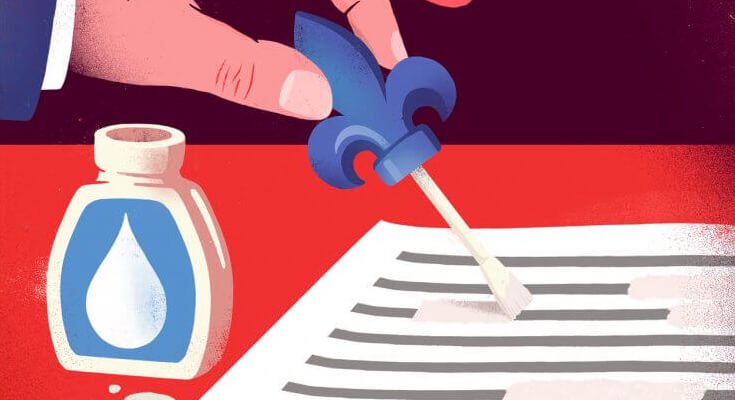 This August, roughly 130,000 grade nine and ten students in Quebec will crack the spine of a new history textbook. Entitled Reflections.qc.ca (Mémoire.qc.ca in French), its two volumes—adding up to more than 600 pages—cover the story of Quebec and Canada from before European contact to the present. Writing history often involves hard decisions about what to include and what to leave out. But the omissions in Reflections are, at times, astounding and depict Quebec as a society struggling to survive in the face of the indifferent, sometimes malignant country surrounding it.

The First World War, which cost Canada about 60,000 lives, was the site of some of the country’s most heroic battles, such as at Ypres and Vimy Ridge. Yet, in the ten pages devoted to the war, English Canadians—who found themselves divided over conscription after it was introduced in 1917—are represented almost exclusively as jingoistic warmongers who used French Canadians largely as cannon fodder. There is no mention of Major Talbot Mercer Papineau, arguably one of Quebec’s greatest military figures. There’s also no mention of “In Flanders Fields,” a wartime poem still recited throughout the world—even though its author, Canadian doctor and soldier John McCrae, spent a considerable part of his career in Montreal.

The Second World War, a conflict many French Canadians at the time regarded as a British concern, gets similarly short shrift. The section about the Holocaust merits only 138 words. Montreal’s crucial role as a hub for the country’s war effort goes unnoticed, while Camillien Houde, the city’s wartime mayor, is included for his public opposition to Ottawa’s national registration, a stance that got him interned for four years. Unnoted is Houde’s enthusiastic defence of Jacques Dugé de Bernonville, a militia leader in France’s pro-Nazi Vichy regime, who fled to Canada after the war and was sentenced to death in absentia for the murder of resistance fighters.

It goes on. The textbook refers to the establishment of Quebec’s public health care system in 1961 yet neglects to mention the precedent of Saskatchewan premier Tommy Douglas, who helped set the groundwork for medicare in his province in 1947. Precipitating the October crisis of 1970, radical Quebec separatists kidnapped and killed Quebec cabinet minister Pierre Laporte and directed authorities to his body, which they had dumped in the trunk of a car. Yet, in the textbook, Laporte was simply “found dead,” and his killers are referred to as bloodless “abductors.”

For nearly two centuries, the Quebec history curriculum has been shaped by the ideological biases of governments and historians. In 1831, Joseph-François Perrault wrote the first Quebec history textbook, which praised the “good behaviour” of the British army when it conquered New France in 1760. Its successor, François-Xavier Garneau’s four-volume Histoire du Canada, was instead a nationalist ode to French Canadians fighting against English hegemony. The story Quebec tells about itself has gone back and forth several times since, blowing alternatively hot and cold on what exactly it is: part of a country that let it survive and thrive, despite the twin existential threats of the English language and (mostly) English demographics? Or a collection of frustrated people forever denied their own destiny? Are Quebecers participants in the Canadian experiment or its victims?

Nationalist governments, particularly with the rise of the sovereignty movement in the 1960s, have hardly been shy about claiming Quebec’s victimhood. Even the province’s current Coalition Avenir Québec government—which has pledged “to make Quebec stronger within Canada” while ruling out another independence referendum—has accepted the textbook, possibly because it emphasizes deep-rooted differences between Quebec and the rest of the country. Having positioned itself as the defender of Quebec’s collective identity, the CAQ has become very good at stoking fears of loss and assimilation for political gain. In this sense, Reflections serves as a bit of nationalist revenge; though secessionist forces are in retreat, the textbook is a strategic, if spiteful, reminder of their existence.

History is never objective. Readers of the 1913 text History and Geography of British Columbia came away with the idea that Hudson’s Bay Company governor George Simpson’s “skill in the management of the native races did much to save Canada from the horrors of Indian warfare.” The British are described as being unceasingly fair with the Indigenous people—treating them “kindly, firmly, honestly”—going so far as to properly baptize, and otherwise make “civilized,” Indigenous children. In 1913, colonizers considered this God’s work. Today, it’s called cultural genocide.

This process of claim and counterclaim is how history usually tracks shifting societal perspectives. But it can be exploited. The nationalist flavour of Reflections stems from an election promise by the Parti Québécois a little over a year before the 2012 provincial election. Led by Pauline Marois, the sovereigntist party was in position to defeat the scandal-plagued Liberal government. But, with support for independence steadily dropping, the PQ needed identity issues that had nothing to do with secession. So the party zeroed in on the Liberals’ 2006 education reforms, which sought to render Quebec history “less political” and generally more “pluralist.”

The historians advising Liberals at the time criticized a curriculum they felt neglected the contributions of nonfrancophones and put too much of its focus on conflicts between the English and the French. The reforms, for example, removed details about how Canada repatriated its constitution in 1982 without Quebec’s approval and about the federal government’s failed attempts to remedy that, such as the 1987 Meech Lake Accord. Historian Jocelyn Létourneau, who was briefly involved in the 2006 reforms, praised the new curriculum’s attempt to break from a “miserabilist” account of Quebec history.

Several historians, however, savaged the Liberal changes. In the newspaper Le Devoir, the reforms were declared nothing short of “a pure exercise in federalist propaganda.” A petition was started calling for their rejection and for a parliamentary commission into why they were implemented. Éric Bédard, a pillar of Quebec’s nationalist historical thought, complained that the reforms didn’t highlight the trading partnership between early French explorers and Indigenous peoples—one fairer than the paternalistic, often blood-soaked version associated with the British. Nor was there much on Quebec’s Patriote rebellion in 1837 or how the Quiet Revolution overcame the Catholic Church’s outsized power: two events that presented Quebec nationalism in a more favourable light, from the bravery of French uprisings against the British to the role nationalists played in freeing Quebec from the chains of the Church. A PQ government would right the situation by “placing Quebec history at the forefront, where it belongs,” the party promised.

Quebec is hardly unique in being suspected of using its classrooms to foster separatist ideas (during Catalonia’s pro-independence referendum in 2017, the Spanish government fielded dozens of complaints about “indoctrination” at schools in the breakaway region). It’s also no surprise that, given its polarized place in the country, Quebec has so deliberately and consistently relied on partisan observations of the past to shape its policies and political rhetoric. “All nations have something fundamental to their collective identity,” says Létourneau. “In Canada, it’s about diversity. We largely revisit the history of Canada through the lens of diversity. In Quebec, it’s duality. There’s you, and there’s the other. So when we talk about anglophones, it’s in the context of adversity—we didn’t have it easy, we got screwed, it’s always someone else’s fault.”

This ideological system has made playing the victim good politics in Quebec. Once elected in 2012, the Marois government promptly started work on an overhaul of the province’s history curriculum. Bédard was brought in, and one set of historical omissions was swapped for another. In 2014, Létourneau said Bédard had become a “nationalist spin doctor.” When I spoke with him recently, Bédard accused Létourneau of “wanting to change Quebec’s collective memory.”

Not quite, counters Létourneau. The point is to complicate a national story that seems unable to see Quebec as more than a tiny society threatened by the forever-encroaching Anglo tide. “French in North America will always be vulnerable,” says Létourneau. “Some people take it personally, others don’t care. Who’s right? I’m not sure, but as a historian, it isn’t my job to create political narratives that foment the idea that we’re disappearing.”

History, however, doesn’t always belong to historians. Marois’s PQ government lasted all of eighteen months, but its vision of Quebec’s past will be decidedly more enduring. Despite calls from Montreal’s English language school board to pulp it and start over, the textbook is staying in classrooms—omissions, exaggerations, and ahistorical overindulgences be damned. “History will always be subject to debate,” CAQ education minister Jean-François Roberge said last November. “I think it’s normal not to have unanimity on that matter.” He’s right, of course. In Quebec, kingdom of the aggrieved, history isn’t only alive. It’s forever political.

Martin Patriquin is a Montreal-based writer. He has contributed to the New York Times, the Globe and Mail, and iPolitics.
Sébastien Thibault