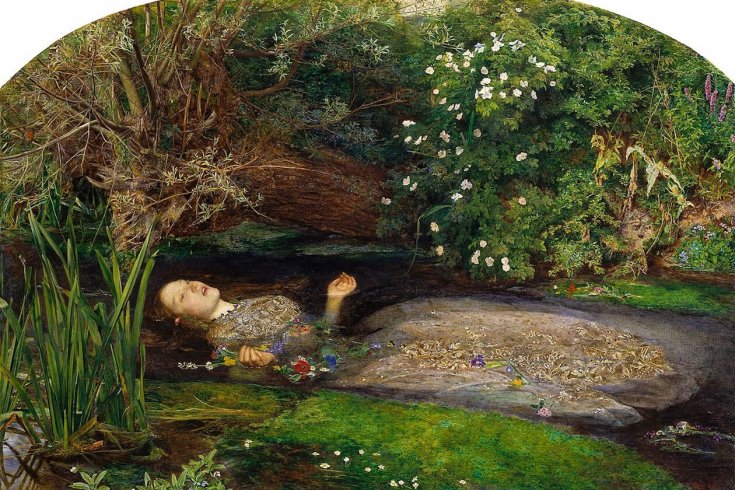 Edgar Allan Poe wrote that “the death…of a beautiful woman is, unquestionably, the most poetical topic in the world.” Dead women have always been popular in art. For example, John Everett Millais’s esteemed painting of Ophelia: spurned by Hamlet, she is depicted as floating on top of the water at the moment of death, her delicate body adorned with wildflowers. Ophelia look-alikes are everywhere in fashion spreads in women’s magazines. Their white stockings and dresses are bloated like stingrays. Their hair curls around heads in tangled, fairy-like knots. Their eyes are closed sweetly, as though the women are eternally prepared for a kiss.

But the models aren’t just despairing, depressed girls like Shakespeare’s perturbed lass. The images suggest gang rape, murder, and extreme physical abuse. On a 2014 episode of America’s Next Top Model, the contestants were asked to pose as though they had just been murdered. Jimmy Choo had an ad that featured a seemingly dead woman lying in the trunk of a car, while a man (Quincy Jones) rests against it holding with a shovel. Calvin Klein ran an ad where Lara Stone appeared to be in the midst of being gang-raped. Marc Jacobs had Miley Cyrus sitting in the sand next to a lifeless redhead. W ran an editorial featuring a half-dressed woman lying unconscious in the woods. And these are but a few examples.

While writing my most recent novel, The Lonely Hearts Hotel, I decided to investigate this idea of the brutally murdered woman as art. I presented a series of images of murdered girls as still-life paintings: as though they were flowers that were plucked, at the height of their bloom, and arranged by men in a manner in which their beauty could be fully appreciated. There were girls with bullet holes in their heads. They were standing at the bottom of the river, their hair blowing magically and effortlessly around them, as they opened their mouths in perfect O’s of surprise.

This was perhaps the most violent depiction I had ever created of girls in my novels, and I have, at many times, subjected my characters to all manner of degradation. Why, you might ask, do I find myself writing stories about the broken bodies of young women?

My own body was subjected to repeated physical abuse as a child. I was abused so badly that I was once rushed to the emergency room for stitches. I was wearing grey tights. I remember the leg of one slowly turning red. Physical abuse creates a break in consciousness, a divide between the physical and spiritual self. This divide lead me to my interest in writing from the perspective of an alienated female body. I was drawn to such a body because I existed in one.

The world began to scrutinize me in a perverse way when I hit puberty. The neighbours looked out their windows and gave me dirty looks because I was walking the dog in jean shorts or just sitting blowing bubble gum on a bench or twirling a baton while talking to the garbage man. Suddenly, the world became obscene, and I hadn’t done anything. Everyone was just projecting these thoughts onto me.

I was surrounded by perverts, as any girl is. Once, I was sitting on a public bus at rush hour, and the man next to me took my hand and put it on his penis. I was buying milk at the corner store when a man opened up his trench coat to reveal that he had nothing on underneath. I looked up at the convex mirror at the end of the aisle. There was nothing that the mirror could do. In any case, the owner of the corner store could rest assured this man wasn’t stealing anything. I was walking my toy poodle, and a gold Coupe de Ville drove up next to me. The man inside inquired whether I would like to star in pornographic films. I answered the telephone, and the man at the other end asked me if I would like to sit on his face. Like telemarketers, they always called at dinnertime.

I was a blank screen with pornographic male gaze being projected onto it.

It was obvious to any onlooker that I was a girl—and a poor one. I wore tiny dresses, with holes, that I got second-hand. I had a blue leather jacket I’d pulled out of the garbage. Because I was poor, men in particular thought they had a right to say whatever they wanted to me. And I often felt myself separated from the herd, like a gazelle with a broken leg.

Because of abuse, I used to run away from home. Montreal in the late eighties was in a state of disrepair, and it seemed as if so many buildings were falling into a state of ruin. There were abandoned apartments and warehouses and churches you could crawl into to sleep. There were many abandoned nunneries, their doors and windows boarded up, that were turned into squats.

I crashed in a nunnery once. There was an Edwardian couch with blue felt pillows. I slept on it, curled up in a ball with my ski jacket as a blanket.

I thought I would wander around having a few good times and laughs and then be murdered. That’s what happened to girls who ran away from home. Underneath the ground are girls in basements. Maybe they are alive; maybe they are dead. They are like bulbs that bloom into all our treacherous and beautiful ideas.

I met a girl wearing a rainbow-striped dress that went down to the ground. She had a pink beret over her thick, black hair. I adored her look. Girls dress for each other, not for boys. She was so mad it was lovely. She spoke about the moon and sadness so eloquently, I would be almost jealous. Once, she stole me a can of cranberries from the supermarket. I wasn’t sure what I was supposed to do with it. Once, she was committed in the psychiatric wing of the hospital. I could never see her. I would write her letters and leave them at the desk.

There are people who hate a free-spirited girl. You are supposed to choose a role and perform it. There are only a handful of roles you are supposed to play. Men all have Pygmalion complexes. They wanted to use your body to transform you into the girl of their dreams. They never understood that girls weren’t put on this earth to please them.

I fell madly in love with everything. Everything made me excited. Drinking coffee out of a cracked cup with a yellow rose on it. The covers of paperbacks in bookstore windows. The smell of skunk as I walked along the train tracks. A row of plastic horses on a windowsill. The gold songbirds on the wallpaper in a motel room. The stack of television monitors in the store window, each playing a different television show. A trumpet player in the subway.

You see the world in such a strange and intense and creative way in that brief time when you truly believe you don’t belong to anyone. When you are most likely to be murdered. When abuse cannot touch your personhood. The way I saw the world then was what I wanted to capture in art.

People have accused me of writing weak characters or disempowered females. They accuse me of that because everything about women is interpreted as weak and shallow and vulnerable. If an intelligent and serious person is judged by their similarities to a middle-aged white male, then yes, I fail, and my characters fail too.

But girls contain multitudes. We are made up of so many odd parts. The reason that the monster in Frankenstein is so memorable is that, when it opens its mouth, out comes the voice of an alienated teenage girl.

“Portrait of the Artist as A Young Corpse” is taken from the collection, Luminous Ink: Writers on Writing in Canada, edited by Tessa McWatt, Rabindranath Maharaj, and Dionne Brand, published by Cormorant Books, Toronto. Copyright © 2018 Heather O’Neill. Used with the permission of the author.

Heather O'Neill is an award-winning novelist and essayist. Her works include Lullabies for Little Criminals and The Lonely Hearts Hotel. Her most recent novel is When We Lost Our Heads. She lives in Montreal.