Poetry Should Talk Honestly About Money | The Walrus
Skip to content 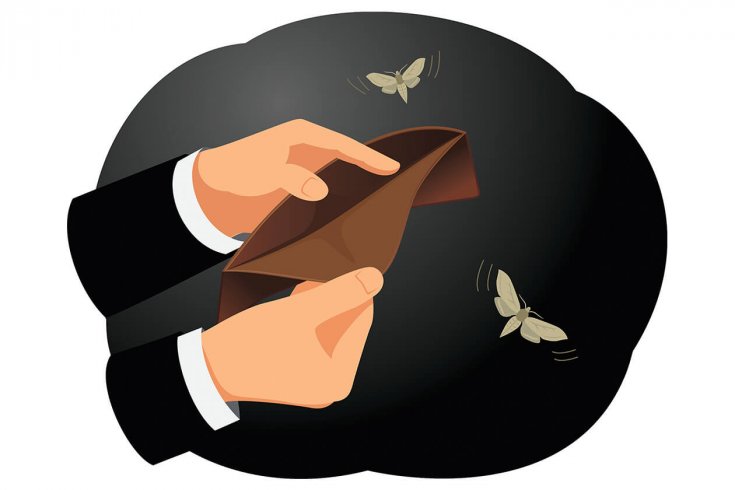 It’s April 2016 and I’m unemployed again. When lobster fishers launch their boats in the spring, we contract professors drift into harbour, mooring to their vacated spots on the unemployment lists.

But it’s worse this season. The college where I have been teaching for two years, filling in for professors on leave, doesn’t need to rehire me. Soon my unemployment benefits will run out, and I’ll untie again, sail off. It’ll be my fourth move in three years. And moving is a lot of work, even if, like me, you live in a cheap one-bedroom apartment, and you sleep on an air mattress (and have another air mattress as a “couch”) and you don’t bother unpacking anymore, and you only own a few pieces of disintegrating, assemble-it-yourself furniture. My attachments to people, places and things are disintegrating too, but I don’t have time to worry about that. I’m thirty-six, and need a job.

But while I make my living as an English professor, that job stems from my career as a poet, without which I wouldn’t have earned my degrees or found teaching jobs. Many poets and other creative writers are in the same situation, struggling to make money in the academy. For those in the publishing industry, the situation is worse.

Few poets, however, write honestly about their economic situation. Indeed, it’s a challenge to find any poet willing to come clean about money: wanting it, enjoying it, needing it, or lacking it—even though this must necessarily be our condition.

When William Wordsworth wrote his famous lines “the world is too much with us” he wasn’t only commenting on our alienation from nature, he was criticizing an emerging culture based on “getting and spending.”

At the time, industrial capitalism and economic markets were reshaping ordinary life in dehumanizing ways. Powerless in the face of these socioeconomic changes, prominent Romantic writers positioned themselves and their art outside of society as a kind of “a defensive reaction,” according to British scholar Raymond Williams, which culminated in the movement’s belief about “the separation of poets from other men.”

This defensive reaction continued into the nineteenth century, where the Art-for-Art’s-Sake movement claimed that the best poetry should avoid social, moral, or economic justification for its existence. In the twentieth century, modernism celebrated the poet’s separation from society through its embrace of the convention-flouting rebel. Today, the attitude manifests itself in ideas about the “freedom” of poetry. No one tells you how you are to write poetry, so it is free from labour discipline. Nor is poetry worth any money, so it is free from market demands. These are common beliefs, even among poets. But the real story is more complicated.

According to French sociologist Pierre Bourdieu, poetry is part of a prestige system that operates as an “inverted economic world,” where literature that seems the least interested in immediate profit is rewarded with the praise of a limited but influential readership, such as editors and professors.

Thus the high prestige of avant-garde poetry—the “purest,” most specialized art form that expects next-to-no sales because only experts can appreciate it—and the relatively low prestige of best-selling romance novels, which any literate person can understand. Prestige, or cultural capital, turns into economic capital when writers get grants, awards, or well-paid positions on the strength of their literary accomplishments, which the authors pursued while apparently economically disinterested. In poetry’s upside-down economy, in other words, the path to long-term financial security begins with behaving as if money doesn’t matter.

As a result, poetry’s anxiety around money has remained remarkably consistent, regardless of school or style. When poets do discuss money, they try to find ways to distance themselves from their own statements. Consider the wealthy American poet Frederick Seidel, who has become a literary celebrity for his calculatedly outrageous first-person sentiments celebrating Ducati motorcycles, penthouse apartments, tailored suits and sex with much younger women:

I live a life of appetite and, yes, that’s right,
I live a life of privilege in New York.
Eating buttered toast in bed with cunty fingers on Sunday morning.
Say that again?
I have a rule—
I never give to beggars in the street who hold their hands out.

Because we’re unsure whether the persona on display here is Seidel himself, we have trouble identifying those views as the poet’s own—which is precisely Seidel’s intention.

If conceptual writing can be said to have its own Seidel, it might be Josef Kaplan. His Kill List (2013) enumerates in alphabetical order the names of “comfortable” and “rich” poets in quatrains, a list that includes the author himself. The poem’s fifty-eight quatrains read like this:

Many on social media were offended by the title’s implicit death threat. Like Seidel, Kill List trades on seeming to go too far, while in reality its compositional procedure means the poem cannot go far enough. We don’t learn what it means for the poet to be comfortable, or how that compares to someone who is not. Meant to provoke outrage, the Kill List involves little actual discussion of how money shapes lives.

The taboo on talking about money, however, doesn’t exist in other social contexts. I talk about money with friends, many of them poets, most of them broke. This is gossip, to be sure, but in these conversations we find out what kind of deals we get where we work, and we share information about how to manage our lives. Talking this way also creates networks of support, alleviating the shame and despair we sometimes feel.

This taboo also isn’t necessarily enforced in other countries. Some of my family live in Castelliri, a rural, working-class town in central Italy. I’ve resided there too. In Italy, economic precarity is an even more widespread condition than it is in Canada, and that country’s turbulent history has fostered a rich leftist tradition. Money comes up all the time in conversation. Meeting someone new often involves explaining not only what I do, but eventually, how much money I make. This cultural attitude has resulted in the beautiful and class-conscious poetries of Cesare Pavese, Sandro Penna, and Pier Paolo Pasolini. More recently, Italy has been a hub of new Marxist thought and was, indeed, the origin of the Occupy movement.

North American poets have to stop pretending that money doesn’t matter to them, or that it makes no difference in their lives. Businesses and institutions have now borrowed precisely this idea from the arts, banking on the amenability of grad students, interns, and contract employees to work “for the love of it.” At a union meeting at my college, the chair of the Business department announced that she didn’t think contract professors should be paid so much (we make about 60 percent of what tenured faculty do). The contract professors she has hired, the chair explained, do it as a public service.

The kind of poetry important to me right now is intelligent but open to non-specialists, confessional but aware of their contexts, political without losing the personal. It’s also poetry that doesn’t shy away from the subject of money.

A number of recent Canadian collections—such as Nikki Reimer’s Downverse (2014), which addresses the economic uncertainty of millennials or Matthew Henderson’s Lease (2012), based on the poet’s time in Saskatchewan’s oil fields—appear to answer Nelson, BC, poet Tom Wayman’s call for a literature told from workers’ own perspectives. The fact that, in Wayman’s words, “there are few honest depictions of our daily working lives,” deepens the shame many people feel about their jobs, which are often performed in exploitative conditions. Correcting this cultural omission, he suggests, might not only allow us to understand each other better, but might improve these conditions.

One recent book of poetry that discusses money with rare honesty is Jennifer Zilm’s debut, Waiting Room (2016). Zilm’s poems provide insight into a world where our unequal access to wealth is perhaps the most important factor in determining how we live—or if we live at all. At one point, Zilm reflects upon her job at a mental health centre in Vancouver’s Downtown Eastside, sometimes known as Canada’s poorest postal code. (The backdrop of Vancouver—consistently ranked our most livable city, while also being its least affordable—is important to Zilm’s book.) Part of the speaker’s job requires her to watch as the centre’s clients, many of whom are recovering addicts, take medication. These lines are from “Witnessed Ingestion”:

tells you a joke as she swallows
her methadone. Two gulps, a blue prison tat
on her wrist exposed
when she hands back
the brown plastic. You black out

The notion of “witnessing” is picked up later in the poem when the speaker fills out an application for a mortgage. Home ownership is a potent indication of economic security in any city, but this is especially true in metro Vancouver, where the average price of a house in 2015 was $1,248,600. These steep prices contribute to the city’s poverty by excluding most people from home ownership and driving rents up relentlessly. It’s no surprise, then, that the speaker worries about how to fill out the application. She avoids the word “casual” to describe her job, preferring “auxillary”:

Now you bring your pay stub to a bank.
In the box provided for occupation
on your mortgage application
you write Witness.

Does the poem record an actual or imagined response? She resists the bank’s classifications at the moment she seems forced to submit to them. By calling herself a “Witness,” the speaker redefines, and reclaims, her mental health profession, moving it from the administrative realm to something more fully human.

Collections like Waiting Room remind us that, if it hopes to be read, poetry has to start addressing what matters to people, and this includes economic concerns. Doing so might seem indecorous, even desperate. But aren’t we desperate?

Aaron Giovannone (@SincerityCity) is the author of The Loneliness Machine.