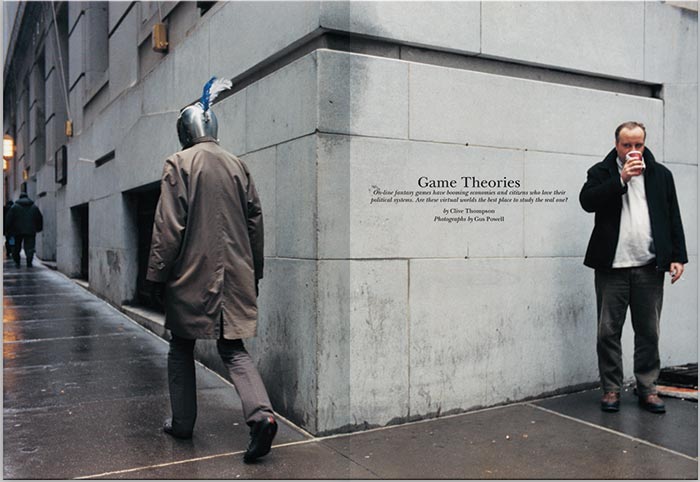 In June 2004, I wrote “Game Theories,” about the emerging world of video game economies, the trade in virtual goods. I profiled economist Edward Castronova, who discovered this field by studying the behaviour of players in EverQuest, a “massively multiplayer online roleplaying game” and a progenitor to World of Warcraft. As you play, you accumulate game loot—epic swords, potions, animal skins—which you can trade with other characters inside the game using its currency, the platinum piece.

Castronova found that people were also selling their characters and virtual possessions on eBay, for real-world American dollars. That allowed him to do some fun calculations, figuring out the exchange rate, as it were, for the EverQuest currency; a platinum piece turned out to be worth one US cent. He calculated that the average player generated $2,266 (US) in real-world value by playing the game, which at the time made EverQuest the seventy-seventh-richest country in the world, ahead of India and Bulgaria. Game economics was born.

Game economies have since exploded in size and value, as companies realized that players value their in-game swords as much as they do their real-life sofas and microwaves. While newer games such as League of Legends and FarmVille cost nothing to play, users can convert actual cash into game currency to purchase cool items, and power-ups to help accomplish difficult tasks. Designers have even created in-game auction houses so players don’t decamp to eBay.

This flood of market activity has produced a culture war. Some like the ability to save time by buying stuff, while others say it ruins the meritocratic fun, where the size of your effort and not the size of your wallet ought to matter. “In all of these games, it’s like, yep, you’re going to hit that wall and you’re not going to want to grind through it, so there’s the store. You can buy your way in,” says Castronova ruefully.

Of course, we’ve been wrestling with the perils of virtual money in the real world, too. Collateralized debt obligations and vaporous mortgages helped to tank the world economy; the euro has proved to be a crippling experiment; and markets are still propelled by the trade in securities as intangible as a Blasting Wand in League of Legends.

It may come as no surprise, then, that virtual game cash has produced its own civic and behavioural issues. A twelve-year-old in the United Kingdom racked up almost $1,000 on his mother’s credit card buying FarmVille loot. Worried about parallel economies, China outlawed the use of in-game money to buy real-life goods. Some game companies hire economists in an attempt to prevent asset bubbles, which is difficult. Running a big online game is now an odd blend of Soviet central planning (the game company designs the world by fiat) and Adam Smithian market forces (the players do unpredictable things).

Get the balance wrong? Chaos! When Diablo III was launched last year, designers didn’t put in enough “sinks” (expensive items that help soak up in-game currency), and the game spiralled into Zimbabwean hyperinflation, with meagre items suddenly costing wheelbarrows full of gold. Whether within games or across the global economy, the lesson remains the same: virtual money can cause very real problems.

Clive Thompson is the author of Smarter Than You Think: How Technology Is Changing Our Minds for the Better.