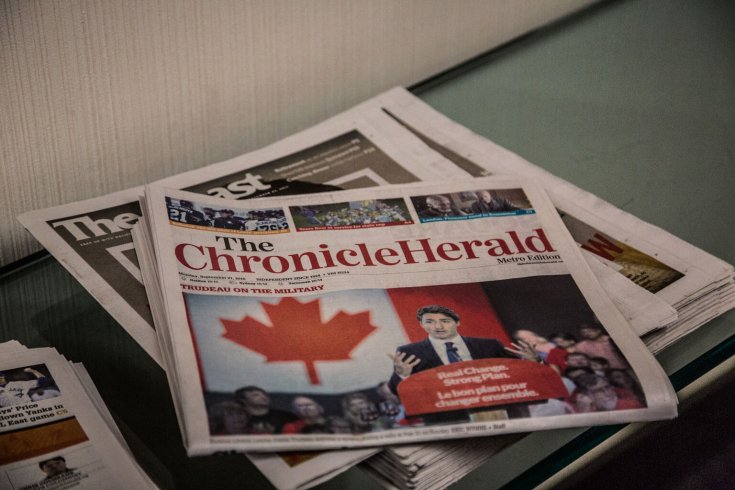 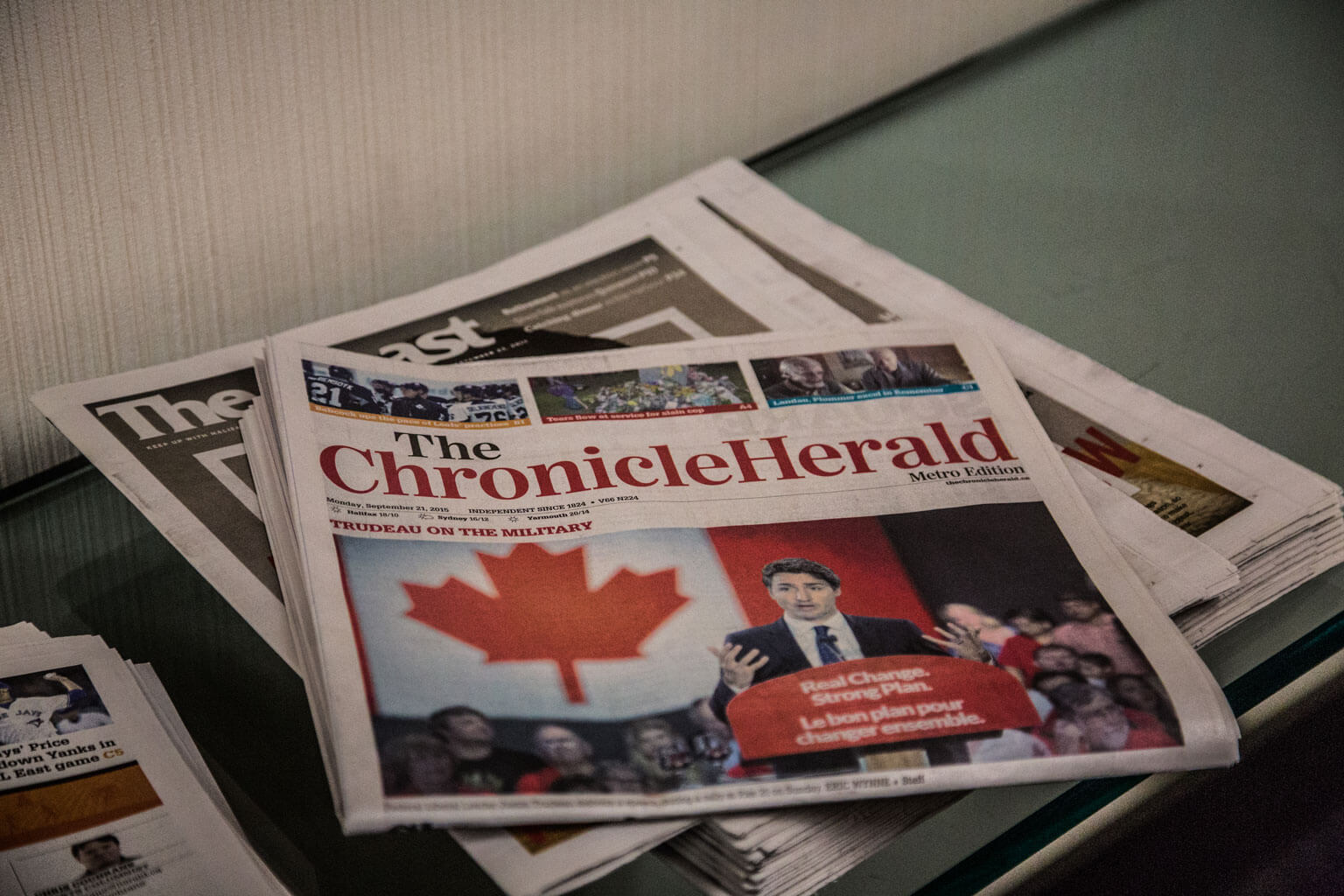 There was something bitterly ironic—and yet oddly appropriate—about the cookie-cutter “Dear readers” letters that appeared in mid-January editions of the Yarmouth Vanguard, the Digby Courier, and the Shelburne County Coast Guard, three once fiercely independent community newspapers in Nova Scotia owned by Montreal-based TC Transcontinental media group.

Under the hopeful banner, “Your paper just got bigger, bolder and better,” the letter to Courier readers began: “Over the last 142 years, The Digby Courier has been your reliable source of information on everything that happens in our region.” The mail-merged missive to Coast Guard and Vanguard readers was the same, except for the publication name and the number of years each had been a “reliable source” (119 for the Coast Guard; a mere fifty for the Vanguard).

They’d all “shared your laughter, your losses, your heartwarming stories and everything that is special about our beautiful county,” and now they were all joining together into one “bigger, bolder and better” Kumbaya content factory in order to serve-you-better, your-call-is-important-to-us, blah blah blah.

The good news for southwestern Nova Scotia—and we are desperately seeking a sliver of silver lining here—is that some semblance of one of those three reliable sources survived to publish another day. The same cannot be said in Guelph, Ontario, where the “intensely local” daily Mercury—which began life as an independent newspaper in 1867—breathed its last as a member of the Metroland chain at the end of January 2016. Or in Nanaimo, BC, where the 141-year-old Daily News also closed its doors last month, soon after the last post-Christmas sales, and just over a year after it was bought by Black Press.

January 2016 was not a good month for Canada’s beleaguered newspaper business.

In late January, editorial employees at the Halifax Chronicle Herald, Canada’s “largest independently owned daily newspaper,” went on strike in an attempt to save at least some of their journalism jobs from the pyre of management-mandated “innovation” that seems to mean fewer of them working longer hours for less pay writing McStories with no job security. Some observers—count me among them—believe this spells the beginning of the end for the 142-year-old, family-owned Herald.

Not to forget Canada’s largest daily. On January 15, the Toronto Star said it would close its in-house printing plant in July, putting 285 full and part-time employees out of work. At the same time, the Star announced it was shaving another thirteen jobs in its newsroom.

And then, of course, there was the latest, never-ending bad news spewing from Postmedia, Canada’s largest—and swiftest shriveling—“newsmedia company.”

Postmedia was created in 2010 out of the smoldering embers of a series of mergers, acquisitions, mashups and meltdowns, dating back to the mid-1990s. After debt-saddled CanWest was finally pushed over the cliff into bankruptcy in 2009, Paul Godfrey, the one-time CEO of the Sun Publishing Group, became front man for American hedge funds that scooped up CanWest assets for a bargain basement price and renamed it Postmedia (an intriguing name for a company that does, indeed, now seem to be hurtling towards its own post-media future).

Over the course of five years, Godfrey managed to cut Postmedia’s workforce to less than half, couple a 15 percent decline in daily circulation with a 25 percent drop in revenue, rack up $700 million in long-term debt and take the company’s stock from $17 a share to a barely traded penny stock today. Godfrey also engineered Postmedia’s October 2014 acquisition of 173 setting Sun Media newspapers for $316 million, somehow convincing Canada’s Harper-era Competition Bureau the deal was “unlikely to result in a substantial lessening or prevention of competition in any relevant market.”

The fiction of faux competition would be maintained, Postmedia insisted, by having an editor take single-reporter-generated content and massage it into two versions, one fit for the right-wing Sun and another for its slightly less right-wing counterpart. Hello, Competition Bureau? “Subsequent business decisions of Postmedia related to its acquired assets such as the announced job cuts,” a spokesman for the now Trudeau-era bureau sniffed to the CBC, “are not generally cause for the bureau to re-examine the transaction.”

The reality is that the traditional ink-on-paper newspaper business is entering its final death spiral.

Its demise has any number of fathers, most of them housed in publishing executive suites. First, there was the post-Second World War consolidation and corporatization of publishing that transformed newspapers from successful local businesses grounded in a vague notion of public service into just one more (or, better, a dozen) widget factories to be profitably overseen by a “soup salesman” rather than an experienced publisher. That was followed by the abysmal failure of those same soup-salesmen managers to understand, and respond to, the classified-to-Craigslist, this-changes-everything arrival of the Internet combined with some Manager Zero’s hare-brained notion to treat news as one more online loss-leader, which the rest of the industry followed, lemming-like, over the profit cliff, seemingly incapable of comprehending just how difficult it would become to ever put that “free” genie back in the bottle. With revenues collapsing, publishers decided to compete for readers with news-lite filler—government and corporate press releases, cop-shop-blotter reports, traffic news, weather updates, celebrity gossip—rather than investing in uncovering news nobody knows, but might actually want to, and by reducing the number of their journalists and the quality of their journalism, thereby making them even less essential or attractive to readers.

None of that is to suggest even the most nimble, best-managed traditional newspaper publisher could have withstood the last two decades’ seismic shifts in technology and news consumption habits intact. But the reality of the debt-fueled merger march to monopoly and death has meant that even the financial survival of many individual newspapers is irrelevant to their overall survival.

As someone who began my own journalism career in smoke-filled, typewriter-clattering, mickey-of-rum-in-the-desk newsrooms where we—at least occasionally—produced important, I-didn’t-know-that, damn-the-consequences journalism, I am pained by the impending demise of the traditional newspaper.

As a journalism professor who spent more than thirty years watching bright young women and men transform themselves into fine journalists, and seeing many of them go on to meaningful careers in the business, including in traditional newspapers, I am sorry for their loss. I’m sorrier for the next generations of young reporters and editors who won’t get the same chance, and sorriest of all for those of us who will no longer have daily newspapers to collectively inform, enlighten, entertain, and irritate us.

And yet I’m also strangely encouraged. The more I see what’s happening with the newspaper business, the more I’ve begun to believe it may simply be necessary for the old to implode in order to make psychic and fiscal space for the new and, hopefully, better.

And there are, it seems to me, some optimistic better buddings in Canada’s nascent online media garden. For example, there’s iPolitics, an Ottawa-based, politics-obsessed site, which claims a “news team” of more than 30, many of them well-respected refugees from mainstream media, along with a sprinkling of fresh-faced reporters and editors; the National Observer, a Vancouver-based venture exploring news “through the lens of energy, environment and politics,” which boasts its own “climate change reporter”; the Tyee, also Vancouver-based and the winner of numerous journalism awards, including a 2013 Canadian Journalism Foundation Excellence in Journalism Award; and Rabble, a labour-supported progressive “news for the rest of us” site that funds its own Parliament Hill and labour beat reporters.

Each has its own business model, usually featuring some combination of reader, or foundation, or advertising support. It’s difficult to know how well any of them are doing, or if any will survive in the long term. The Tyee, in fact, acknowledges that, after twelve years, it’s “not yet profitable. Should it ever become profitable, the investors have agreed they would reinvest those profits into the publication.” What a pleasantly, un-shareholder-like conception of editorial mission.

There are other examples worth considering too. In my neck of the woods, for example, there is: allNovaScotia. Created in 2001 by serial journalism entrepreneur David Bentley, allNovaScotia is in many ways counter-intuitive—few graphics, no video, and you can’t even link to, repost, or tweet its behind-the-paywall content—but its top-notch newsroom of eighteen reporters and editors with their laser-like focus on provincial business and politics has not only made allNovaScotia a go-to news source for the province’s corporate and chattering classes, but it has also made itself a commercial success (subscriptions are $30 per month). The outlet recently opened a Newfoundland bureau, and may soon turn that into a spin-off standalone publication.

There is also the Halifax Examiner, an “independent, adversarial news site devoted to holding the powerful accountable.” Launched just over a year ago by investigative journalist Tim Bousquet—whose reporting on a municipal political scandal led our city’s then-mayor to decide not to re-offer and earned Bousquet and his former employers, the Coast alternative weekly, a Michener nomination for public service—the Examiner is completely subscriber funded, but mixes free content with material behind a paywall. Its latest project is a massive, five-part series called Dead Wrong about a “botched police investigation and a probable wrongful conviction [that] shed light on the murders of dozen of women in Nova Scotia.”

What makes these experiments worthy of note—and hope—is that they are motivated not only by a necessary desire for commercial success, or at least sustainability, but also by their founders’ commitment to actual acts of journalism that inform, educate, elucidate, and entertain.

Now that is a real sliver of silver lining.

Stephen Kimber (@skimber) is a professor of journalism at the University of King's College in Halifax.