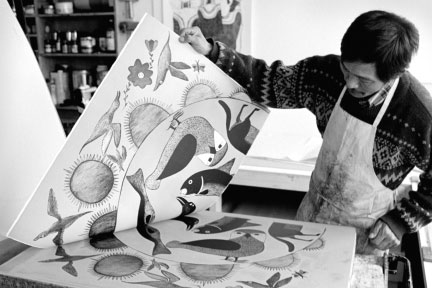 For thousands of years, the Inuit survived in the Canadian Arctic as a society of nomadic hunters. Increasing cultural exchange between the North and the South in the twentieth century led to a heightened awareness of the hardships of Arctic life. During the 1950s, the federal government developed a constellation of townsites along the Arctic coastline. The Inuit were encouraged to settle there in order to facilitate the supply of essentials such as food and fuel during the Arctic’s brief summer, as well as the provision of social services such as education and health care. People lived longer, and infant mortality went down.

The Inuit have always produced art. Historically, their art needed to be small and portable, so they created exquisitely detailed carvings and scrimshaw using the teeth and bones of the game they hunted. Their works could have spiritual significance—warding off dangerous spirits, improving the chances of killing game. They could also serve as personal adornments or as objects for pleasurable contemplation. As trade with the outside world grew in the nineteenth century, Inuit stone and bone artworks attracted avid collectors in both North America and Europe.

James Houston, who served from 1953 to 1962 as West Baffin Island’s first civil administrator, decided to encourage the Cape Dorset Inuit to make art as a way to earn a living. Houston’s experiment ignited a surge of creative activity as well as a flush of art-based prosperity. This led to the creation of the first Inuit-owned art marketing co-op. The West Baffin Eskimo Co-operative in Cape Dorset has been a financial and critical success since it was founded in 1959, and the co-op concept has since spread across the entire Arctic.

My interest in the Arctic centres on the very recent impact of a highly developed, modern, industrial culture on an ancient, isolated community of nomadic hunters. My photography focuses on the living and working circumstances of the Inuit art professionals whose livelihood developed with the onset of the town-based North.

When I was in Cape Dorset in 1998, I saw how much things had changed since my previous visit sixteen years earlier. The new houses were larger. Everybody had a flush toilet, hot and cold running water, a big television set, and a satellite dish. It was April, and the early spring weather encouraged young Dorset men to wear windbreakers and baseball caps. The multi-channel TV universe and the Internet had made their presence felt.

In my 1998 photo project, I was able to enlarge my collection of portraits of Dorset artmaking elders—people who made the first mid-1950s transformation from living on the land to professional artmaking. These portraits included Mary Pudlat, Latcholassie Akesuk, Osuitok Ipeelee, Kenojuak Ashevak, and Sheojuk Etidlooie. Mortality has taken its toll on the Arctic’s first generation of professional artists, and soon the last of the Inuit artists to be inspired directly by the memories of life on the land will be gone.

The 1998 trip also afforded me the opportunity to meet some of Dorset’s young artists, who are driving their work in entirely new directions. Suvinai Ashoona’s prints and drawings of mysterious, bleak, rocky landscapes have little to do with the lifestyles, myths, and spirituality that powered the art of her elders. The bones and stones in Arnaqu Ashevak’s constructions are from the land around him but his work is not about it.

The modern Arctic population has seen much change in a short run of years. Contemporary Inuit artists draw less and less on the ancient myths and spiritual concepts that nourished them for countless centuries. New Inuit art tends to be wildly diverse in form and very current, personal, and opinionated in content. Not surprisingly, we are already starting to see sharply political Inuit art coming out of the modern, urbanized Arctic.

John Reeves, a member of the Royal Canadian Academy of Arts, won a lifetime achievement award from the Canadian Association of Photographers and Illustrators in 2002. 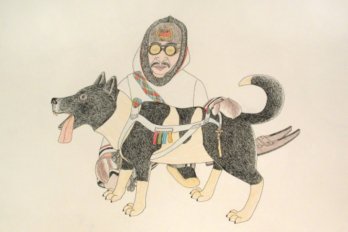