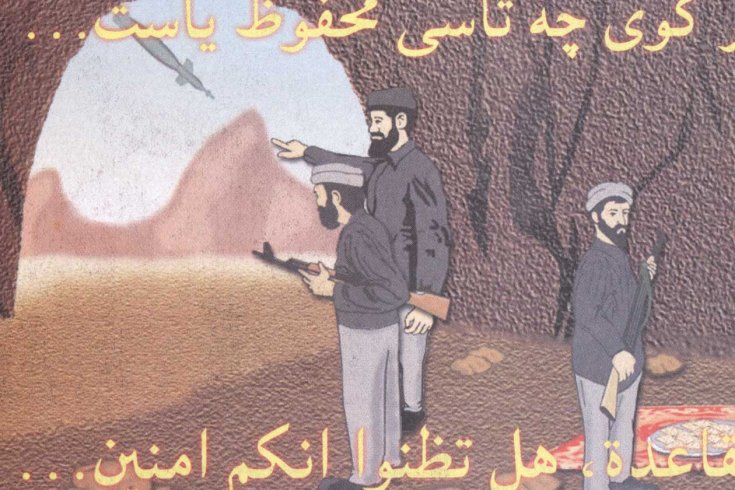 A leaflet prepared by the US Department of Defense for airdrop over Afghanistan as part of Operation Enduring Freedom. The front reads: "Taliban, do you think you are safe..." The back continues: "In your tomb?" | Library of Congress

There is a photograph, taken in Afghanistan on July 27, 2002, that shows a boy with the first wisps of a teenage moustache. His face, however, is a sickly shade of gray-green. His chest is torn open by two deep wounds. If you didn’t know better, you’d swear that Omar Khadr was dead. In later accounts of the events leading up to this moment, commentators would invoke the “fog of war,” the inevitable chaos of conflict. But there is a brutal clarity to this image of a fifteen-year-old Canadian shot after allegedly throwing the grenade that killed United States Army sergeant Christopher Speer. The picture is a reminder of consequences to the policy choices embraced by Western democracies—Canada included—to avenge the atrocities of September 11.

Khadr would soon suffer at American hands in an American prison. Canada’s unwillingness to intervene in his treatment and detention is the root of the recent $10.5 million payment awarded to Khadr by the Liberal government. The settlement, however, also gestures toward the broader strategic failing of the War on Terror.

To grasp the magnitude of the failure, consider the numbers. According to the US State Department, 423 terrorist attacks occurred worldwide in 2000, killing 405 people. In 2015, there were 11,774 attacks, resulting in 28,328 deaths. The most tangible results of fifteen years of fighting have been the creation of the Islamic State and the collapse of governments in Syria, Iraq, and Libya.

The military invasion and occupation of countries in the Middle East and Africa, indefinite detainment in extrajudicial prison camps, the justification and normalization of torture, contempt for domestic law and international conventions—these distinct yet interrelated signatures of the War on Terror converge in the case of Omar Khadr. At a moment when Canada is being asked to send troops back to Afghanistan, we need to think carefully about the legacy of our contribution to this border-spanning war, and consider whether our strategy has done anything to decrease the likelihood that a teenager from Toronto could be forced into foreign combat, taking up arms against the very values that our country claims to embody.

The tragedy of Khadr and Speer begins not with the pulling of a grenade pin in 2002, but with the radicalization of Omar’s father, Ahmed Said Khadr, during the 1979 Soviet invasion of Afghanistan. According to Michelle Shephard’s biography of Omar Khadr, Guantanamo’s Child, Ahmed had become “obsessed with the battle for Afghanistan,” and considered the Soviet invasion “a rallying call for the world’s Muslims . . . a call to jihad.” The Soviets entered Afghanistan for reasons that were partly ideological (to support the embattled Marxist People’s Democratic Party of Afghanistan) and partly strategic (to expand their influence in Southeast Asia and gain access to the Indian Ocean). To Ahmed Khadr, and the thousands like him who responded to the invasion, what mattered were the TV images of foreign tanks and troops flooding into the country. In 1994, Ahmed—who had been mostly secular when he had immigrated to Montreal in 1975—sent his two eldest sons, one thirteen and the other no older than twelve, to Khalden, a jihadist training camp. Young Omar, meanwhile, grew up visiting the bin Laden family in Jalalabad.

One can accept that the Soviet invasion of Afghanistan was a major driver of jihadist recruitment while clinging to the notion that the NATO invasion and occupation (and Canada’s role in it) was somehow fundamentally different. After all, far from an attempt to exploit regional advantage, Canada’s civilian operation aimed to improve the lives of the Afghani people. Why else did we lead the refurbishment of Dahla Dam, build fifty-two schools, and vaccinate 386,690 children against polio?

Of course, there were many countries around the world where Canada could have been building infrastructure and vaccinating children, and only one country where such efforts were required to provide humanitarian justification for a counterinsurgency operation. Stephen Saideman states the obvious in his book Adapting in the Dust: Canada had “no intrinsic interests” in Afghanistan. Along with the other NATO member states, we were there to support the US. Ever since Canadian Special Forces first entered the country as part of Operation Enduring Freedom in 2001, more than 91,000 Afghans have been killed in the war, including 26,000 civilians. Canadians may prefer to dwell on the gifts we bestowed upon the people of Afghanistan, but the gifts we furnished the Taliban may prove more lasting.

When it comes to instruments of jihadist recruitment, however, few can compete with the prison that housed Omar Khadr for more than a decade. Former president Barack Obama said that Guantanamo “undermines our standing in the world. It is viewed as a stain on our broader record of upholding the highest standards of rule of law.” Former CIA director and military general David Petraeus argued that the images that emerged from facilities like Guantanamo and Abu Ghraib are “non-biodegradables. They don’t go away.” Khadr, who went on hunger strikes while detained, was even used as a propaganda tool for the Taliban.

While other countries chastised the Americans and fought to extract their nationals, Omar Khadr is living proof that Canada, in the words of the Supreme Court, “actively supported” an “illegal regime.” Indeed, news reports from 2010 suggests that ranking officials in the Obama administration (who were uneasy about prosecuting a child for war crimes) were quietly pressuring Canada to repatriate Khadr, though the Harper government dragged its feet for another two years before permitting him to return.

Canada now finds itself at a crossroads. The Khadr settlement was meant to provide a sense of closure, but the underlying problems that Khadr’s case represents continue to worsen. Under pressure from the Trump administration, the Liberals committed to a 70 percent increase in its defense budget over the next decade. The goal is to give Canadian diplomacy and development efforts “the backing of hard power,” as foreign minister Chrystia Freeland said. Canada is also being asked to contribute to a NATO “mini-surge” in Afghanistan, and Trudeau has mused about sending troops to northern Iraq. We now need to ask hard questions about the uses of our “hard power,” and confront the fact that our recent exertions of that power have come at a cost of trillions of dollars and a nauseating number of lives.

Yet rather than confront the epochal failure of the War on Terror, some, like Conservative MPs Michelle Rempel and Peter Kent, prefer to talk about the comforting fantasy that Khadr’s example reveals only his unique moral defects: that he chose the life of a terrorist, and that his settlement payment is therefore offensive to Canadians and our allies. This line of thinking—seemingly part of a calculated political gambit to sow division and inflame passions—will quicken the self-destructive spiral in which we are currently trapped.

While it would be ludicrous to suggest that Canada “caused” any individual act of terrorism, Omar Khadr has become the name of a problem that Canada has failed to solve and helped to exacerbate. The government has now apologized to Khadr. Whether we have learned anything from him, however, is debatable.