No One Can Hear You Scream | The Walrus
Skip to content 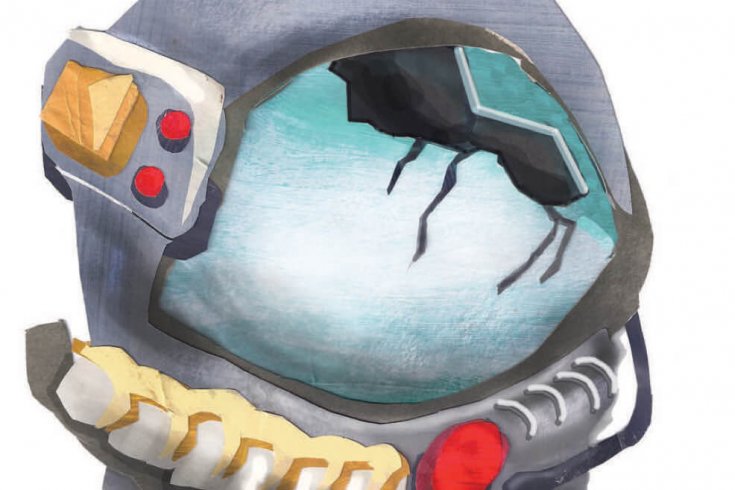 In April 1961, Leonid Ivanovich Rogozov, the sole physician on the sixth Soviet Antarctic Expedition, fell ill. In just a few days’ time, nausea and fever gave way to what he described as “a snowstorm whipping through my soul, wailing like a hundred jackals.” It was acute appendicitis, and the prognosis was death unless the offending tissue was removed; unfortunately, the crew was stranded at the bottom of the world during the fierce polar winter. The only option was to self-operate. With two untrained comrades assisting as best they could, Rogozov injected himself with novocaine and cut into his abdomen. An hour and forty-five minutes later, he sewed himself up, and by the following spring he was back in Leningrad, safe and sound.

Polar expeditions are as remote as you can get on this planet; add hundreds of millions of kilometres, and you can imagine how perilous a mission to Mars would be. Space travel entails hazards ranging from run-of-the-mill internal organ rupture to solar flares, whose radiation can break dna molecules and spell certain death for crews in deep space. Then there’s micro-gravity, which can cause bone demineralization and muscle loss; and decompression sickness, which can trigger illness or death. And that’s just the physical. Imagine cabin fever on a three-year mission to the red planet: confined in a small space with a small crew, engulfed in the blackness of space, astronauts are susceptible to extreme anxiety, depression, and possibly psychosis, any of which could easily jeopardize the mission. In other words, as human technology advances and astronauts venture farther from Earth, human vulnerability has become the space program’s greatest limitation.

“It’s a double-edged sword,” says Christian Otto, a Canadian physician and nasa scientist. “As a species, we’re driven to go beyond the next hill, go beyond the next mountain, search out new environments. That’s worked very well as a survival strategy on this planet. However, that need to explore is pushing us into environments that are not consistent with our evolutionary biology.” Consequently, space travel would be impossible without space medicine, of which Canada has long been at the forefront. To date, this country’s greatest contribution has been personnel: the flight surgeon for Apollo 11, the first moon landing, was the Canadian Dr. Bill Carpentier; and several Canadian doctors, including Otto, have worked for nasa since.

Dr. Hubertus Strughold (1898–1986), the so-called “father of space medicine,” was the head of Germany’s Air Force Institute of Aviation Medicine during World War II, and has been linked to experiments in which Dachau inmates were subjected to extreme air pressure and temperature. After the war, Strughold came to the US with a group of German scientists brought over to bolster the American nuclear and space programs, an initiative known as Operation Paperclip. He went on to help develop the spacesuit; regardless, he was expelled from the International Space Hall of Fame in 2006 for his Nazi affiliations.

But nothing can prepare even the most intrepid astronaut for the physical and psychological trials of life on Mars—nothing, that is, except an approximation of Mars on Earth—and that’s where Canada has made its most significant non-human contribution. Devon Island, located in Canada’s High Arctic, is massive and uninhabited, with a harsh climate; a barren, rocky terrain; and a meteorite impact crater. For ten years, it’s been home to the Haughton-Mars Project, the only polar research station whose raison d’être is to support space exploration. “The first year I was there, Pascal [Lee, hmp’s director] took me on a tour down into the crater,” says Otto, “and if it weren’t for the fact that you’re breathing air, you would actually think you were on Mars.”

In the future, crews will spend anywhere from six months to two years at HMP in total isolation, living as they would on that planet: wearing spacesuits, doing real fieldwork, and communicating with “Earth” with appropriate time delays. “What we’re talking about is giving crews very tight quarters and an ambitious program of exploration,” says Lee. “If you test a spacesuit in a parking lot, you might bend down one time to pick up a rock and conclude you can collect rocks in your spacesuit. But you have to hike up a hill in your spacesuit. You have to collect not one rock but ten, and you need to bend down twenty times per hour until you find one good sample.”

Meanwhile, researchers on Devon Island are busy preparing for the worst. Were an astronaut to require surgery on Mars, it would fall to a crew medical officer to operate under the direction of a flight surgeon at mission control. Communications could take up to twenty minutes to reach either side, so surgical procedures would have to be divided beforehand into sub-tasks, each requiring approval from the ground. A lot could go wrong, but in 2008 Otto (who is not a surgeon) staged an appendix removal on Devon Island under the supervision of a surgeon in Detroit, proving that the operation could be performed without a hitch.

But the most important element of space medicine is sending the right people in the first place—the astronauts with the highest emotional intelligence, and the most likely to get along. A traveller has to be sound of mind to make it out there: “My work has seen a change in the brain as a result of prolonged isolation and confinement,” says Otto, who has overwintered in Antarctica. “What we are seeing are neurostructural changes in the brain as a result of this profound sensory deprivation and social isolation.” Confining potential candidates in isolation will tease out social dynamics, helping space researchers to determine what kind of person can handle the pressures of a remote environment, as well as what personality mix is most conducive to co-operation.

In the end, it was a scalpel that cut through Rogozov’s tissue, but he survived by his steely determination. Human vulnerability may be the limiting factor to space exploration, but human ingenuity and courage are what will take it farther than we ever thought possible. “We’re on the eve of a great age of exploration,” says Lee. “It’s not just about the equipment; it’s about the people we send.”

A Nineteenth-Century Pandemic May Be a Window into Coronaviruses