New Waves | The Walrus
Skip to content
As Japan’s tsunami debris washes up on the BC coast, beachcombers consider the meaning of the refuse

In March of last year, after a violent spring storm, Sheila Williams took her long-legged Afghan hound, Saffy, out for a walk on the Wild Pacific Trail near Ucluelet, on the southwestern tip of Vancouver Island. Off the trail, at the end of an unmarked path in an unnamed cove, they found a white and blue rubber house slipper with Asian characters. Williams wondered if it could have made its way from the tsunami-ravaged east coast of Japan, and headed to an Asian supermarket to ask for a translation.

A few weeks later, the ghost ship Ryou-Un Maru was spotted off the BC coast, just one wreck among the estimated five million metric tons of debris washed into the ocean from Japan by the 2011 tsunami. About 30 percent of that flotsam now drifts across an area in the North Pacific roughly three times the size of the continental US (the rest sank). It is impossible to know when, where, or in what quantities the debris will land on the west coast of North America, but the US government’s National Oceanic and Atmospheric Administration predicts that it will begin arriving en masse with the early winter storms of this year.

Williams and I returned to the cove a few months later. As we made our way through the dense forest, the mud, wet from the near-constant rain, sucked at our shoes. With a nimbleness that belied her sixty-eight years, Williams clambered over a wall of driftwood and onto the cove’s surf-pounded black rocks—the kind of secluded place rum-runners favoured during Prohibition. A carpet of shimmering clamshell shards crunched beneath our feet. Crushed pop bottles caught in dark, algae-lined rock pools. Some shapes were familiar to me, resembling the unsweetened iced green tea I used to guzzle when I lived in Japan.

What happens when the post office fails to deliver 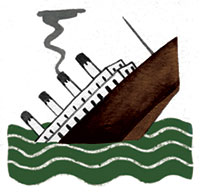 The study and collection of interrupted mail is an obscure but competitive branch of philately. Old return envelopes, or “covers,” are sought after for their dead letter office stamp marks (“strikes”) and their reasons for interruption. The Wreck & Crash Mail Society in the United Kingdom, for example, specializes in missives from disasters: documents found amid the wreckage of RMS Titanic and the Hindenburg can command tens of thousands of dollars. In Canada, collectors have paid handsomely for the “wreck mail” covers used to return letters from RMS Empress of Ireland, which sank in the St. Lawrence River in 1914. They arrived from the Ottawa dead letter office with the water-faded strike “Recovered by divers from wreck of the Empress of Ireland.” The standard return fee was waived, a policy implemented for shipwrecks, and during wartime when the addressee had been killed in battle.

The bottles reminded me of another shoreline on the other side of the Pacific, in Shichigahama, Miyagi Prefecture. As part of the relief effort, I spent a day digging up ocean silt and readying the area for resettlement, five months after the three-metre tsunami crashed through this beachside town. Entire neighbourhoods had been lifted inland, and I could still see the remnants of houses scattered through farmers’ fields nearby. Our volunteer crew sifted out layers of broken glass and knick-knacks, bagging them and sending them off to a mountain of trash across the valley. Beneath the layers of sand, I came across a prayer bracelet of clear glass beads. When I handed it to our volunteer supervisor, he laid it on a house foundation, unsure what to do with it. So much had been displaced; it was hard to know where to start.

On Vancouver Island’s shores, Japanese debris is not a new phenomenon. One member of the Ucluelet First Nations, whom I met at a nearby campground, recalled the glass buoys his mother would find on the beach, washed up from Japanese fishing boats. She would wrap them in macramé and hang them from the ceiling. They looked like so many planets orbiting through a solar system.

The difference now is one of quantity. “When you actually look at the amount of refuse up and down the coast, it’s quite phenomenal,” says David Leverton, a geographer who spent the summer of 2012 monitoring the debris. “I really hope this is a wake-up call,” he says. “What happens on the other side of the world can have an immediate impact here.”

The issue is not just what to do with so much garbage, he says, but also what it might mean: the new wave of debris serves as a concrete symbol of one of the worst natural disasters in recorded history. “What would happen if my entire house was swept into the ocean? ” he asks. “How much of it would end up sinking immediately, and how much would end up floating to the other side of the world? ”

Many West Coasters have posted photos of their found objects on the museum’s Tsunami Debris Project Facebook page, hoping to trace them back to their origin. A few items have been identified. A motorcycle that washed up in Haida Gwaii and now sits in the Harley-Davidson Museum in Milwaukee, Wisconsin, was found by a beachcomber and traced back to Miyagi Prefecture with the help of the Japanese consulate. Residents of Craig, Alaska, managed to return a basketball to its middle school in Kesennuma. But most of the debris is like that prayer bracelet I found in Shichigahama: untraceable.

Despite its long journey, Williams’s slipper arrived startlingly intact. The logo may be Chinese and the characters could have several meanings, but sandals like it are common in Japan. Williams is no closer to knowing its provenance: it could just as easily have been dropped off a boat as sucked away by the tsunami. She may never know. Detached from its context, it becomes a memento mori, a reminder of the fragility of life on the coast.

Erika Thorkelson is a freelance journalist and culture critic living in Vancouver. She teaches humanities and writing at Emily Carr University of Art and Design.