Name of the Game | The Walrus
Skip to content 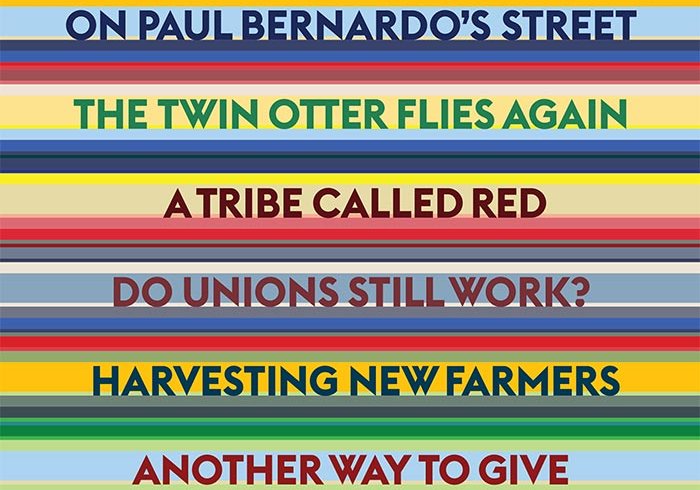 Hey, careful there! You nearly stepped on me. Probably didn’t see me, did you? Ghostly, insubstantial, unremarked. Welcome to the lonely lot of the author pseudonym. Hell, I’m not even a real person. I’m a faceless name. A smokescreen. A purgatorial shade drifting amid the fully fleshed. An opaque balloon filled with angst and lies.

Picture it, friend: you don’t exist and then, in one cataclysmic instant, poof!, there you are. No blood ties. No childhood. No history at all. Kindled into existence in whole cloth. A Pseudo.

Nick Cutter. For Chrissake, what kind of name is that? One that’s tailor made for a writer of horror fiction, which is the section of the bookstore where you’ll soon find the book bearing my name. Or maybe (ye gods!) on the drugstore spinning rack, shelved beside the paperbacks with lurid covers depicting skeleton cheerleaders and knives dripping with gore. Which is why my chickenshit father created me.

Sometimes I’ll get pissed and phone my father’s agent.

“This is Cutter,” I’ll growl. “I want to talk to the pissant who helped breathe me into existence.”

Dutifully, my father’s agent will get on the blower. “Hello, Nick,” he’ll say in that dry, faintly amused way of his. “What’s the rhubarb? ”

“Don’t play patsy with me, pal. I want answers.”

He’ll fetch up a bemused sigh. “Your father wanted to write something different. A book he was passionate about, but which marked a departure from the more literary work he’d published under his own name. We thought it might disorient readers, yes? It was key to have that separation: Nick Cutter’s books in this box, the other books in this other box.”

“Nick, it’s your box,” he’ll say soothingly, as if addressing a thumb-sucking infant. “Everything inside of it belongs, at least partially, to you. You should be happy! Think of yourself as an alter ego—”

My father, tapping at his keyboard in the other room, will overhear and say, “Don’t be a bother, Nicholas”—and I’ll know he’s serious, because he’s using my full name.

Whatever. I’ve got my dad’s number. He thinks he’s edgy, a real maverick. Okay, so he’s edgy by CanLit standards, but so what? That’s like being the youngest guy at a CARP convention—a pretty low bar to clear. And if he’s so edgy, why not publish this horror book under his own name? I’ll tell you why: because he’s aquiver with fear that he’ll be cast out from the mothering bosom of the literary world—a world that’s never really embraced him anyway. Why does he care what a bunch of snobby, uptight stooges think as they moulder away in their faculty lounges and antiquarian bookshops? Why doesn’t he cowboy up?

I’d settle their hash myself, but what agency do I have? Not one damn thing about me is my own, or even marginally original. My clothes, for one: black pants and shirt, a black trench coat. Stereotypical attire for a horror writer. My hair is long and dark, cowling—yes, it cowls!—my pallid, arrow-shaped face. My eyes, of course, are inky.

Sometimes I’ll think, Hey, I’m feelin’ zany! Let’s throw on a Hawaiian shirt! But when I open my closet, all that’s hanging there are black pants, shirts, and trench coats. If, in a fit of ennui, I hack at my hair with a pair of scissors, the locks metamorphose into hissing black vipers that vaporize in gouts of stinking smoke—cool, sure, but it puts a makeover right out of the question.

Worst of all is this sense, subtle but profound, that my thoughts are not my own. My life is fixed on rails, and no amount of effort or determination can alter the terrible precision of its trajectory. Does my father offer one word of sympathy? Hah! I’m a nagging thought at the back of his mind, a heart under the floorboards beating out a single word: Fraud! Fraud! Fraud!

I want to shout: Notice me, Dad! I’m my own person—I EXIST! You want to talk about screaming into the void?

I shouldn’t grumble. That’s what my PA sponsor says. It’s a sweet gig, he’s always telling me. I don’t have to lift a finger. Marvellous. Be a coattail-riding sponge. Whoop-de-ding-dong, what a life!

My sponsor’s name is Lemony Snicket. Perhaps you’ve heard of him? Lemony’s not only part of a fantastically popular series of books in which several Unfortunate Events transpire, but he’s also an active participant in his books, the narrator, which makes him the envy of every sad sack at PA.

One day, Lemony held forth rather Byronically on the story of his creation.

“Whilst researching his first novel, my father, Daniel, was on the phone with a right-wing organization. He wanted their materials but didn’t want to be on their mailing list. The woman asked for his name, and Daniel said the first crazy thing that popped into his head: my name. Years later, with the name dusty from disuse, my father put it back into service.”

Lemony’s father thought it would be interesting to publish the books under the name of the narrator rather than the author, as a way to keep the mystique of the books intact. He prefers to identify himself as “Mr. Snicket’s representative.” How awesome is that?

My father, not so much. He figured horror writers ought to have punchy, zippy names. Stephen King. Clive Barker. Et cetera. News flash, Einstein: those are their real names. Mine sounds patently fake. Why not Slice Hacker, or Slash Chopper? King’s own choice was much classier: Richard Bachman. And when King’s son, Joseph Hillstrom King, inherited his father’s passion, he decided to adopt the pseudonym of Joe Hill, worried that his father’s influence would assure him unearned opportunities. He actually chose to make the path harder.

Ultimately, though, it makes no nevermind how great your father is—a point driven home every week at PA: Pseudos Anonymous. The killing irony being, we’re already anonymous. Might as well call it Anonymous Anonymous, right? Just like the ole Double-A.

The set-up is the same, too: a tiny room with some plastic chairs, gut rot coffee, stale macaroons on a paper plate. All of the heavy hitters are there. Geoffrey Crayon, Pittacus Lore, and J. D. Robb. Mystery writer Edgar Box, looking stuffy and hair trigger at once. Anne Rampling, gothic and sultry. Alan Smithee (a.k.a. Artistic Whiteout), with his hangdog expression.

We take turns at the lectern, unburdening ourselves of spiritual malaise. Last week, Richie Bachman trotted out his tired old wheeze.

“Nineteen seventy-seven to 1985: those were the salad years. Thinner, Rage, The Long Walk. Damn fine books! I didn’t write them, but their light shone upon me. I had a wife, a life. So what if my father created me to off-load the mealier fruits of his copious imagination? Back then, the thinking was that publishing more than a book a year would oversaturate the market. I was the release valve.”

He grew mopey and wiped his perpetually runny nose with a checkered hanky.

“Then one day the jig was up. Daddy didn’t need me anymore, so he tossed me on the junk heap.” Over in the corner, Edgar Box rubbed his thumb and forefinger together, playing the world’s smallest violin. “Enjoy that time in the sun, you guys,” Richie went on. “Before you know it, the boogaloo will be through, and you’ll be left feeling bluuuuue…” He held that final note, a low, mournful sound that bounced off the walls like the wail of a lost hound.

The airless room can get pretty packed. More writers than you’d think use pseudonyms. Heck, some use more than one. Dean Koontz has ten of them, including John Hill, K. R. Dwyer, Deanna Dwyer, David Axton, Anthony North, and Aaron Wolfe. They all show up at PA together, hands tightly clasped like children playing a game of Red Rover.

We had a new member show up not long ago. Bit of a stunner. Handsome English lad, nattily attired if a bit spacey. He had that telltale “new Pseudo” look: wide eyed and twitchy, as if his skin was fitting too tight. Said his name was Robert Galbraith, then shuffled behind the lectern, adjusted his spectacles, and spoke haltingly.

“Erm, yes, hullo. Where to begin? I’m still not sure where I properly begin. It’s still a shock to simply…be. My mother is kind of a big deal; she created this boy wizard named Harry Potter. Anyhoo, she wanted to write a grown-up detective series, but was concerned her fame would prevent it from being judged on its own virtues. Then somebody tattled her secret to the world. Now Mummy is on and on about her trauma, but what about my trauma? I’m trying to keep a stiff upper lip, but…but…”

His lips quivered, then he started to weep. And sure, we Pseudos can be stony hearted, but we all remember what it was like—that flashbulb pop, followed by a flood of confusion and fear. We enfolded him in a group hug. It’ll be okay, we whispered.

Listen, I know the score. Our moms and dads are desperate. Maybe they’ve hit a dead end and lost the faith of publishers. Their name is mud, and a pseudonym is their universal cleanser. Or they want to distance themselves from a successful parent. No history, no baggage. And maybe it really all simmers down to the fear of exposing one’s true face—or one of many, at least, like the one lurking behind a book about, say, a troop of Boy Scouts terrorized by a mutant superbug on a remote island off the coast of PEI.

Sometimes when I sleep, I’ll have this dream. My father and I stand side by side as my fame slowly eclipses his own. My books find success while his flatline. I grow bigger, my body solidifying, while his shrinks and turns chalky. This all occurs with the fluttery motion of time-lapse photography.

Just before the dream ends, my mini-fied father looks up at me and, in a tinny voice, yells:

I lift my foot and bring it down, hovering overtop him as if to squash him…

Nick Cutter is a pseudonym. His horror novel The Troop will be published in February.
Rachelle Maynard

Rachelle Maynard is an art director at Black Cat Advertising and a past contributor to the New York Times, the Washington Post, and The Walrus.