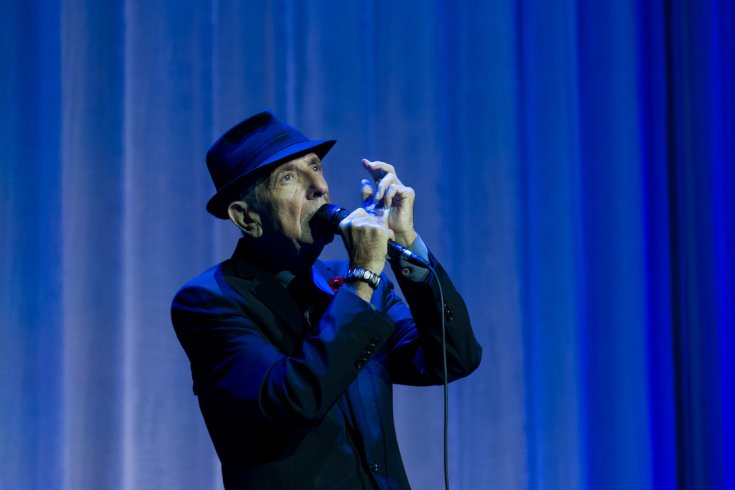 Montrealers didn’t paint the town red in memory of Leonard Cohen, but in early November, on the first anniversary of his death, they came close to dressing up the whole city in black and white. At Pierre Elliott Trudeau International Airport, the image of a fedora rose up above the letter O in the city’s metallic name on the terminal building. On Crescent Street in the alcohol-fuelled heart of downtown, a tall grey-scale mural was unveiled on a nondescript apartment block, with a courtly-looking Cohen placing his right hand across his heart. (On Saint-Laurent Boulevard, closer to the singer’s Montreal home, a different Cohen mural had gone up in the summer.) A few of the singer’s words were illuminated in giant white capitals on a silo in the Old Port. There was even a quasi-official karaoke event in the Place-des-Arts metro station. If not all of the participants were blessed with the gift of a golden voice, well, neither was Leonard Cohen.

As the centrepiece of what it doesn’t seem quite right to call “festivities,” the city’s Musée d’art contemporain (MAC) has just opened Leonard Cohen: A Crack in Everything, a wide-ranging show of Cohen-inspired visual art, films, music, and dance that will remain on display until April. “This was never a sycophantic exercise,” explains John Zeppetelli, the director and chief curator of the MAC. “It’s about the magnificent cultural presence he embodied for five decades.” (As Cohen’s first book of poems, Let Us Compare Mythologies, appeared in 1956, and his final album, You Want It Darker, came out just before his death in 2016, six decades would have been more accurate.)

It’s been three years since Zeppetelli and his co-curator, Victor Shiffman, approached the singer’s lawyer and manager Robert Kory with the idea of a show. As Kory tells it, he informed his client what the Montrealers were aspiring to create—a celebration of Cohen’s impact and influence on artists working in many genres—and received a cautious go-ahead: “OK, fine. But tell them I won’t be at the opening.” Kory drily adds, “Leonard was extreme in keeping his promise.”

What’s immediately striking about the MAC show is the international background of the twenty or so artists whose work is on display: an Israeli film director, a Hong Kong video artist, a German photographer, a British filmmaker, a South African installation artist, and so on. It’s hard to imagine this kind of global response to the work of any other Canadian artist, past or present. “Of course I’m a big Leonard Cohen fan,” says Ari Folman, the Israeli director. “Everyone is.”

But perhaps the most challenging and substantial work in the show is by the American artist Michael Rakowitz—and what makes it stand out is that while Rakowitz is indeed a fan of Cohen, but an angst-ridden, tormented one. Rakowitz is an anti-Zionist Jew, angered by the suffering inflicted on Palestinians, and in a film and archival display entitled “I’m Good at Love, I’m Good at Hate, It’s In Between I Freeze,” he confronts Cohen’s eager participation in Israel’s Yom Kippur War of 1973 “as a kind of warrior poet.” The archival installation includes a stone that Rakowitz took from near the grave of the great Palestinian poet Mahmoud Darwish—now placed on top of a chunk of bedrock from Cohen’s childhood home in Westmount.

While the singer’s disembodied voice now echoes throughout the MAC—the show could have been called “Songs From Several Rooms”—another standout piece puts the human body front and centre. “When Even The,” created by the Montreal actor and choreographer Clara Furey, juxtaposes a lead sculpture of a human corpse (the sculptor is the tough-minded British artist Marc Quinn) with a transgressive dance by Furey herself. Her inspiration, and the title of the piece, was a Cohen poem in which, unusually, the poet’s familiar irony and two-mindedness extends to the very syntax. “This work explores the sensuality of death,” Furey says. “And also life. It’s an attempt to be in conversation with Cohen’s Zen practice.” As a homage, her work is both original and provocative.

Several of the films and installations aim to recreate Cohen’s presence: a vivid but ultimately futile gesture, popular though it will be at the MAC over the next five months. It’s the Sanchez Brothers, a pair of young Montreal artists, who succeed best at evoking the man’s absence. In their haunting installation “I Think I Will Follow You Very Soon,” they recreate a room in the singer’s Los Angeles home. A guitar case lies on the floor near an empty chair. A keyboard, a bench, a single lit lamp: everything appears normal. All that’s missing is the owner of these objects. Through a window at the end of the room, you can see a holograph of cars moving, night falling, and a fedora-clad man, his back to the viewer, sitting and gazing at the passing scene. Stand and watch long enough, and the holograph of Cohen will turn to face you. It’s a startling experience.

In 2003, before his decades of depression finally lifted, Cohen made a series of casual, impromptu self-portraits. Step into another of the exhibition’s small rooms, and you’ll find some of these self-portraits projected onto a pale wall. “What’s fascinating about them,” Zeppetelli suggests, “are the annotations.” A few of them are poems, others a mere notation of place and date. To me the most poignant—alongside a drawing of the artist’s aging face, full of bleak surprise—reads: “For a second or two, I forgot who I was.” Then memory returned.

The MAC show is sponsored by the CBC/Radio Canada, and at the show’s impossibly crowded opening, CBC president Hubert Lacroix gave a brief speech. “For me,” he said, “when I think about this iconic artist, it’s all about the words.” That perception may be shared by some of the artists in the show, but I don’t think it’s true for most of the viewers. Cohen’s unique appeal stretches far beyond his songs, even “Suzanne” and “Hallelujah;” it has to do with the cultivated mystique of a world-weary, knowing tenderness that suffuses his work and that somehow enables great numbers of people (artists in particular) to imagine a private affinity with Cohen. The show includes a video performance of a song written after his death by his longtime friend and collaborator Sharon Robinson, “Goodbye Stranger.” It’s a suggestive title. But the song includes the lines, “To those who know the longing / You’re really no stranger at all.”

Montreal’s mourning for Cohen, and the current celebrations of his work, are very different from the public grief that emerged elsewhere in the country following the death of Gord Downie. Many English Canadians were indifferent to the sophisticated melancholy of Cohen, just as many Quebecers had never even heard of Downie or the Tragically Hip—the calls for a national Gord Downie Day meant nothing to them. Cohen, by contrast, continues to mean a lot. (Public commemoration of him in Montreal is not even slightly controversial in the way that Mordecai Richler continues to be.) Even though Cohen made his home in Los Angeles, he remained a Montrealer at heart and he chose to be buried here. At the anniversary tribute concert, “Tower of Song,” held at the Bell Centre just before the MAC show opened, his son Adam said—in French—“My father was very suspicious of people who didn’t like Montreal.”

One of the numbers Adam Cohen performed was “The Partisan,” a song about the French Resistance that his father recorded decades ago in a mixture of English and French. He shared the Bell Centre stage with the brilliant Irish singer Damien Rice and the Quebec chanteuse known as Coeur de pirate. The trio formed a perfect symbol of Leonard Cohen’s enduring transnational appeal. So did the audience itself—people lucky enough to obtain tickets had flown in from abroad to attend. “As Quebecers, we could hear and feel through his songs a little bit of our story,” said Sophie Grégoire Trudeau, the prime minister’s wife, as she and her husband stood onstage below a black-and-white image of Leonard Cohen high up in the rafters. But she added, “He belongs, and will always belong, to the world.”

Mark Abley is a Rhodes Scholar, a Guggenheim Fellow, and the author of more than a dozen books of prose and poetry.

The International Tempest Over the World’s Most Famous Teapot