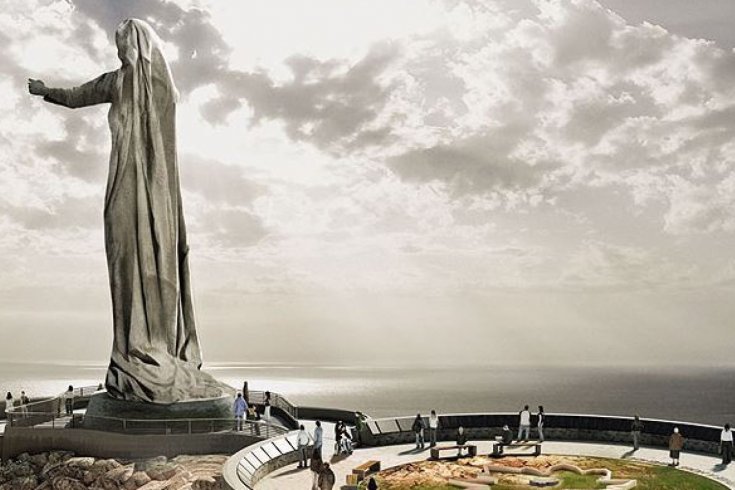 In a country where embarrassing displays of false earnestness are a national pastime, there are few displays more embarrassing or earnest than Mother Canada, the proposed $25-million, twenty-four-metre grotesquerie in Cape Breton Highlands National Park. Artist’s renderings show an unfortunate behemoth, her arms extended to the sea as if begging for a watery death, the sun gauzy and trite through the Maritime clouds; one presumes that a string section swells stirringly in the background. It would come as no surprise if Michael Bay were listed among her designers.

Opposition to Mother Canada is, needless to say, widespread. The Globe and Mail‘s editorial board called it a “hubristic act of arrogant unoriginality”; Valerie Bird, a ninety-three-year-old World War II veteran and Cape Breton resident, told the Guardian, “I think the idea of this horrible thing offends veterans. I find it difficult to find words. This is a monstrosity.” Some critics have questioned the environmental impact of a massive tourist site in a pristine national park, which seems a little high-minded. The real problem is that Mother Canada is hilariously ugly and unintentionally hilarious.

Mater Canada is intended to honour Canadian soldiers buried overseas, a goal that would be noble enough were it not for the fact that the Never Forgotten National Memorial Foundation, the private group behind our fair lady, has attracted the ire of the Vimy Foundation. There is already a statue, Canada Bereft, which is at Vimy, was built in 1936, and is colloquially known as Mother Canada—a stupid name to begin with (I mean, Mother Canada? Christ.), but let’s put that aside for now.

This anecdote, from a CBC story about the ongoing PR battle between poor Mother Canada and her many, many, many detractors, should tell you all you need to know. Vimy Foundation chairman Christopher Sweeney contacted Never Forgotten, asking it to change Mother Canada’s name—and got back a lawyer’s letter in response. “Basically they had trademarked the term Mother Canada and were applying it to merchandise that’s going to be associated with this Never Forgotten monument that’s planned for Cape Breton,” he told the CBC.

Um. The Never Forgotten National Memorial Foundation was so pleased with “Mother Canada” that it trademarked the name and is going to sell merchandise. At a war memorial! There’s no more fitting way to celebrate freedom than by buying a Mother Canada Fleshlight, I guess, but still—the whole thing smacks of self-satisfied national chauvinism, a Trump-like monument to the wealth and ego and political connectedness of Mommy Canada’s almost-famous supporters, who include Rex Murphy, Peter MacKay, Jean Charest, and many other angry white men.

Ultimately, this statue represents the Canada that Stephen Harper built: a privately funded war memorial on public land; a pale, gaudy knock-off of something European; a hoary paean to a mythologized past; the Statue of Liberty’s forgotten stepsister. Mother Canada is a Harper photo-op in the Northwest Passage; she is MacKay using a search-and-rescue helicopter for a fishing trip. Perhaps, then, she should be erected after all—a middle finger to the world, jutting phallically from the edge of the country. If nothing else, Mother Canada is the megalith we deserve.

* An earlier version of this piece implied that the Vimy Foundation was responsible for Canada Bereft. In fact, the statue is overseen by the Canadian government.