Mocking the Men with Guns | The Walrus
Skip to content 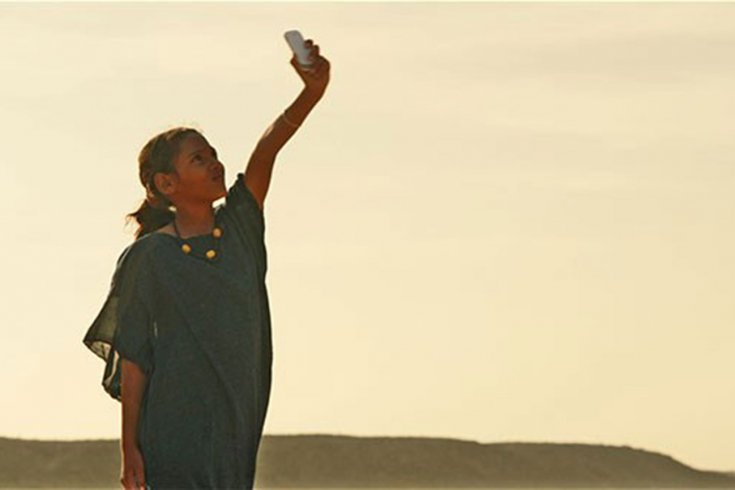 “Here come those men that I dislike.” These words, from a young girl in Mauritanian director Abderrahmane Sissako’s excellent new drama Timbuktu, neatly encapsulate a film portraying the takeover of a village in Mali by an Islamist militia. (The events in the film are fictional, but inspired by the 2012 occupation of Timbuktu by Islamic fundamentalists). Twelve-year-old Toya (Layla Walet Mohamed) lives on the outskirts of the city with her mother and father, who project a casually wary vibe about the intruders in their midst. As the film goes on, their apprehension increases. They caution their daughter to keep her distance. But it’s clear that maintaining any kind of separation is difficult when a whole community is overrun by religious extremists with guns.

Driving through the narrow city streets in jeeps, brandishing semi-automatic weapons and Shariah law edicts, the jihadists preside over the city as authoritarians. We learn that they’ve banned soccer, leading to an unforgettable sequence in which a group of boys pantomime an entire game—a co-operative group fantasy that recalls nothing so much as the imaginary tennis game in Michelangelo Antonioni’s 1966 cult classic Blow-Up. In that film, the choice to play with an invisible ball was an intriguing mystery; here it’s an act of defiance.

Sissako, who always has balanced his social conscience with a stridently comic sensibility, frames the Islamists as figures of fear, but also of mockery. If they suspect that the village’s inhabitants are abusing them behind their backs, it’s because they are. In the best of Timbuktu’s many subtle visual jokes, one of the group’s leaders, a severe-looking man in his forties, is shown being taught how to drive by a much younger comrade, and ends up doing doughnuts all over the dunes—like a nervous teenage boy trying to get his learners’ permit.

At this particular cultural moment, with journalists and artists of all stripes agonizing over the best way to challenge religious fundamentalism in popular media, Sissako’s film (which is nominated for Best Foreign Language Film at this month’s Academy Awards ceremony, and competed for the Palme d’Or at Cannes last year) seems like a bold stroke. In a review of Timbuktu for Tablet, J. Hoberman points out that the same week in January that Charlie Hebdo was restocked on Parisian newsstands following the murder of its staff members by Muslim-identified gunmen, Timbuktu was yanked from movie theatres in the Parisian suburb of Villiers-sur-Marne on the grounds that it offered “an apology for terrorism.”

It was a foolish edict—handed down, movie unseen, by the district’s mayor. But the episode also shows how difficult it is to depict Islamists with the nuance required of sophisticated, character-driven filmmaking.

One major talking point for members of the left in the aftermath of the Charlie Hebdo murders was that the magazine’s stated commitment to satirical fearlessness—for scribbling truth to power, one bug-eyed caricature at a time—dovetailed a little too closely with xenophobic attitudes in France and the rest of Europe toward its Muslim population. By prodding and mocking the actions of religious extremists, the magazine was painting a diverse set of religious and ethnic subcultures with the same thick-bristled brush, in effect redoubling the sense of exclusion and condescension that create the conditions for radicalization in the first place.

Timbuktu—a North African film by a North African director shot entirely on location—cannot be taken up on such charges. In scene after beautifully measured scene, Sissako and his camera look past the Islamists’ self-applied suits of armor—the long black cloaks and sunglasses that cloud their countenances along with their motives. He presents them as mockable man-children prosecuting a violent ideology they don’t really understand (and in one vignette featuring a young man struggling to articulate his piousness for the purposes of a recruitment video, it’s implied that not everyone in the group is a true believer).

Timbuktu’s title and ancient backdrop frame its present-tense tale as a parable, with a cradle of Muslim civilization transformed into a hotly contested battleground between repressive zealots and civilians. The intruders deform custom under the guise of upholding it; a sequence where they use ancient idols for target practice resembles the most sadly eloquent of the cartooned responses to the Charlie Hebdo killings, by the Brazilian Carlos Latuff—in which the bullets fired into the magazine’s offices rip through its walls to strike the mosque next door.

Latuff and Sissako are making the same point: Islamist terrorists may believe they’re ridding the world of infidels. But in reality, they’re disgracing the religious civilization they purport to hold dear—an act of collateral damage that Timbuktu frames sadly and wisely as a timeless tragedy.